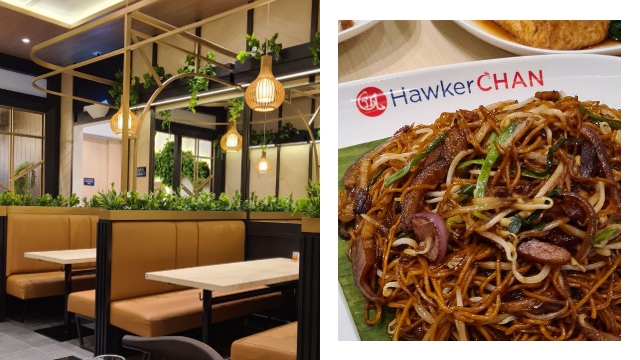 Might Want to Duck-le In: Hawker Chan Is Going Beyond Fast Food

Feast your eyes on the new store opening and menu.

(SPOT.ph) For months now, we’ve been a tad bit overly (yet rightfully) cautious in regards to heading out. Some have said we were due for another spike, but as the months kept rolling around, cases have thankfully and optimistically remained leveled, despite an increase in returning to communal and public living. For those missing the outdoors, this meant a shift in lifestyle from movie marathons on the couch and ordering take-out from an app to watching movies in the cinema and sitting down for a bite at a restaurant. There’s definitely a rush that comes from being in these spaces, which makes them worth preserving.

In the same spirit, the Singaporean fast-food restaurant chain Hawker Chan is opening the doors of its new store location centered on the casual dine-in experience in SM Grand Central on Thursday, May 26th. The soft opening will also arrive with an all-new menu featuring roast duck and a variety of noodle-based dishes.

The interior of Hawker Chan’s new SM Grand Central location features cozy party-sized booths decorated with hanging plants, wooden beams, and droplights that all fit into this minimalist, homey aesthetic. It’s a design that doesn’t draw too much attention to itself, as it instead eases you back into the comfortable dine-in experiences that were shared pre-panini.

The new store concept is said to be focused less on the fast-food design of the existing stores and leans more heavily on customer-centric care with the in-house experience.

Simultaneous with the new store opening, new Singaporean dishes are also being added to the Hawker Chan menu nationwide. The restaurant is introducing Roast Duck and Hainanese Chicken to their menu, which you can eat alongside servings of Fragrant Rice. Also new to the menu are the stir-fried noodle offerings Char Kway Teow, which is mixed with Chinese sausages, eggs, and vegetables, and Stir Fry Char Shiew Noodles, which mixes egg noodles with Charshiew, vegetables, and a savory sauce.

Additionally, you have a chance to win some freebies just for attending the launch at SM Grand Central. On May 26 to 27 and May 30 to 31, if you're one of the first 10 customers at the new store, you'll receive a one-year supply of Soya Sauce Chicken Rice, the signature dish of this formerly Michelin star-awarded restaurant.

Chef Chan Hon Meng’s Hawker Chan finds its humble beginnings as a small restaurant in the Chinatown Complex Food Centre in Singapore. More well-known as one of the most affordable Michelin star restaurants, Hawker Chan came to the Philippines in 2018 and quickly found its base with the Filipino audience.