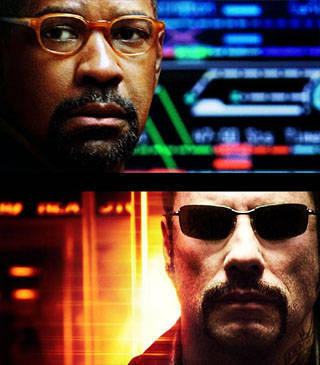 The Taking of Pelham 123: Tracking Tension

Travolta and Washington's hostage drama is one fast-paced, tension-filled ride. 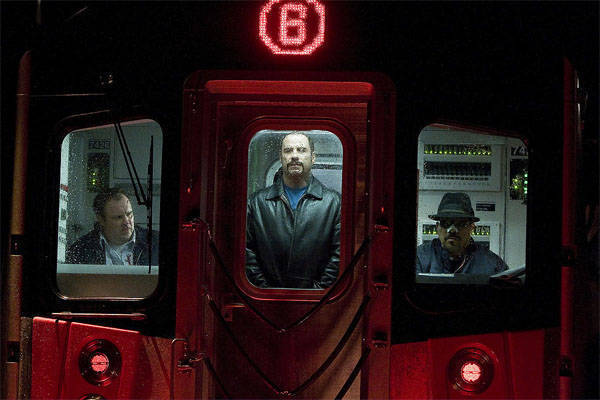 Life in New York City runs at a breakneck pace. To get from one point to another, people are rushing to cars, cabs, and subways. When a group headed by the enigmatic "Ryder" (John Travolta) decides to take over a subway train designated "Pelham 123", taking hostages and demanding a $10M ransom, the entire city takes notice. It's just trains dispatcher Walter Garber's (Denzel Washington) bad luck that he's been chosen to negotiate with Ryder and his terrorists.

From the opening credits onward, The Taking of Pelham 123 immerses you in the fast pace of life in the Big Apple. Differing from past works by Tony Scott like Top Gun, Crimson Tide, and Man on Fire, this particular flick's jump cuts and quicker pacing is more in the line of Scott's Enemy of the State and Domino. As a remake of a 1974 film of the same name, the filmmakers had to update a terrorist attack into a hi-tech, post-911 world: laptops, Wi-Fi, cellular phones, animated schematics, and webcams are used liberally and effectively. Washington takes over from Walter Matthau's Garber while Travolta updates Robert Shaw's role as lead hostage taker.

A main selling point for the film is the interaction between stars Washington and Travolta. It's rare to see Travolta play a villain, and his Ryder is an over-the-top, calculating man who sometimes acts like a petulant child when he doesn't like what he hears. Washington's performance calls to mind his role in Spike Lee's 2006 movie Inside Man, negotiating with a bank robber then and a train robber now. It was interesting to present his Walter Garber as a flawed character who's been accused of taking a bribe, as it provided an entry point for Ryder to have some empathy with him.

Again echoing Tony Scott's work in Enemy of the State was the use of maps and schematics to show distance between two spots. Whereas in the previous film the images were taken for spying purposes, the device is used in Pelham to heighten the tension as money is transferred from opposite sides of the city. Scott clearly uses New York's environs and its grittiness in giving his film a more "urban" feel, a good idea given the subway-hijacking theme.

Like his brother Ridley Scott, Tony Scott has proven time and again to be a more than capable director in the action genre. Of course you'd expect explosions, speeding, tumbling cars, and grown men cussing at each other. Yet there is a surprising amount of human drama here, particularly between Washington and Travolta, that The Taking of Pelham 123 might just be a train worth taking.

To see where the movie is showing, click here.

Movie Review Denzel Washington John Travolta Pelham 123
Your Guide to Thriving in This Strange New World
Staying
In? What to watch, what to eat, and where to shop from home
OR
Heading
Out? What you need to know to stay safe when heading out