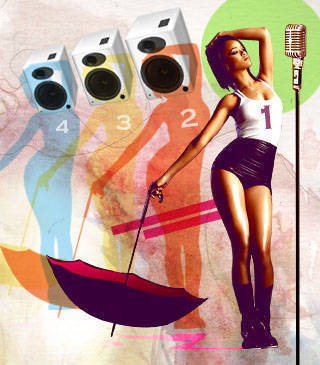 These musicians might think they're honoring their favorite artists by whipping up these covers, but really, who are they kidding?

1. Overplayed songs like "Umbrella" and "Beat It"
Mandy Moore, Marié Digby, KC Concepcion, and a hundred other YouTube singers have recorded laid-back renditions of Rihanna's parasol-touting dance hit. Their acoustic style strips away the funky beats and puts the focus on the lyrics, ultimately going overboard with sweetness.

Ending up with the same fate as "Umbrella," the King of Pop's "Beat It" has been remade countless times by a diverse range of artists–from funny guy Weird Al Yankovic to pop punk rockers Fall Out Boy and even TV 'toons Alvin and the Chipmunks. It's safe to say that nothing beats the original!

Alvin and the Chipmunks:

3. "Closer You and I"
Close-Up did us a disservice when they asked pop rock band Sponge Cola to resurrect their classic jingle (originally sung by Gino Padilla). The revamped tune sounded forced and simply didn't match the raspy texture of Yael Yuzon's voice. Even worse: They made actor Gerald Anderson lip sync the song for the commercial!

4. "I Love Rock 'n' Roll"
Why do pop stars think they've got the license to redo classic rock songs? Case in point: Britney Spears' cover of The Arrows' 1975 rock anthem. Brit tried so hard to sound like a true-blue rocker, but her song was a far cry from Joan Jett and The Blackhearts' awesome, head-bobbing version. (Another example: Hilary Duff's take on The Who's "My Generation.")

Joan Jett and The Blackhearts:

5. "Yellow"
Released in 2000, this beautifully tender though slightly morbid tune put Coldplay on the music map. Jem's rendition retains the same tenderness with the help of a piano, but now it sounds like a background melody for someone's wedding AVP (which isn't always a good thing). Prepare to cringe a little when you hear her croon "luke" instead of "look."

7. "Upside Down"
Some hits lose their magic when certain instruments are taken out, sort of like eating a hotdog bun minus all the condiments–and the hotdog. 6Cyclemind lets go of the electric guitar and synthesizer for their acoustic Two Minds Crack update, wiping out the '80s nostalgia you'd feel when you hear the original. It doesn't help that they sound bored to death as they sing and play their instruments.

8. "How Soon is Now?"
The Smiths' tune gained popularity in the '90s when it was covered by Love Spit Love, then featured in movies and TV shows like The Craft and Charmed. Russian duo t.A.T.u remade the song for their 2002 English-language album, but sadly, their grating, high-pitched shrieks will make you want to cover your ears before they start to bleed.

9. "These Boots Are Made For Walkin'"
Frank Sinatra's daughter Nancy scored a number one hit in 1966 about using her favorite footwear to trample on her loser boyfriend. Jessica Simpson chose to sing the same track for the soundtrack of The Dukes of Hazzard (a movie remake in which she co-starred), and even released a raunchy music video to display her then-toned physique. Sadly, her wheezy singing and lame rapping were anything but sexy.

10. Any Tagalized hit song
David Cook captured the hearts of American Idol 7 viewers when he put his own spin on Mariah Carey's "Always Be My Baby." The totally rockin' song soared to number one in various local radio stations months before he won the title. Soon after, some wannabe–who has mastered the art of copying David Cook's voice and even adopted the moniker David Idol–released the Filipino version called "Ikaw Lang Ang Iibigin." Filipino ingenuity or mimicry at its finest? (On a similar note, look for Miss Ganda's "Sugat sa Puso" which is the Tagalized version of–you guessed it!–Leona Lewis' "Bleeding Love.")

Mandy Moore Gino Padilla Jessica Simpson David Cook Rihanna Coldplay Michael Jackson Britney Spears Kc Concepcion Marie Digby Fall Out Boy Weird Al Yankovic Alvin And The Chipmunks George Michael Limp Bizkit Sponge Cola The Arrows Joan Jett Jem Nirvana Tori Amos 6cyclemind The Smiths
Your Guide to Thriving in This Strange New World
Staying
In? What to watch, what to eat, and where to shop from home
OR
Heading
Out? What you need to know to stay safe when heading out