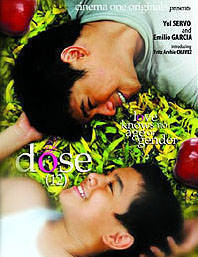 SPOT.ph blogger Ria Limjap wants you to go and see Dose, but warns, "Approach it with an open mind and an open heart. Sometimes we cannot label or simplify all human relationships."

Yesterday, I had the rare pleasure of watching two of my favorite actresses, Irma Adlawan and Che Ramos, strut their stuff on screen and on stage.

Che plays Pia, a lesbian mommy in the experimental play Boy-Gel Ang Gelpren Ni Mommy (written by Sheilfa Alojamiento and directed by Carlo Garcia) at the 5th Virgin Labfest at the CCP. This one-act play is a little gem of a comedy where two kids have to deal with the fact that their mommy is living with another woman. There's partial nudity and lots of cursing, and a funny, sharp script. The three other actresses (Karenina Haniel as Mikhail the teen age son, Unika Zapata as Abigail the pre-teen daughter, and Kimmy Maclang, the butch partner) were all fabulous. And then there's Che, the picture of lipstick lesbian perfection, swanning around in her stripped sundress and perfectly straight hair she asks: is it wrong for two people who love each other to be together?

In Senedy Que's "personal film" Dose, one of last year's Cinema One Originals, this is the disturbing scenario. Edy (Emilio Garcia) is a gay man who turns forty and decides to find the man he loved and broke him. Turns out Edy was a "curious boy" (played wonderfully by Fritz Chavez) whose cold and unloving mother sends him to live with a rich tita (here's Irma, looking fantastic dressed in vintage outfits to fit the period).

Edy escapes his lonely life by watching movies–everything by Ate Vi of course, he can swim just like her in Dyesabel at ang Mahiwagang Kabibe, shake his hips in the manner of Burlesk Queen, or mimic every nuance of Ate Guy's performance in Lino Brocka's Ina Ka ng Anak Mo, or dance the hula like a smoking hot Alma Moreno in her Bomba Star days. Poor sensitive Edy keeps a diary and likes to play with dolls, and he loves smelling the ylang-ylang in the garden. His friend is Danny (Yul Servo), the lusty young gardener who is banging not only the maid next door but also the lonely Tita Helen.

But what Danny and Edy have is special, almost romantic: wrestling in the grass, watching movies, hanging out on the garden swing set. Of course, Edy just a kid looks up to the uneducated gardener as an older brother/father/best friend. The really disturbing part is that no other adult around him cared to notice that maybe something else was going on. We want to shield our innocent children from sexual predators, but sometimes we're too wrapped up in our own preoccupations to care. In the end, Danny leaves without saying goodbye and Edy is broken, both in body and heart.

I felt quite sad for that chubby 12-year-old kid, crying like a girl in his tita's thin arms. The portrayal of Edy's story is unflinching, honest, and subtly observed. It's a nice reprieve from the usual sugar-coated, super obvious movie fare audiences are used to. Go and see it (it's running at Robinson Galleria's Indie Sine until July 7) if you want to see a film that's thought-provoking and compelling. But be warned: approach it with an open mind and an open heart. Sometimes we cannot label or simplify all human relationships.

Hmm. I wonder: what would Allen Ginsberg, beat poet and founder of NAMBLA (North American Man/Boy Love Association), say if he saw this movie?

P.S. Watch for Che Ramos and Irma Adlawan in Mangatyanan (Blood Trail) at this year's Cinemalaya at the CCP!