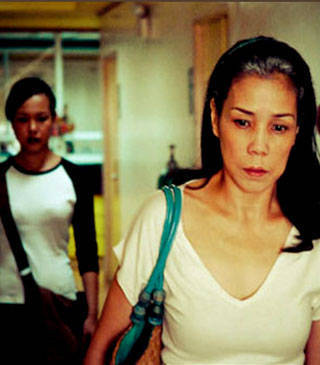 Bravo Cinemalaya! Catch it this weekend

A young woman resolves her painful past in Mangatyanan

I worked on a little film last December and I had the rare pleasure of working with a bunch of hugely talented people, three of them are at Cinemalaya this year. Che Ramos plays the lead in Mangatyanan directed by Jerrold Tarog. Leeroy New did production design for Pepe Diokno's Engkwentro. Irma Adlawan is Fe in Alvin Yapan's Ang Panggahasa Kay Fe. After seeing these three movies (all of which are in competition), I realized all over again how amazing it was that I was able to work with and eventually get to know these folks. It's hard to make movies–it takes a lot of patience, passion, and painstaking work. I have lots of respect for people like Che, Leeroy, and Irma who are getting lots of work because they are exceptionally good at what they do.

Mangatyanan (Blood Trail) is the story of photographer Laya Marquez, whose abusive father lies dying in the hospital. Laya refuses to visit him but pays for his medication. She escapes through her work and she is sent to document an increasingly rare harvest ritual of the Labwanan tribe in Isabela. Laya's story is revealed alongside the complex preparations for the ritual done by the tribal chief and his family. In the end, it is Laya who undertakes the journey of the Mangatyanan and finally resolves her painful past. It's a multi-layered but very taut story, that's one part Carl Sagan homage, National Geographic feature, and best of all Filipino melodrama. The actors are sensational–Pen Medina is effectively creepy as Danilo Marquez, Laya's famous photographer father; Irma Adlawan as the long suffering mother; hunky Neil Ryan Sese as Laya's colleague; a hilarious turn by actress Mailes Kanapi as Laya's chain smoking boss; Madeleine Nicolas as Manang Nida, the tribal matriarch; and Publio Briones III as Mang Renato, the embittered tribal chief. Che herself was fabulous from the first minute. Cinematographer Mackie Galvez did a great job, I think. This was the only movie that made me forget it was digital. Honestly–go and see this one if you can.

Meanwhile. After color-coordinating trash in Smokey Mountain for our movie, I heard Leeroy New had to build a squatter area for Engkwentro, which is the story of two brothers living in the slums of Davao. They are involved in local gangs and petty crimes, but the kuya (Felix Roco) has to skip town because he's wanted by the vigilante death squad, selling meth to make enough money to buy a boat ticket, and trying to save his younger brother (Zyrus Desamparado) from the gang wars. It's an ambitious movie from first-time director Pepe Diokno, who attempts to use one long shot throughout the film. Anyway, Leeroy does a great job with the squatter chic–I guess he was able to imbibe a lot in Tondo. I'm looking forward to his next exhibition because he's an amazing sculptor and all-around cutie.

Last but not least there's the wonderful Irma Adlawan in Ang Panggahasa Kay Fe (The Rapture of Fe) as woman who cannot be saved by any mortal man. Her husband Dante (Nonie Buencamino, j'adore) is an abusive perv, her lover Arturo (TJ Trinidad who is supremely easy to watch) is an ineffectual weakling. It's the classic helpless woman set up but the supernatural framework makes it a brilliant story. And yes, I was squirming in my seat and holding my breath. I would freak out too if someone left a basket of black fruit on my doorstep everyday…

All in all, bravo you guys.

There's still the weekend–certainly enough time to catch a screening at Cinemalaya. See you there!

CLICK HERE to see the screening schedule of Cinemalaya Cinco.

Cinemalaya Mangatyanan Cinemalaya Cinco Ang Panggagahasa Ni Fe
Your Guide to Thriving in This Strange New World
Staying
In? What to watch, what to eat, and where to shop from home
OR
Heading
Out? What you need to know to stay safe when heading out