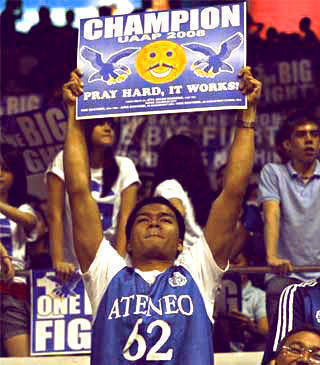 Top 10 Reasons why Ateneo is better than La Salle

Even after a surprising game against the UP Maroons a few weeks ago, the Blue Eagles are back and ready to face their biggest archrivals, the De La Salle Green Archers. Atenean Jason Inocencio tells us why they will shout, "win or lose, it's the school we choose!"

Defending champions Ateneo Blue Eagles have their game faces on as they prepare for their first game this season against their archrivals, the De La Salle Green Archers. Atenean Jason Inocencio defends his alma mater and tells us why in basketball, the Blue Eagles are better than the Archers:

10. La Salle gets into fights with other schools and their players take cheap shots.

In this instance, after La Salle's Rico Maierhofer commits a hard foul on University of the East's Mark Borboran, UE's Mark Fampulme stands up for his teammate. What escalates the situation is a bench player from DLSU, Brian Ilad, clocking Fampulme with from behind. Real classy move.

During the 2005 UAAP Finals, a heated exchange occurred between the Far Eastern University Tamaraws and the Green Archers. One would usually expect the action to be between players from the opposing teams. However, DLSU assistant team manager Manny Salgado snuck from behind FEU's superstar Arwin Santos and hit him with a closed fist. Cheap shot is an understatement.

8. La Salle was once suspended for an entire season for fielding ineligible players on their varsity team.

In 2005, La Salle fielded two players who apparently weren't eligible to play in the UAAP wars. Mark Benitez and Tim Gatchalian supposedly submitted fake Philippine Educational Placement and Testing Certificates of Rating (PETCR) to gain entry into DLSU. Claiming that they voluntarily suspended these players before the UAAP Finals against FEU, La Salle said their school was innocent. The UAAP board disagreed, suspending the school from all athletic competition in Season 69 of the UAAP.

Defensive Player of the Year and UAAP Finals MVP Nonoy Baclao of the Ateneo Blue Eagles blocks a running fade away by the Archers.

6. The Ateneo Blue Babble Battalion gets their spelling right.

In this video, the Ateneo Blue Babble Battalion actually spelled the words "One big fight" during their routine. They didn't just point an arrow or have their cheerleaders threaten to go all Robin Hood on the blue side of the Araneta Coliseum. Oh and a few years ago, La Salle's Pep Squad even spelled "La Salle" wrong during the Cheerdance Competition. Seriously.

The championship game at UAAP's Season 71.

4. Ateneo loves winning UAAP championships, especially when it is against the archrivals from De La Salle.

In the long and storied history between Ateneo and La Salle, every so often they meet in the Finals. Since both teams have been part of the UAAP in the late 1980s, they've met in the UAAP Finals four times. The record: Ateneo 3, La Salle 1. There is nothing sweeter than beating your archrival for the most treasured prize in collegiate basketball.

That's pretty self-explanatory. National heroes versus comedians and singers? Yeah, we thought so too.

2. Ateneo has been around for 150 years. La Salle hasn't even hit the century mark yet.

2009 marks the year of the Ateneo de Manila's sesquicentennial or 150th year, as it was founded in 1859. The De La Salle College didn't exist until 1911. Of course, the University of Santo Tomas has been around for almost 400 years so that trumps all schools in the Philippines, but this article is only between Ateneo and La Salle.

More than a line in the school hymn, it is symbolic of the Ateneo spirit. In sports, where one side wins and another loses, this one line states that even in the face of defeat, the pride of being from the Ateneo keeps our heads held high and that there is no shame in losing to an adversary.

Click here to read Top 10 Reasons why La Salle is better than Ateneo.

Ateneo Uaap Admu Basketball List
Your Guide to Thriving in This Strange New World
Staying
In? What to watch, what to eat, and where to shop from home
OR
Heading
Out? What you need to know to stay safe when heading out