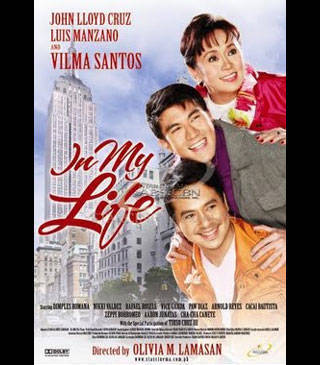 Ria Limjap on 'In My Life': Tearjerker of the Year

I watched In My Life and cried through it without the benefit of tissues, so I sat there and sucked up my snot as the hot tears raced down my cold cheek.   I'm actually glad I was alone, since company in that slobbery state would have been awkward. I haven't cried this much over a movie since The Joy Luck Club. Damn you, Ate Vi. You did it again.

Directed by Olivia Lamasan and written by Raymond Lee and Sennedy Que, In My Life is Pinoy melodrama at it's finest. Why? They have a wonderful script that's funny and sad and subtly observed; it's beautifully shot by Charlie Peralta (who worked on the timidly lovely Ploning); and Olivia Lamasan's dexterity with directing tearjerkers is displayed to perfection in this movie.

It's an absolute treat to watch Vilma Santos play Shirley Templo, a bitter middle-aged librarian who can only dream of dancing in her dreary life. She goes to New York to visit her son Mark (Luis Manzano), and there learns to adjust to his (rather fabulous) gay lifestyle. Shirley knows her son is gay, but in the tradition of the Filipino mother, turns a blind eye to his homosexuality. She can barely tolerate the presence of her son's lover Noel (John Lloyd Cruz), a sweet (and surprisingly adorable) boyfriend. When tragedy strikes, Shirley is forced to face an awful truth about herself: that she's not quite the sainted mother and martyred wife she believed herself to be. Her transformation from shrewish middle-aged mom to a woman at peace with herself is not an easy one, and in the end Shirley is alone but happy. She is able to move on.

Governor Vilma Santos-Recto will always be an actress first and a politician second. In this movie she is as intense as ever–a little over the top, but I guess that's the cannon for melodrama. Luis Manzano, formerly known as Lucky, did not inherit his mother's acting chops but plays the mincingly effeminate and rather self-centered son fairly well. But the real revelation is John Lloyd Cruz, who is heartbreaking in his performance as the secretly suffering doormat of a boyfriend. And yes, I totally take back all the mean things I said about him and his lame romantic comedies. There are many very talented actors who are shortchanged because of crappy scripts and cheesy productions. All John Lloyd needed was to bust out of the clichéd boy-next-door rom-com roles and flex his acting muscles with this character.

In My Life is proof that the big studios can come up with a winning formula: big stars plus great script plus quality filmmaking equals a pretty amazing movie. No doubt it is already raking it in at the box office, and I'm sure it will win awards. But more than that, this film is good for the audience. For me, at least, watching this movie was a satisfying cinematic experience that was entertaining, intelligent, and somehow cathartic.

So go and see it. Don't forget to bring a box of tissues.