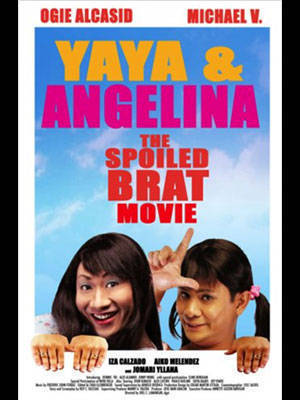 Ria Limjap on Yaya and Angelina: The Drag Show 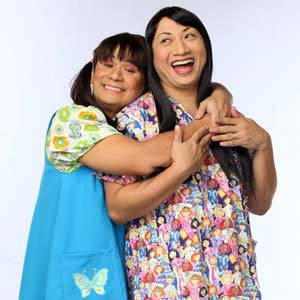 I once heard a young Manila socialite claim she was left to grow up with the maids and drivers. Apparently her politico-taipan type parents didn't have time to raise her, so along with the cooking and cleaning the maids were tasked with taking care of this poor little rich girl, who grew up to be drug addled and severely dysfunctional. (These days who isn't?)

Yaya and Angelina: The Spoiled Brat Movie revolves around a pampered and naughty child's relationship with her long suffering space cadet of a yaya. Michael V dons a glossy black wig and plays Yaya Rosalinda, while Ogie Alcasid in ribbons and lace plays Angelina. It could have been a sharp satire of a socialite's life, but because it's Michael V and Ogie A, it's a slapstick comedy with lots of cheesy special effects and a silly plot involving a terrorist assassination of the Duchess of Wellington.

Directed by Michael Tuviera, this movie is all Pinoy-style patawa, all super kenkoy and   over-the-top. It's chockfull of celebrity cameos, which are apparently meant to be funny. Don't expect wry humor or rapier wit from this comedy which is kind of like a glorified Bubble Gang episode. But you know what–I was sporadically laughing along with the rest of the audience at their ridiculous antics. There's cross dressing and word play! There's Jojo Alejar as a cop! There's mouth-to-mouth resuscitation with a dead fish! There's Aiko Melendez looking thinner! Yay! (Or maybe I was ecstatic from the caramel cake I was eating in the dark.) The one bright spot in this movie: Iza Calzado as the villain, an evil woman who plots the assassination of the Duchess. She's so gorgeous and classy, I think she's the new Cherie Gil. (Catch her in The Echo, the Hollywood remake of Sigaw directed by Yam Laranas.)

Besides the sheer stupidity of this movie, there's some honestly funny stuff mostly from Michael V's interpretation of a yaya who looks like a fat old Saigon whore with a pronounced Bisaya accent. Ogie Alcasid in drag as a little girl is honestly a frightening sight: imagine a dark skinned Oompa-Loompa in pigtails. But in fairness, he whines like a true spoiled burgis brat. If Angelina survives her traumatic and troubled childhood, she actually might someday grow up to become a drug addled and dysfunctional socialite. Now wouldn't that be funny.

P.S.
Looking for something a little more cultured? Watch out for the Spanish Filipino Documentary Film Festival happening at the Cultural Center of the Philippines. Entitled No Todo Es Verdad (Hindi Lahat ng Nakikita Mo ay Totoo)-Pelikula 2009:   Ciclo de Documentales de Filipinas y España, it will be held on October 7 to 11, 2009 at the Tanghalang Manuel Conde.