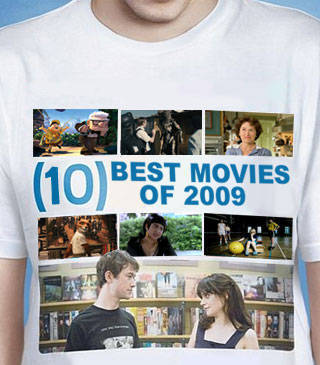 Did your favorites make the list? Andrew Paredes looks back at the best movies from the year that was.

UP. In their 10th computer-generated outing, Pixar soars to new heights of inventiveness and emotion–literally–in telling the story of a cranky widower (Ed Asner) who decides to tether his house to thousands of balloons and go on a trip he had long promised to embark on with his beloved, deceased wife. The result is a hilarious, touching, always unpredictable adventure that features an adorably rotund boy scout, a colorful bird, and a villainous Doberman with a glitchy voice box. Not only does Up ecstatically tell us that it's never too late to live…it establishes a new record for Pixar: This movie will have you sniffling within its first 10 minutes!

KIMMY DORA (KAMBAL SA KIYEME). So it has slapstick. So it has a high-concept premise (bitchy heiress plots against retarded twin sister). So it has a by-the-numbers plot. I'll forgive anything in a comedy as long as it makes me laugh. And that's what Kimmy Dora does: handily, consistently, effortlessly. Newly-minted star Eugene Domingo shares an uncanny quality with Chris Martinez's script: They're both not afraid to be intelligent. And judging by Kimmy Dora's sterling box office receipts last September, this comedy has proven two things: 1) You have to be smart to be funny, and 2) the joke is on producers who have no faith in their audience.

FANTASTIC MR. FOX. Otherwise known as the other great animated feature of the year. In subtracting the humans from his sad-eccentric ethos and adapting the Roald Dahl book via the arts-and-crafts attention to detail of stop-motion animation, writer-director Wes Anderson has conjured up a forest full of jerky creatures outsmarting three pissed-off farmers…and in the process, has come up with his most human film. Meryl Streep, Jason Schwartzman, and Eric Anderson deliver witty voice performances, but George Clooney anchors the fast-and-furious tomfoolery with a suave yet never self-serious turn, giving voice to every human critter who's ever felt like a wild animal trapped by a too-civilized existence.

ENGKWENTRO. Two brothers (Felix Roco and Daniel Medrana) are forced to square off during one dank and dirty night in the slums while simultaneously eluding government-sponsored vigilantes. Engkwentro is yet another entry in the burgeoning sub-genre of films wearing the guise of documentaries, but what it has to say about the desperate breakdown of law and order is eerily prescient given what went down in Maguindanao. This short, brutal, frenetic film's two wins at the Venice Film Festival for director Pepe Diokno is a reminder to never underestimate the power of a youthful, passionate filmmaker.

(500) DAYS OF SUMMER. In most romantic comedies, you'll get maybe half-a-dozen landmark moments: the Meet Cute, the Pop-Song-Falling-In-Love Montage, the Contrived Misunderstanding, the Angry Breakup, the Miserable Fallout, and the Romantic Reunion. (500) Days of Summer is about all the messy, unclassifiable moments in between. Working from an observant, witty script by Scott Neustadter and Michael H. Weber, director Marc Webb chronicles the 500-day relationship between a besotted greeting-card writer (Joseph Gordon-Levitt) and an inscrutable, ultimately unknowable copy girl (Zooey Deschanel) out of order, skipping from day one to day 184 back to day six. In doing so, he captures the time-bending properties of memory and the rollercoaster nature of a truly great love, where you're breathlessly convinced that this is the one that will work out…until it inexplicably, heartbreakingly doesn't.

DISTRICT 9
. If they didn't resemble steel-plated shellfish who talked in clicks and grunts, the minority in director Neill Blomkamp's giddily original sci-fi romp District 9 would be just like any other disenfranchised, ghettoized minority on terra firma: They're hated, they're discriminated against, and everybody is scared of them. The exciting thing about Blomkamp's tale of extraterrestrials forced to seek refuge in modern-day Johannesburg is that mashes up science-fiction convention, documentary filmmaking, and political allegory into something that's never been seen on the big screen before. Director Peter Jackson exec-produced District 9–perhaps because this film was proof definitive to him that there is intelligent alien life outside of Hollywood.

THE HURT LOCKER. What's amazing about director Kathryn Bigelow's war movie is that, in stripping away the Washington politics and the military bureaucracy from her story about a unit of bomb diffusers on a tour of duty in Iraq, it leaves no barriers between you and the harrowing, unfathomable job these soldiers must confront on a daily basis. As the film focuses on the exploits of a beady-eyed Army specialist (played by the revelatory Jeremy Renner), we stare as he stares–sweatily–at the jumble of wires he holds in his hand, at the frightened face of a civilian who has been ruthlessly recruited to be a suicide bomber, at suspicious bystanders holding cellphones to either call a friend or detonate an explosive. The Hurt Locker nails you to your seat for every moment that it makes you want to flee the theater…and then it hits you with the message that, along with its other deadly attributes, war can be the most addictive drug ever.

LET THE RIGHT ONE IN. So you think vampires are dreamy? You may not think so if you happened to catch this Swedish import at this year's Cinemanila festival. Set in the hushed, snowed-in world of a suburban housing development, Let the Right One In tells the story of bullied Oskar (Kare Hedebrant) who strikes up an unlikely friendship with the secretive 12-year-old girl (Lina Leandersson) who moves in next door…at around the time that residents of the apartment complex start turning up dead, broken, and drained of blood. The true subversive delight of this spare, atmospheric horror movie is that, at its dark-blood heart, it really is a romantic coming-of-age story. It's what Twilight would be if it hadn't buried the violent roots of the vampire mythology in all that "You give me everything by just breathing" nonsense.

JULIE & JULIA. It would be tempting to say that, in telling and connecting the stories of Julia Child (Meryl Streep), the towering, lovable culinary titan who made French cuisine accessible to the American masses, and Julie Powell (Amy Adams), the disillusioned cubicle drone who writes a blog about cooking all 524 recipes in Child's Mastering the Art of French Cooking in one year, that writer-director Nora Ephron has come up with her first non-romantic comedy. But that wouldn't be right. Julie & Julia is a tickling love letter to food and everything that makes life worth living: the iron will to be good at something, the generosity of spirit that makes us want to nourish ourselves, our loved ones, our world. And mark my words: For a performance that not only nails Child's goose-honk cadences but captures what a benevolent force of nature this remarkable woman was, Meryl will be walking down the red carpet for a mind-boggling 16th Oscar nomination.

ANG PANGGAGAHASA KAY FE. A woman is trapped between an abusive husband and an impotent former suitor. It's a dysfunctional love triangle that's been tackled many times before in many a Filipino melodrama. But thanks to a mysterious bowl of blackened fruit, the sure hand of writer-director Alvin Yapan, and actress Irma Adlawan–who has found a home for her prodigious talents in independent cinema–what could have been a tired conceit becomes subtle, lyrical, and wonderfully mystifying. This film's international title is The Rapture of Fe–rapturous, indeed.