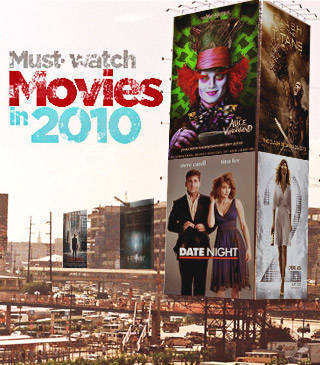 Here's what we can't wait to see this year. By Andrew Paredes

After two decades of working together, you'd think Johnny Depp and Tim Burton would be sick of each other. But just take a look at some select titles from their filmography: Edward Scissorhands (1990), Ed Wood (1994), Charlie and the Chocolate Factory (2005), Sweeney Todd: The Demon Barber of Fleet Street (2007). If there's one thing you can predict about the two-decade Depp-Burton collaboration, it's that it's going to be unpredictable. Their spin on the beloved Lewis Carroll fantasy, with Depp playing the Mad Hatter and newcomer Wasikowska as the 19-year-old who falls down the rabbit hole again to end the Red Queen's (Bonham Carter) reign of terror, should continue that streak.

This story of the Greek myth–about Perseus, the mortal son of the Greek god Zeus, battling Medusa, the Kraken monster, and other minions of the underworld in his quest to save the Princess Andromeda–first unfurled on worldwide screens in 1981 with LA Law star Harry Hamlin in the lead. But fantasy film buffs will forever define the original for its at-the-time groundbreaking, now-quaint stop-motion visual effects, courtesy of industry maverick Ray Harryhausen. This year's retelling has newly minted star Sam Worthington (Avatar) and 30 years' worth of technological innovation behind it–whether it will retain the original's charm is what will be worth checking out.

Carrell and Fey play a couple who steal a reservation at an upscale restaurant to rejuvenate their blah domestic life…and end up with a nightmarish case of mistaken identity. Personally, I find the concept's action elements a tad superfluous–I'd pay to watch these two comics read a phonebook–but the idea of plunking their Everyman-Everywoman charms in the middle of Tom Cruise territory is admittedly intriguing. James Franco, Kristen Wiig, Mila Kunis, and Mark Wahlberg join the festivities.

How do you follow up a movie that defined its decade? By trying to define another f–ked up decade. This time, the iconic trader Gordon Gekko emerges from a stint in jail to find a financial world even harsher than the one he left behind. Sequels are dicey propositions to begin with, especially when you're following in the footsteps of an original that was released to much acclaim and Academy Award validation (Douglas won his only Oscar playing Gekko). But considering what an unregulated stock market has wrought on the worldwide economy, it's easy to see why the always topical Stone decided to direct his first-ever sequel.

Also known as the Super Bowl for Fashionistas, SATC 2 features a detour to Morocco and (reportedly) a flashback to the '80s that traces the earlier years of these four quintessential New York gals. Three interesting questions deserve to be answered: (1) How many more problems can the creators throw in Carrie and Big's (Chris Noth) way? (2) Can costumer Patricia Field pull off "Me Decade" fashions without besmirching her fashion industry cred? And (3) How will these mature actresses portray the earlier years of their characters without, as Candice Bergen's Vogue editor put it, "the unintended Diane Arbus subtext?"

The problem with calendaring local releases is that local film producers don't believe in calendaring their releases. And because scripts are habitually tweaked as long as there is a set to shoot in, information about unreleased movies is notoriously unreliable. But you have to admit, that banner got your attention, didn't it? Can a Sharon-Gabby reunion movie be far behind? Or can Sharon, Gabby, and KC be a happy family at least onscreen?

Yeah yeah, you've been pitched big-screen translations of television shows before. Some have been successful (Charlie's Angels), some have been execrable (Charlie's Angels: Full Throttle). But fans of the original series–which ran for five seasons over NBC from 1983 to 1986–can take heart in the fact that the remake doesn't stray too far from the premise: four ex-Special Forces veterans become soldiers of fortune, evading the American military as they try to exonerate themselves for a crime they didn't commit. The cast is eyebrow-raising: Oscar nominee Neeson takes over for George Peppard as leader John "Hannibal" Smith, The Hangover's Bradley Cooper assumes the mantle of Templeton "Faceman" Peck from Dirk Benedict, Mr. T's successor as B.A. Baracus is UFC light heavyweight fighter Rampage Jackson, and–most intriguingly–District 9's Sharlto Copley takes over from Dwight Schultz as the legally insane pilot "Howling Mad" Murdock. Here's hoping this reboot is as imaginative yet respectful of the source material as J.J. Abrams' take on Star Trek, because if this turns out to be another Mod Squad…well, I pity the fool.

One word: Pixar. Do you need any other reason to be there?

Except for a mind-bending teaser trailer, audiences don't really know much about Inception. Supposedly, DiCaprio plays a CEO who is also something of a criminal. Supposedly, the film takes place in the not-too-distant future. Supposedly, the plot involves technology that allows people to jump into other people's dreams and extract information. All we know for sure is that the film was written and directed by Christopher Nolan, the man who not only rejuvenated the Batman franchise but raised the bar forever for superhero movies with the murky, morally complex The Dark Knight. That's enough of a sell for me.

Cynics think that the climactic entry in the Harry Potter saga was split into two because Warner Bros. wanted to milk this cash-cow franchise for all the money it was worth. I prefer to believe that the filmmakers wanted enough elbow room to include as much of the richness and complexity of the final book as they could. Besides, if you're as devoted a fan as I am–i.e.: someone who re-reads each book right before the corresponding movie comes out–you won't start boycotting the series now, will you?

And because we couldn't limit the list to just ten, here are five bonus movies:

These two genuinely likeable princesses of the masa team up in a Star Cinema dramedy that, for a change, focuses on sisterhood and not just on romantic misadventures.

Ben Affleck follows up his respected directorial debut, 2007's Gone Baby Gone, with this tale of a thief who must grapple with a relentless FBI agent and his feelings for a bank manager connected with one of his former heists as he prepares for his latest caper. I'm watching to see Jeremy Renner (The Hurt Locker) and Jon Hamm (TV's Mad Men) in follow-ups to their star-making roles. For the rest of you, there's Blake Lively, trying to prove there's life after Gossip Girl.

Based on the first three books of a mammoth 15-book series following the adventures of a young barn owl named Soren (Across the Universe's Jim Sturgess) and the unknown avian world he inhabits, this CGI movie is a cross between a talking-animal classic like Watership Down and a fantasy epic like Lord of the Rings. This is also Zack Snyder's (300, Watchmen) first G-rated and fully animated film.

OF ALL THE THINGS/MISS YOU LIKE CRAZY
Starring: Aga Muhlach, Regine Velasquez/John Lloyd Cruz, Bea Alonzo

Okay, okay. Technically, these are two movies. But they both feature successful team-ups reuniting after some time spent apart. (Aga and Regine last appeared together in 2001's Pangako…Ikaw Lang, while John Lloyd and Bea were last seen in 2007's One More Chance.) Which pair still has the magic? It'll be up to us, the audience, to decide.

Because we know we'll never hear the end of it unless you get your "I-wouldn't-want-to-live-in-a-world-without-you-in-it" fix.

Sarah Geronimo Movies John Lloyd Cruz Sharon Cuneta Twilight Harry Potter Robert Pattinson Kc Concepcion Judy Ann Santos Bea Alonzo Gabby Concepcion
Your Guide to Thriving in This Strange New World
Staying
In? What to watch, what to eat, and where to shop from home
OR
Heading
Out? What you need to know to stay safe when heading out