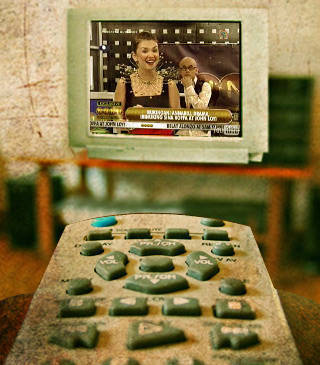 We know you're watching them... SPOT.ph lists down 10 of your secret TV obsessions.

When people say there's too much garbage on local TV, we nod our heads in disgust as if the local stations were demons that needed to be exorcised. Lo and behold, once we get in the comforts of our own homes and lock ourselves up in the privacy of our own rooms, we tune in and cringe in glee as we revel in our supposedly vomit-inducing favorites.

SPOT.ph lists down 10 of our secret pleasures. Oh, and if you're asking why there are none of those telenovelas on the list, it's because those deserve a very special place, sealed in a box shoved deep into the depths of your closet...way deep.

This talk show's a relentless weed. No matter how many times a TV station tries to pluck it out, it always springs up in another one. And just like that other kind of weed, it's highly addictive. Already on its second revival, Jojo A serves up the cheese as a cheap and cheerful copycat of Conan O' Brien (...who we're still mourning over).

Even if some of the show's comedy sketches are horrifically corny, you have to admit that Kris Aquino and Boy Abunda on crack is the funniest thing you'll ever see on-screen. The oddball tandem of Angelica Panganiban and Jayson Gainza on the SNN parody, NNNN, is enough to leave even the most rigid showbiz-monger laughing in between farts.

Food mixed with a heaping bowl of celebs is a recipe for pure, bittersweet, guilty pleasure. We do need to warn you, though, that too many servings of a teleprompter-dependent Janice De Belen feeding guests like her ex-flame Gabby Concepcion is enough to get any couch potato morbidly obese.

Tropang Trumpo's illegitimate lovechild has spawned countless classic segments over its 15 years on television. Some of them include "Muchos Grasas," "Ang Dating Daan" (Alien!) and the now-popular sketch "Ang Spoiled," starring a bratty Angelina (Ogie Alcasid) and her ever-suffering yaya (Michael V). The duo was so infectious that the station decided to give them their own show (Hole in the Wall) and a movie, which are both equally depressing.

We still don't know what's more painful: watching Ruffa G trying to pull off a decent interview or Kris Aquino's perpetually whiny voice? Even with these nuances, people still religiously tune in to the church of Boy Abunda every Sunday for a healthy dose of ABS-CBN-sponsored gossip to satisfy their inner chismosos and chismosas.

Of course if you're a hardcore Kapuso (cool oxymoron), you'll be tuned to GMA where John "Sweet" Lapuz shakes his booty (searing mental image) to the sound of "Don't Lie To Me." Although it's seemingly mostly scripted, we still watch it to see Sweet torture celebrities and starlets with his questions while torturing us with his tacky dance steps.

Honestly, whatever good comedy the Iskul Bukol trio dished up in the '70s died a long time ago. But because of the horrific OFW-loving train wreck that is Wowowee, droves of viewers still choose to be solid EB fans. With segments like Bulagaan and the enjoyable Pinoy Henyo, it truly is the saner noon-time choice.

We forgive Lucy Torres for doing Shall We Dance? because the woman can really command a dancefloor. We can also forgive her for her ultra-mild-mannered hosting, since Wilma Doesnt's corny quips balances it out. And it's a little hard to watch the show's ridiculous crafts segment set to elevator music. But the coffee-and-milk, spicy-and-sweet contrast and interaction between real-life friends Wilma and Lucy seems genuine and uncontrived, a perfect time-killer when you have nothing really to do.

Sometimes it's lame, sometimes it's not, but mostly it's just sinful. This overly-manipulated social experiment with a booming manly voice playing god has turned a chunk of the population into drama-hungry voyeurs waiting for something scandalous or cute to happen. What's worrisome, though, is how these complete nobodies will eventually end up as the future idols of Philippine entertainment for months to come...or years, if they're lucky.

Spoon Nnnn Pbb Asap The Buzz The Sweet Life
Your Guide to Thriving in This Strange New World
Staying
In? What to watch, what to eat, and where to shop from home
OR
Heading
Out? What you need to know to stay safe when heading out