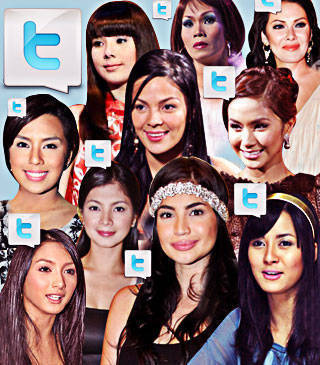 Ashton Kutcher was the first to rack up a million followers in 2009, beating out CNN Breaking News, and more celebs–foreign and local–are jumping on (or off) the Twitter bandwagon in 2010. Who's been posting their 140-characters' worth? SPOT.ph lists the top 20 local stars with the most Twitter followers (as of posting time): 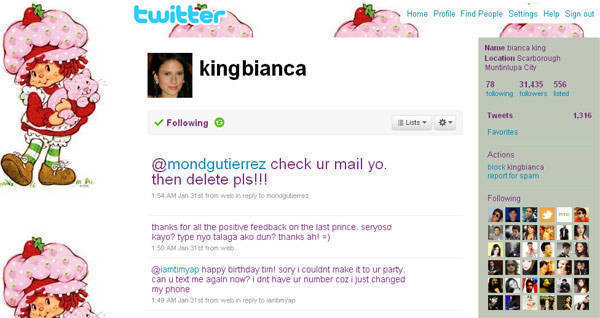 20. Bianca King
Number of followers: 31,435
Bianca King first appeared in TV commercials and print ads at 13, before acting in series like Mulawin, Marimar and Zorro. Known for portraying empowered characters on TV, King is also the current product endorser for the touch-screen phone HTC Passion.

Twitterati Trademark: Balancing school and showbiz is a challenge Bianca faces every day–clearly the reason why most of her twitter updates are about it.

Sample Tweet: "pardon me for being self righteous abt school & showbiz sometimes." 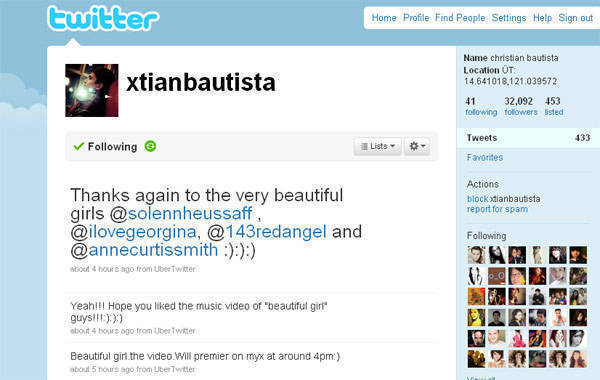 Balladeer Christian Bautista started his career in ABS-CBN's Star in a Million. His songs have reached international airwaves and his albums are chart toppers in Malaysia, Thailand and Indonesia.

Sample Tweet: "Hey guys! I'll be jumping from one country to another to promote our new album:) I'm not leaving anyone behind don't worry:)"

Former child actress Camille Prats became famous for her role as Sarah in Sarah, Ang Munting Princesa. She was also a mainstay in Ang TV. She shed her wholesome image when she posed for the June 2006 issue of FHM Philippines.

Twitterati Trademark: This former child star's twitter account is filled with replies and retweets. As she says, "In twitterworld, there are no strangers. Lahat magkakaibigan. Panatilihin naman nating ganito ito. Its suppose to be a happy place! :)"

Radio DJ Mo Twister is famous for the controversial radio show, "Good Times with Mo," where he asks celebrities intimate and provocative questions. He is also known for his much-publicized feuds with fellow celebrities Maui Taylor and Rufa Mae Quinto.

Twitterati Trademark: As expected, Mo's twitter updates are full of sarcasm and humor.

Sample Tweet: "Stuck in traffic and forced to be visually hijacked by the set of male testicles that bench billboards consistently showcases on EDSA. Damn." 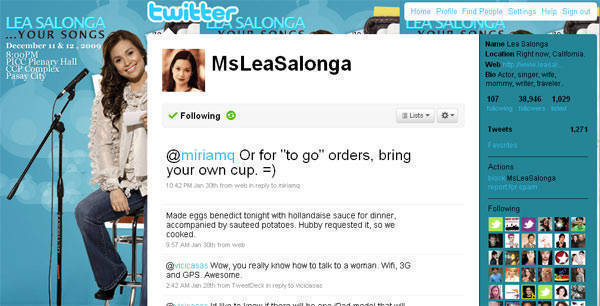 Award-winning singer and stage actress Lea Salonga first captivated the Philippine audience as a child star appearing in That's Entertainment and in various Repertory Philippines stage plays like Annie and The King and I. She broke into the international scene when she bagged the role of Kim in Miss Saigon and won both the Tony and Olivier awards for her performance. She is set to star in the Philippine run of the Broadway musical, Cats, in October.

Sample Tweet: "@PerezHilton Funny, but a lot of the notorious ones are straight. Pedophilia knows no gender and this BS is caused by irrational fear."

Twitterati Trademark: This actress is notorious for flooding replies to both fellow celebs and fans with approximately more than 10 updates an hour.

Raymond Gutierrez started out as a child star along with his twin brother, Richard, and is currently co-host of GMA 7's Showbiz Central. Gutierrez is also Preview Magazine's Society editor-at-large.

Sample Tweet: "I wakeup in the morning panicking about how il achieve everything on my to do list, & i go to bed wondering how il do the rest tomorrow. FML" 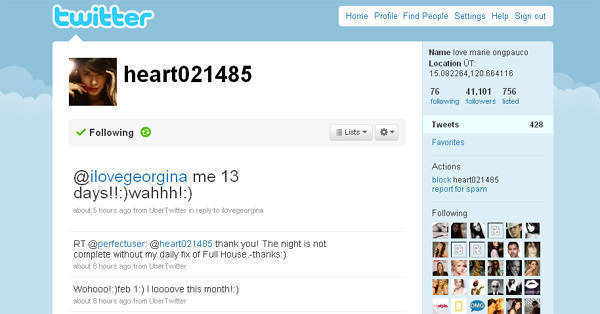 She appeared in numerous TV commercials and teeny-bopper shows before she crossed over to more dramatic roles in the TV series Asero and Luna Mystica on GMA 7. She was last seen as the rebellious daughter in Mano Po 6 and is currently hosting QTV 11's Fashionistas by Heart and plays the lead role of Jessie Han in the local version of Full House.

Twitterati Trademark: Her updates are a mix of retweets and replies, but how she replies to her fans is notable. She said in response to a fan: "I think real heartists should be happy and supportive when it comes to their fav artists personal life...they shouldn't be selfish."

Sample Tweet: "South beach diet...I'm having garlic rice and tuyo on my birthday for sure!:)" 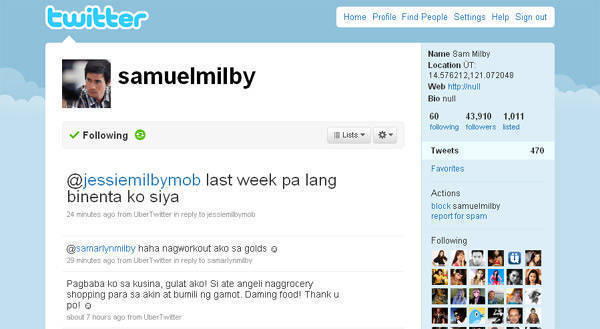 With his boyish good looks, Sam Milby became the poster boy for romantic lead actor after his stint in Pinoy Big Brother in 2005. His first big screen debut was for the romantic drama, Close to You. He's been paired with local actresses Toni Gonzaga, Bea Alonzo and Anne Curtis in various films.

Twitterati Trademark: Fans of Sam Milby rejoice! He talks to his fans on Twitter and even gives them tidbits of how his day is going. 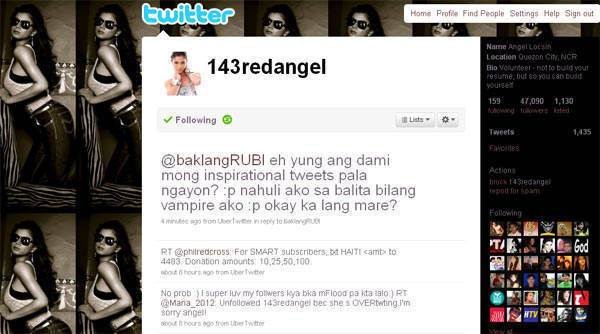 Twitterati Trademark: Her Twitter page is a fan's dream come true–she replies to fans and even gives in to requests such as a congratulatory greeting for passing the nursing board exams.

10. Cristine Reyes
Number of Followers: 51,030
2009 was a good year for Reyes; this Starstruck grad was named FHM's Sexiest Woman in the World and nominated Best Actress for Eva Fonda in the Seoul International Drama Awards.

Twitterati Trademark: Reyes tweets about anything under the sun, from "making bawi" to Tim Yap to her sparkling lollipop. 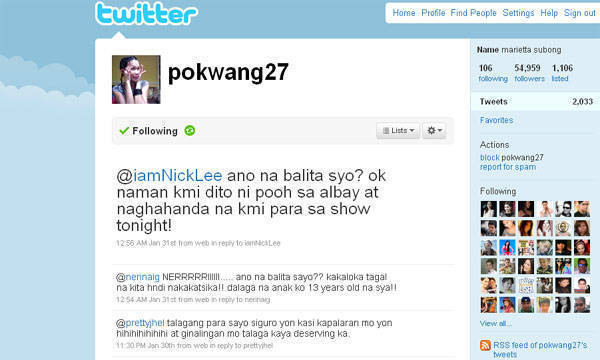 Though she co-hosts Wowowee in addition to singing and acting, Pokwang (Marietta Subong in real life) is best known as a comedian who does impressions of personalities like Dionisia Pacquiao and Annabelle Rama.

Twitterati Trademark: With her elongated vowels and excessive punctuation marks, you can almost hear her voice while reading her tweets. 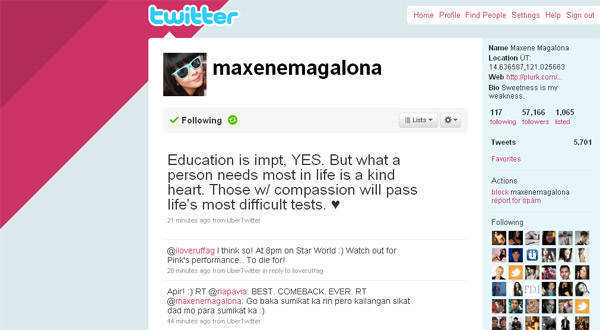 Born to a showbiz family, Magalona made her first TV appearance in Ang TV. She took a break from the business in 2004 to concentrate on college, turning down the role of "Alwina" in Mulawin (a part that made Angel Locsin a star). She is currently being linked to Ultimate Survivor JC Tiuseco, her co-star in Sana Ngayong Pasko.

Twitterati Trademark: Magalona usually has a sarcastic rebuttal for her haters on Twitter and a sweet thank you for those who play nice.

Sample Tweet: "I'm one step ahead of u. Blocked u a long time ago pa :) RT @Maria_2012: Unfollowed @maxenemagalona because she is OVERtweeting. I'm sorry!"

7. Nikki Gil
Number of Followers: 62,220
After crooning her way to showbiz with her viral Coke commercial in 2005, Gil is now a certified singer and actress. This year, she stars as Elle Woods in Legally Blonde: The Musical.

Twitterati Trademark: Tweets about her projects, chats with her friends and shares how she chills, almost always with a sweet emoticon. 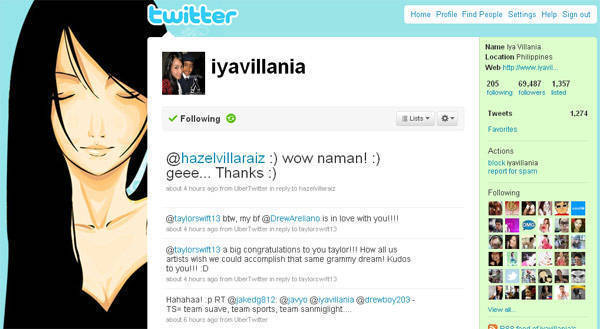 Villania, who was born in Australia, is a MYX VJ as well as host of Us Girls together with Cheska Garcia-Kramer and Angel Aquino. She was part of the Lamang Lupa episode of Shake, Rattle and Roll XI, an entry to the 2009 Metro Manila Film Festival.

Twitterati Trademark: She uses Twitter to chat with her friends and fans, to share the latest on her projects, and even to jokingly (or not) tell off her boyfriend, TV host Drew Arellano.

Sample Tweet: "@taylorswift13 (Taylor Swift) btw, my bf @DrewArellano is in love with you!!!!"

5. Mariel Rodriguez
Number of Followers: 70,067
Rodriguez is one of the hosts of Pinoy Big Brother, where she was a surprise celebrity housemate in 2007. She was part of the star-studded cast of the Cinemalaya 2009 entry, Astig. 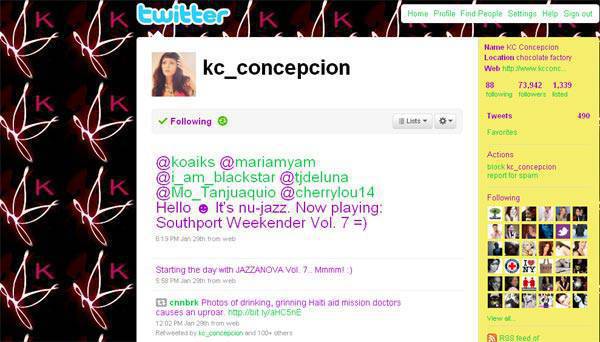 4. KC Concepcion
Number of Followers: 73,962
A graduate of the American University of Paris, Concepcion recently wrapped up the Koreanovela remake, Lovers in Paris. She has had two movies with matinee idol Richard Gutierrez: For The First Time and When I Met U.

Twitterati Trademark: In between chatting with celeb friends like Bubbles Paraiso and Iya Villania, Concepcion tweets about her latest projects and humanitarian efforts.

Sample Tweet: "We can help Haiti TODAY... Give â™¥ by getting Haitians out of hunger, through it all. http://bit.ly/8CocYy."

3. Ruffa Gutierrez (private account)
Number of Followers: 81,913
With fellow hosts Kris Aquino and Boy Abunda, Gutierrez dishes out the latest gossip on The Buzz every Sunday. She played fiancé to her former reel and real partner, Zoren Legaspi, in Shake, Rattle and Roll XI in the 2009 Metro Manila Film Festival. 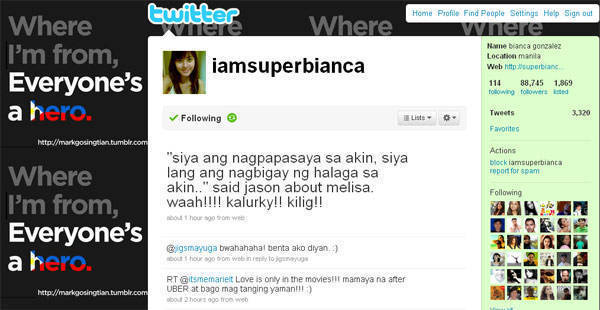 Twitterati Trademark: Doesn't skimp on the replies. Plugs her shows Pinoy Big Brother and Y Speak, and even her friends' such as Mariel Rodriguez' Love Is Only In The Movies.

Sample Tweet: "wow! how time flies! i've been replying to tweets for one hour na! galing how twitter connects people grabe! thank you everyone! :))))" 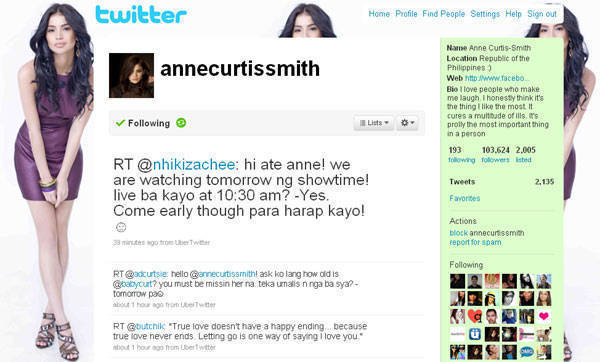 Magic Kingdom's princess in her early days in showbiz, Curtis is now the host of popular reality talent show, Showtime. She was named Best Actress for Baler in the 2008 Metro Manila Film Fest.

Artwork by Warren Espejo. Photos by Noel Orsal of PEP.ph.