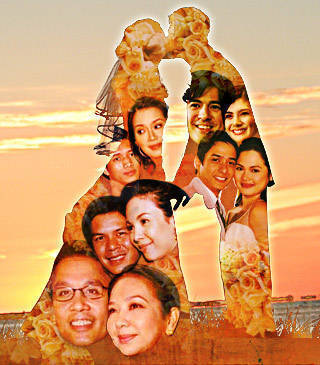 10 Most Talked-About Weddings in Philippine Showbiz

SPOT.ph revisits the most famous celebrity "I dos."

Still intoxicated by the post-VD love-is-in-the-air air, SPOT.ph revisits the love stories and legendary weddings of some of the Philippines’ most prominent people in show business. Here are 10 of the most talked about "I dos" in the past three decades:

It was the hard rain that forced the couple to meet during a National Press Club event in 1998. Four years later, they had their first leisure ice cream date at the Araneta Center, spurring a seven-year romance which eventually led to a proposal at the Abaca Beach Resort in Cebu.

In a shameless display of affection, a teary-eyed Mar Roxas publicly professed his undying love for his celebrity newscaster girlfriend amidst the giddy shrieks of Wowowee audience members on April 25, 2009. A few months later, the couple swapped rings in what the Manila Bulletin described as the "wedding of the year." The ceremony was held at Sto. Domingo church with an estimated attendance of 4,200 guests composed of political and showbiz personalities and their relatives.

Having met several times during Ryan’s early days in showbiz, it seemed like the two were only meant to be acquaintances. But after being forced to work together on the set of Krystala in 2004, where Judy Ann played the title role and Ryan played her beau, the two eventually warmed up to each other and fell in love.

In the summer of 2009, the country was pleasantly surprised to learn that the couple got wed in a private ceremony at San Juan Nepomuceno church in Batangas with a very select guest list of 80, comprised of close relatives and friends. Stars like Sharon Cuneta, Ogie Alcasid, Regine Velasquez, and Agot Isidro were present at the event as matron of honor and wedding singers, respectively.

To say that Claudine and Raymart’s relationship started out rocky is an understatement. Their love affair was subject to public scrutiny after the untimely death of Claudine’s ex-flame, Rico Yan-but the two overcame the tabloids. The happy couple originally planned their nuptials in 2005, but decided to move it a year later in fear of "sukob" (pun intended).

The couple had their dream wedding at the elegantly set-up golf course of the majestic Tagaytay Highlands. Everything was designed based on the couple’s requests: the gown and suit, the flowers, the four-course menu, the cake, the gazebo, and even the wedding song. Their close friends from showbiz including Kris Aquino and James Yap, Charlene Gonzales and Aga Mulach, Richard Gomez and Lucy Torres, Dolphy, and the top honchos from both ABS-CBN and GMA, graced the event. The wedding was attended by at least 350 people, and witnessed by thousands of viewers who tuned in to the TV broadcast.

Everyone was shocked when Kris Aquino revealed in an interview on The Buzz that she was already married-twice-to her then short-time boyfriend, PBA player James Yap. The two were introduced by Yap’s manager in February of 2005 before they started dating exclusively.

The couple tied the knot for the second time in a secret ceremony at Boy Abunda’s house officiated by Mayor Sonny Belmonte. Their wedding reception was held at the same place, where Abunda reportedly cooked Kare-kare and Sotanghon for the five close friends in attendance. Their first wedding took place on May 28. 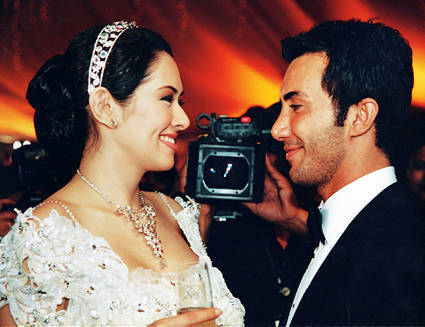 While covering the Cannes film festival in May 2000 for The Century Productions of Los Angeles, Ruffa Gutierrez met Yilmaz Bektas. Yes! Magazine says it was love at first sight. Yilmaz wooed the former beauty queen with his persistence, officially making them one of the most internationally-publicized couples for the next three years.

The two became husband and wife after a lavish, star-studded ceremony held at the NBC Tent at the Fort, which was filled with 800 guests. Aside from the jewelry-embossed cake, 66 varieties of flowers, and P2,500-per-plate dinner, the happy couple announced that they were expecting the arrival of their first child in August of the same year.

Unfortunately, the fairy tale was cut short in June 2007 when Gutierrez publicly revealed their marriage problems during her stay in Istanbul. The couple called it quits in 2008, but Ruffa says that she and Yilmaz still stay in touch for the kids.

Their love story is definitely one for the books. There was no courtship nor dating, just a simple question between two long-time friends after a routine dinner which led to Charlene walking down the aisle in an off-white, off-shoulder, four-and-a-half meter long gown.

The wedding was held on a rainy morning at the St. Joseph the Worker Church in Baguio City. The two swapped vows in a live televised event that Yes! Magazine claims had the biggest TV ratings in 2001. The emotional newlyweds faced their friends and families as they announced they were expecting the arrival of their twins later that year. Some prominent guests that showed up were Charo Santos-Conco, Richard Gomez, and principal sponsors Vilma Santos and the late Fernando Poe Jr. 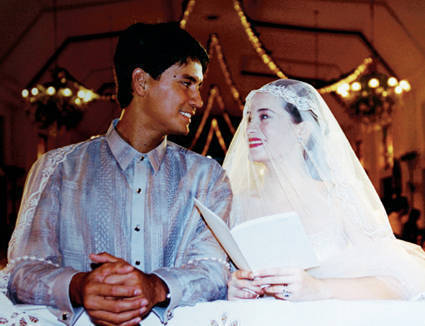 It was a Lux shampoo commercial series which began airing in 1993 that introduced the unknown heiress to the popular actor for the very first time. Lucy said she was excited to meet her long-time crush back then, but she was even more ecstatic when he finally asked for her hand in marriage.

The two got hitched at Saints Peter and Paul Parish in Lucy’s hometown of Ormoc, Leyte in front of their families and friends. The couple reportedly had three receptions. The first was a pre-wedding party for the workers at the Torres’ hacienda. The second was a post-wedding reception for the hundreds of Ormoc residents and the Torres’ acquaintances, while the simultaneous third reception was for the wedding guests which included personalities like Aga Mulach, brothers Anjo and Jomari Yllana, John Estrada, sponsors "Mother" Lily Monteverde, Mayor Sonny Belmonte, and Senator Sergio Osmeña.

Francis "Kiko" Pangilinan met the then-annulled Megastar during his brother’s wedding in 1993. Sharon initially didn’t find him attractive until they went on their first hot chocolate date at the Shangri-la Makati. The two officially became an item in 1994. It took a lot of coaxing from the political activist before Sharon finally put her past marriage behind her and said "Yes."

The two tied the knot in a very private ceremony attended only by Kiko’s siblings and principal sponsors Helen Gamboa and husband Tito Sotto III. According to Sharon’s mom Elaine Gamboa-Cuneta, the two had originally planned to hold the wedding at a hotel, but she insisted that they relocate it at her house since Sharon expressed that she didn’t want a "circus" similar to her first wedding.

After what was described as a whirlwind romance with then model-turned-actor, Edu Manzano, Vilma Santos eventually found love at the disco. In 1985, the young and persistent Ralph Recto asked her to dance with him and the rest was history. The two were married in a formal ceremony held at the San Sebastian Cathedral in Lipa City, Batangas. The wedding was tagged as the historic joining of movies and politics in holy matrimony, with guests ranging from President Fidel V. Ramos to "Mother" Lily Monteverde, and from Eduardo "Danding" Cojuangco to Lourdes Jimenez, better known as "Inday Badiday."

From their lovey-dovey exchanges in 1981’s Dear Heart (not to mention their other eight films together) the young showbiz couple brought their on-screen romance to real life when they got married in one of the most publicized weddings in recent history.

Still both just 19 years old, the two tied the knot in front of family members and thousands of frenzied fans lining up the street and flooding the entrance of the Manila Cathedral. The wedding was complete with police escorts and a grand reception, all provided for by their principal sponsor, President Ferdinand Marcos.

Two years after their daughter KC was born, the couple split up after it was confirmed that Gabby was already married to another woman.