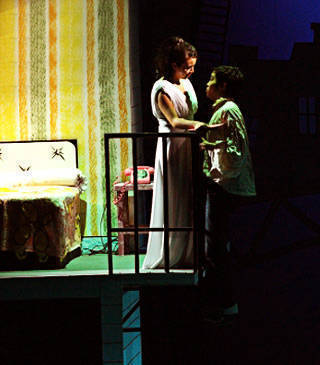 Pick up some romantic moves from Repertory Philippines' "Romeo and Bernadette," just in time for the month of love. 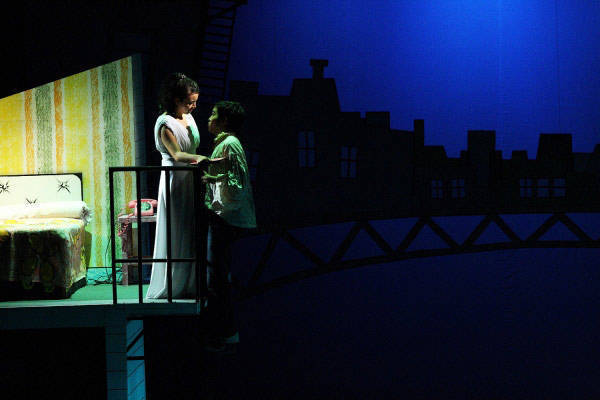 It may be 2010, but the dating scene is still as tricky as it was in the time of Romeo and Juliet. We picked up some ideas from Romeo & Bernadette, Repertory Philippines' campy take on the Shakespeare classic:

1. Don't take a girl to a tragic play if you want some action. That's unless you want to create a whole new ending to Romeo and Juliet, like Romeo & Bernadette's Brooklyn Guy did for Brooklyn Girl.

2. Go cheesy. In the time of reblogs and 140-character posts, eloquent wooing–even if it's not in iambic pentameter–is just plain memorable.

3. Sing your sentiments. But if you've got a voice that could bring out the worst in Simon Cowell, have a friend or the pros do it for you. If you can carry a tune…

4. Call for backup. A supportive audience is always a good thing. At the very least, you won't be alone if the neighbors decide to start throwing tomatoes your way.

5. Find something in common. Whether it's being members of high-ranking families in the mafia scene or something less dramatic like a love for pasta, common ground makes things interesting.

6. Take a chance. Who knows, that sleazy-looking guy or that decibel-challenged girl might just be what's missing in your life.

8. Redeem yourself. Like Romeo's friend Dino, show that girl you've been chasing that you're more than someone who steals a girl's address from another guy. (How you do it is up to you.)

9. Break out of your pattern. Be open to anything–like a new wardrobe, for example. Sometimes it really helps when you dress to impress. Hey, it worked when Romeo ditched the tights for a pair of jeans.

10. Don't settle. Just because someone seems perfect doesn't mean they're perfect for you–even if everyone else thinks so. Tito would have made the perfect protégé for her mob-boss dad, but that didn't stop Bernadette from going for sweet-talking Romeo.