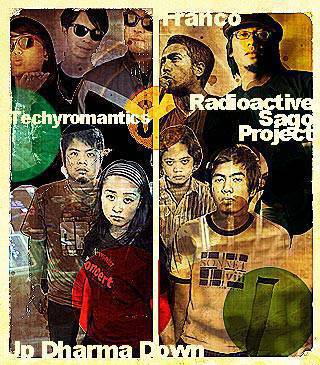 Itching to check out some local gigs? SPOT.ph lists down 10 established and promising bands you need to watch these coming months.

YouTube videos and mp3 tracks can never take the place of seeing and hearing musicians perform live. The vibrant music scene of the swinging '70s and the eclectic '80s can attest to that. But the beat changes, so to speak. Old genres are blurred into pots of obscure and exciting fusions. As younger faces populate the stage, new crowds are also formed, wooed by the interesting taste of their musical soup.

SPOT.ph zeroed in on 10 of the many local acts, both new and not-so new, you should catch when they hit the bars and events circuit these next few months.

Franco
Aptly dubbed as the new superband of alternative rock, the guys from Urbandub (guitarist Gabby Alipe and drummer JanJan Mendoza), Parokya ni Edgar (bassist Buwi Meneses), and Queso (guitarist Ocho Toleran) have teamed up to form a rock group whose powerful riffs, which complement the distinct vocals of Franco Reyes, rivals the sound of many international alternative acts today. Their potent mix of post-grunge and subtle touches of reggae (Song for the Suspect, Touch the Sky) amplified by the band's on-stage charisma make their live shows enjoyable for both die-hard fans and rock show virgins.

Radioactive Sago Project
What do you get when you cross spoken word with a funky mix of jazz rock? Ask RSP front man Lourd de Veyra. He and his talented band of musicians (Wowie Ansano on trumpet, Rastem Eugenio on saxophone, Pards Tupas on trombone,   Junji Lerma on guitar, Francis de Veyra on bass, Jay Gapasin on drums, and Arwin Nava on percussion) deliver suave and energetic sets every time they face the crowd. With Lourd's whip smart words in time with hot political and entertainment issues (e.g. PGMA's Garci snafu or insane Arthro commercials), each performance is destined to be an interesting experience.

Up Dharma Down
With their 2006 release of Oo, a smooth eclectic rock track about unspoken love, the band crossed-over from underground to mainstream consciousness. Now geared to take on the international music scene, UDD still makes time to perform in front local crowds waiting to be blessed with Armi Millare's magnetic vocals backed by the progressive combination of Ean Mayor on drums and loops, Carlos Tanada on guitar, and Paul Yap on bass. Their live performances never fail to draw excitement from their faithful followers and new-found appreciation from first-time listeners.

Milagros Dancehall Collective
This five-man crew will make you believers of the power of Reggae. With several Rastafari-inspired acts already in the gig scene, this band from Makati definitely stands out thanks to their playful twist on Dancehall beats. Their sessions stay fresh, upbeat, and authentic. They even have the Jamaican accents pinned-down. A hearty mix of covers and originals is enough to please a crowd not accustomed to "the love."

Techy Romantics
They're not quite trip-hop nor strictly electronic. The trio of Camyl Besinga (vocals), Dondi Virrey (rhythm and beats), and Ryan Villena (guitar) prefer to call their complex sound chillectro–an infectious brand of light electronica sprinkled with just enough pop sensibilities to transform their laid-back tracks into something more danceable. The synthesized beats scattered evenly throughout their sets give out a mild New Wave vibe that '80s kids can definitely move their bodies to.

Sleepwalk Circus
People who have never listened to shoegaze and dream pop before will definitely be in for something special when they step into a Sleepwalk Circus show. With their messy bursts of ambient sounds, ethereal layers, distorted guitars, and breathy vocals, their product can be best described as organized noise. It's always perfect to close your eyes and get lost in the melding of notes as they take you on a dreamy escapade of sounds. Of course, witnessing all the different components coming together on stage is also as equally amusing.

Pedicab
Unlike the other projects of ex-Eraserhead Raimund Marasigan (Sandwich, Cambio,   and Squid 9), Pedicab is the most manic. The group, comprised of Marasigan (keyboard), Diego Mapa (vocals), Mike Dizon (drums), Jason Caballa (guitar), and director RA Rivera (multimedia), stir their audience into a frenzy as they feed them with zany doses of dance-punk. The members also perk up the crowd either through queer choice of playful garbs or funny little gimmicks that spice up the show.

Outerhope
If rowdy and rambunctious isn't your thing, then brother and sister act Outerhope is a good option for a light and stress-free night at a bar. Armed with only a guitar and an electric keyboard (and occasionally, a xylophone) Mike and Mick Benedicto offer simple yet whimsical melodies on top of quirky lyrics. Much like their original recordings, their live acts play out like a set of inverted lullabies that gently rock you awake as you listen.

"My Emptiness" performed live at the Esplanade Outdoor Theater in Singapore

Ciudad
Cute, happy, and mellow are some of the words you might   use when describing this band's shows. Their sets are almost void of theatrics, but the occasional puns provided by its charming vocalist, Mikey Amistoso, is enough to keep the crowd happy. Their music is an aggregate of cheerful melodies and contrapuntal nerdy lyrics, resulting to sweet tracks full of melancholy. With the rumors of a looming hiatus in the near future, it would be best to catch Mikey, Mitch (drums), Justin (guitar), and Jeff (guitar) perform in the next couple of months.

"So Blue" performed at Al's Bar

Sinosikat
Their gigs, a mishmash of uptempo and slow beats, promise to keep both old and young listeners hooked throughout the entire set. Kat Agarrado, the titular siren in the band's name, provides the sass, sophistication, and the sexiness with her soulful vocals and strong command of the stage. Band members Noel (bass), Reli (drums), David (keyboard), and Nick (guitar) supply just the perfect balance of jazz, funk, and rock to carry Kat's voice to a whole different level of sound that is intrinsically Sinosikat.

Radioactive Sago Project Sinosikat Pedicab Bands Up Dharma Down Ciudad Sleepwalk Circus Drip Techyromantics Franco Milagros Dancehall Collective Gig Scene
Your Guide to Thriving in This Strange New World
Staying
In? What to watch, what to eat, and where to shop from home
OR
Heading
Out? What you need to know to stay safe when heading out