The End of the World As We Know It? Top 10 Disaster Movies
Loading
Already a member? Log in
No account yet? Create Account
Spot.ph is your one-stop urban lifestyle guide to the best of Manila. 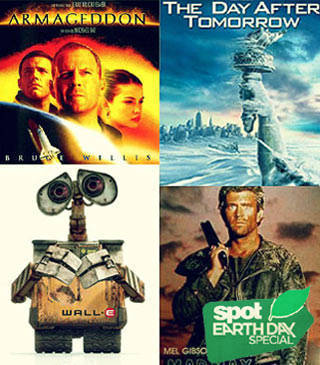 The End of the World As We Know It? Top 10 Disaster Movies

Just to remind us of the Apocalypse that might await us if we don’t save the planet.

To mark the 40th Mother-the-Earth Day, we list 10 movies that dared to entertain the thought of the Apocalypse (or variations thereof) by way of a giant asteroid, a dying sun, and, of course, habits that are downright unfriendly to the Earth. ï¿½ Bottom line: What on earth are we doing, people? We can’t afford to take our planet for granted any longer-it’s the only home we’ve got!

Liquid dreams. There’s no telling what people will do in the name of water.

Plot planet: It’s 30 years after an Apocalyptic event transpired and the Earth has become a wasteland. Water is a commodity that’s sought after by the survivors. The hero is Eli (Denzel Washington), who’s almost like a post-Apocalypse preacher...only cooler and deadlier. The villain is Carnegie (Gary Oldman), a guy with a Messianic Complex.

Disturbing details: Some survivors have turned into cannibals, trapping, killing, and butchering travelers who come their way.

Scary line: "People had more than they needed. We had no idea what was precious and what wasn’t. We threw away things people kill each other for now," observes Eli.

End notes: If you’re stuck hopeless in a post-Apocalyptic spot, you better hope that someone like Eli comes along. He quotes from the Bible and carries a machete, a combination that’s very effective in the era he lives in.

Plot planet: Scientists learn that the Earth’s core is heating up and the planet may soon explode. So, they construct "arks" to ensure that enough people survive the so-called Apocalypse. Earthquakes, tsunamis, floods, and other environmental disasters ensue when the dreaded year comes around.

Disturbing details: The movie capitalizes on the belief that the world will actually end in 2012. There are predictions that December 21, 2012, the end of the Mayan Calendar’s 5,125-year cycle would also signal the Earth’s expiration.

Scary line: "Six months ago, I was made aware of a situation so devastating that, at first, I refused to believe it. However, through the concerted efforts of our brightest scientist, we have confirmed its validity. The world, as we know it, will soon come to an end," discloses US President Thomas Wilson (Danny Glover).

End notes: Don’t take anyone who’s paranoid to see this movie. The next thing you know, they’ll be building their own arks.

Love machine. trust a robot to teach us how to be kinder to our planet.

Plot planet: The year is 2805 and only a quirky little robot named Wall•e is left after the Earth has been literally trashed. Wall•e is actually a Waste Allocation Load Lifter Earth Class. He is "a solar-powered mobile trash compactor robot." In his quest for useful trash, Wall•e has actually become "more human." One day, he finds a seedling, which indicates that the Earth can become habitable again. Suddenly the human survivors who have been living in a spacecraft for many years show interest in returning to Earth. This causes trouble for Wall•e. But he finds love along the way.

Disturbing details: After many generations of living in almost-zero gravity, the surviving humans have morphed into blobs.

Scary line: "Wait, that doesn’t look like Earth. Where’s the blue sky? Where’s the grass?" asks Captain B. McCrea, commander of the Axiom, the spacecraft housing the human survivors.

End notes: Wall•e is so adorable that you almost forget that the movie paints a very bleak scenario for us all.

Walking on sunshine. Learn to love the sun. (Or, at least, don’t hate it so much.)

Plot planet: Set in 2057, the movie shows the world in dire need of sunlight. The Sun is in such a "low-batt" state that the world sends a second group of space explorers to place a "stellar bomb" on the surface of the sun in order to re-ignite it. However, someone among them who believes that humanity is fated to perish doesn’t want the mission to succeed.

Disturbing details: The Earth in a perpetually frozen state is enough to make you shiver in more ways than one. The film highlights the fact that human beings are the most dangerous elements of all.

Scary line: "Just remember it takes eight minutes for light to travel from sun to Earth, which means you’ll know we succeeded about eight minutes after we deliver the payload. All you have to is look out for a little extra brightness in the sky. So if you wake up one morning and it’s a particularly beautiful day, you’ll know we made it," says Robert Capa (Cillian Murphy), the physicist who heads the mission.

End notes: There’s actually something worse than a dying sun-a killer trapped inside your spacecraft.

Warm up. Climate change may just sneak up on us.

Plot planet: Climatologist Jack Hall (Dennis Quaid) tells the United Nations (UN) that global warming is a clear and present danger. They don’t believe him. Soon after the UN stint, the weather starts to go crazy and everything that could go wrong in the environment goes wrong. The whole world is soon in a deep freeze.

Disturbing details: The rapid progression of global warming is not a pretty sight. It may not be scientifically accurate-but it’s still pretty frightening.

Scary line: "Mankind survived the last ice age. We’re certainly capable of surviving this one. All depends on whether or not we’re able to learn from our mistakes," declares Jack.

End notes: Unlike the film’s protagonists, we still have some time to fight off global warming. We should not forget that the clock is ticking.

Asteroid anxiety. If a giant asteroid is going to crash into the Earth, it’s time to call in Steven Tyler and the rest of Aerosmith to sing a song.

Plot planet: The National Aeronautics and Space Administration (NASA) discovers that an asteroid that’s as big as the state of Texas will crash into the Earth in 18 days. The NASA scientists, along with their colleagues from all over the world, theorize that planting a nuclear bomb at the core of the asteroid will split it in two. Thus, it will miss the Earth. They hire a group of oil drillers, lead by Harry Stamper (Bruce Willis), to do the job.

Scary line: "For god’s sakes think about what you’re doin’. Why are you listening to someone that’s a hundred thousand miles away? We’re here. Nobody down there can help us. So if we don’t get this job done, then everybody’s gone," states Harry.

End notes: You have to suspend your disbelief to in order to get through this one. Of course, it’s got an ending that’s supposed to make everyone happy.

Wet ones. Their problem is getting drinking water.

Plot planet: We see what’s left of the world after the ice caps melted (due to the abuse inflicted on the environment) and a great deluge washed away civilization. The survivors of the lethal flood are now living in floating settlements where everything is regulated. The Mariner (Kevin Costner) is a drifter who hooks up with a little kid named Enola (Tina Majorino) who is said to have a map to Dryland tattooed on her back.

Disturbing details: The lack of water leads people to recycle their urine. The sight of Costner with gills and webbed feet is also unnerving.

Scary line: "Dry land is a myth," says The Mariner.

End notes: You really don’t know what you’ve got until it’s gone. Dirt and drinking water could actually become more precious than diamonds.

Plot planet: This dystopian setting is projected "a few years from now." It came about due to the depletion of the world’s resources and the fight for fuel. Anarchy ensued and soon the world was one lawless territory. The anti-hero of the film is Max Rockatansky (Mel Gibson), a police officer who ends up paying the high price for doing his job.

Disturbing details: A motorcycle gang terrorizes and brutalizes people indiscriminately all in the name of fuel. The body count keeps rising.

Scary line: "It’s that rat circus out there, I’m beginning to enjoy it. Look, any longer out on that road and I’m one of them, a terminal psychotic, except that I’ve got this bronze badge that says that I’m one of the good guys," states Max.

End notes: Gibson can actually use this movie as an excuse for why he’s so messed up right now. Plus, its violence index trumps that of The Passion of the Christ.

Cruel catch. If it’s too good to be true, then you’re probably going to die soon.

Plot planet: In 2116, people live in a "perfect world of total pleasure," where everything their heart desires is fulfilled. You name it, they get it. They’re all living like rock stars. And, indeed, just like rock stars, their fun is over all too soon. This is what the hero Logan (Michael York), who hunts down people who dare to defy the time limit for fun. As it turns out, resources have to be rationed. That’s why people are only allowed to live up to a certain age.

Disturbing details: Those who resist the mandated death sentence are hunted down and killed. They don’t go willingly, so they meet a violent end.

End notes: According to this movie, life cannot possibly begin at 40.

Plot planet: Set in 2022, the Earth is an overpopulated, severely polluted planet with a crazy-hot climate caused by the Greenhouse Effect. The center of the action is New York City, where 40 million people struggle with poverty, unemployment, and depleted resources. The hero is a detective named Robert Thorn (Charlton Heston) who’s tasked to solve a murder that’s more than what it seems.

Disturbing details: Real meat, fruits, and vegetables are rare. People have to be content with food substitutes of dubious origins. One such food substitute is called Soylent Green wafers. However, even the fake food runs out. Of course, this causes riots.

Scary line: "Why, in my day, you could buy meat anywhere! Eggs they had, real butter! Fresh lettuce in the stores," says Sol Roth (Edward G. Robinson), an elderly police researcher.

End notes: Let’s just say Hannibal Lecter would be sort of proud of this movie.