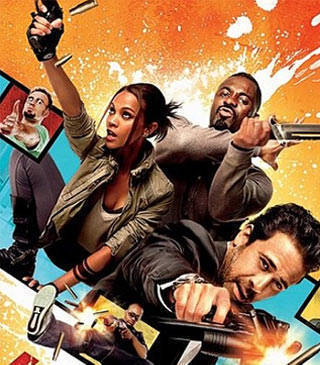 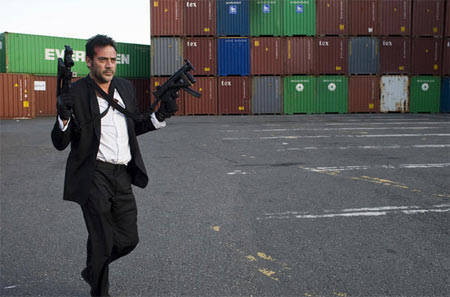 With an intriguing globe-trotting story, a mostly engaging cast, and grade-A production values, "The Losers" is enjoyable but formulaic fun from start to finish. A high-octane action-thriller based on comics published by DC/Vertigo, "The Losers" follows an elite American Special Forces unit which is betrayed by the villainous Max (Jason Patric) and left for dead in Bolivia during a mission which goes tragically wrong. A mysterious woman named Aisha (Zoe Saldana) then shows up, promising the team a chance to get back to the USA and have their revenge on Max. But she makes them promise to turn Max over to her if and when they capture him.

Though the action takes place in Bolivia, New Mexico, Mumbai, Houston, Los Angeles and other cities, most of "The Losers" was filmed in Puerto Rico. As a result, the movie has a grittier, almost Third World look which recalls the visual texture of "Slumdog Millionaire" that's uncommon in a big-budget Hollywood action spectacle. Also unconventional is the gimmick the filmmakers use to identify the cities where all the confrontations and betrayals take place: instead of merely superimposing a title onscreen, they make the name of the city part of scenery in letters big enough to fill a football field. The city of Miami, for example, is introduced with a helicopter shot showing the hundred-foot long letters M-I-A-M-I floating on the waters of a beach.

But that's about the only example of innovation seen in "The Losers," a movie whose other elements are all recycled from other blockbuster movies. The composition itself of the Losers team- an older white guy (Jeffrey Dean Morgan) with four younger guys of various ethnicities (Chris Evans, Idris Elba, Columbus Short, Oscar Jaenada) - immediately recalls the A-Team. And you won't be able to help but compare the two because a movie based on "The A-Team" TV series from the '80s is coming out in a few weeks, and its trailer will surely accompany prints of "The Losers."

As the computer and communications expert Jensen, Chris Evans is the movie's most engaging cast member. But the cute and cocky charm he displays here is just a retread of his Johnny Storm role in the "Fantastic Four" movies. Not helping the general feeling of déjÃÂƒÂ  vu is the fact that Evans' funniest moment in "The Losers" is one which many viewers will have already seen in the film's trailer- the scene where he seemingly fires at security men with bullets from his fingers. 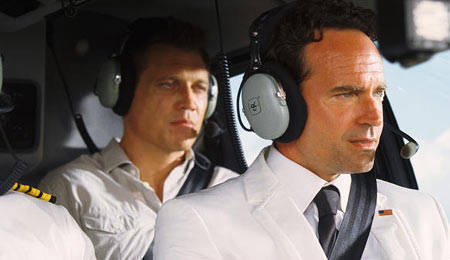 Holt McCallany and Jason Patric in The Losers.

If Evans is the best cast member in "The Losers," then Jason Patric is surely the worst. This is unfortunate since casting perennial good guy Patric as the villain here reveals a desire on the filmmakers' part to be original and to take a daring artistic risk. Patric's attempt to bring a psycho-funny element to his portrayal of main baddie Max was surely inspired by Heath Ledger's Oscar-winning portrayal of the Joker in "The Dark Knight." Sadly, however, what ends up onscreen is a performance that can't even hold a candle to Cesar Romero's version of the Joker in the campy Batman TV series starring Adam West. This early in the year, Patric should already be a frontrunner at the 2011 Golden Raspberry Awards for his amateurish acting in "The Losers." 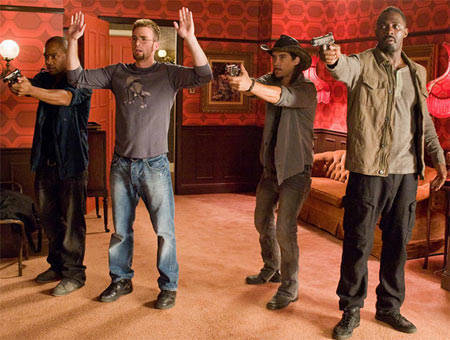 Way more satisfying are the production values, which are as impressive as can be expected from any movie from mega-producer Joel Silver. But like other aspects of the movie, these too suffer for their familiarity. Slow-motion carnage amidst a hail of falling glass a la "The Matrix"? Check. Shootouts zipping between normal speed, slow-motion, fast-motion and freeze frames a la "300"? Check. Large-scale destruction of island-sized chunks of earth a la "2012" and "Indiana Jones IV?" Check. Bold and stunning graphics for the end credits befitting a movie based on a comic book or graphic novel a la "Sin City"?   Check.

If you're the kind of moviegoer who wants to see brilliant strokes of filmmaking originality or elements that go beyond the formulaic for your P150, "The Losers" isn't for you. But if you'll be happy with a fast-paced story, quirky characters, zippy one-liners, and extravagant set pieces involving helicopters, rocket-launchers, giant magnets, Ducati motorcycles, and no-way-out situations, then there's more than enough of those in "The Losers" to keep you satisfied this weekend in a cozy air-conditioned theater.

Movie Review The Losers
Your Guide to Thriving in This Strange New World
Staying
In? What to watch, what to eat, and where to shop from home
OR
Heading
Out? What you need to know to stay safe when heading out