Top 10 Tears for Fears Songs We Want to Hear Live This Sunday
Loading
Already a member? Log in
No account yet? Create Account
Spot.ph is your one-stop urban lifestyle guide to the best of Manila. 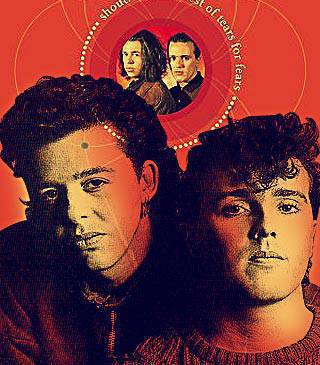 We list 10 Tears for fears songs that we want to hear live at their May 2 concert at the Araneta Coliseum. Let's all go back to the '80s!

Manila's in for a big blast from the past. English duo Tears for Fears (Roland Orzabal and Curt Smith) is set to perform live on May 2, 8 p.m. at the Araneta Coliseum.

Identified as one of the prime movers of New Wave music in the 1980s, the duo is known for their infectious beats, intellectual lyrics, and music videos that play with metaphors. They may have aged, but their sound hasn't.

SPOT.ph lists 10 Tears for Fears hits that we'd like to hear live this Sunday.

1. "Everybody Wants to Rule the World"

Just in time for the last leg of the campaign period, this song, according to Smith, is all about "everybody wanting power, about warfare and the misery it causes." Despite its serious bent, this tune is a joy to listen to, if only for its smart rhymes such as, "I can't stand this indecision married with a lack of vision." No wonder everybody wanted to memorize the lyrics back in 1985.

This song was a slow burn rather than an instant hit. It was released in 1982 but didn't get played often enough until much later. "It's a kind of a love song, though more referring to one's parents than to a girl," Orzabal explained. Tip: The repeated refrain, "You don't give me love," would make a nice ring tone.

The song, released in 1983, asks a profound question: "Where does the end of me become the start of you?" However, Orzabal revealed, "It's not really about much. It's just one of those cheap pop lyrics." Opening with a xylophone melody, this fast-paced tune is perfect for turning up the heat in nostalgia parties.

This is one love song that never became generic. This song, released in 1985, featured a monkey in a library in its video. No reason was given for the presence of the animal. In any case, Orzabal stated that this is a love song "that goes a bit perverse at the end." Arguably, its chorus is one of the most recognizable ones from the 1980s.

This song, released in 1984, may sound like a rock anthem with its kick-ass words, intense guitar riffs, and heavy drums–but it's actually very political. "It concerns protest inasmuch as it encourages people not to do things without actually questioning them. People act without thinking because that's just the way things go in society. So it's a general song, about the way the public accepts any old grief which is thrown at them," explained Smith.

This 1984 tune showcases the duo's sampling skills. The string instruments melody heard at the start of the song is reportedly taken from a Barry Manilow album. However, this song has cerebral roots. Orzabal disclosed: "The song stems from two ideas. One is something that mothers say to their children about pulling faces. They say the child will stay like that when the wind changes. The other idea is inspired by the anti-nuclear cartoon book When The Wind Blows by Raymond Briggs."

Released in 1989, this song is another one of the duo's politically-charged songs. Check out this line: "So without love and a promised land, we're fools to the rules of a government plan." The surreal video also won Best Special Effects and Best Breakthrough Video honors at the MTV Music Awards.

8. "Advice for the Young at Heart"

The duo paid homage to John Lennon in this 1990 tune, which used the murdered Beatle's quote ("Love is a promise, love is a souvenir once given, never forgotten, never let it disappear.") in the lyrics.

Despite its mellow melody, this 1982 song is actually a scathing commentary on the rat race. Do not, under any circumstances, listen to this on a manic Monday morning. The intro lyrics alone are dangerous: "All around me are familiar faces/ Worn out places, worn out faces/ Bright and early for their daily races/ Goin' nowhere, goin' nowhere." It's not exactly what you want to hear when you're rushing to work.

This heartbreaking 1989 ballad also features the vocals of Oleta Adams, who sang "Get Here." Orzabal wrote this song when he was immersed in feminist literature. The black-and-white video tells the story of a woman who has to deal with abusive men–both at home and at work.

With trivia from SongMeanings.Net and SongFacts.com.

Araneta Coliseum Tears For Fears Roland Orzabal Curt Smith Everybody Wants To Rule The World Pale Shelter Head Over Heels Shout Sowing The Seeds Of Love Change Mothers Talk Woman In Chains Advice For The Young At Heart Mad World
Your Guide to Thriving in This Strange New World
Staying
In? What to watch, what to eat, and where to shop from home
OR
Heading
Out? What you need to know to stay safe when heading out