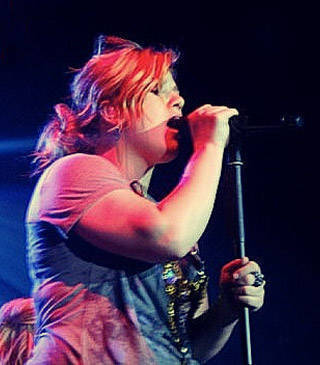 10 Reasons Kelly Clarkson's Concert Was "All We Ever Wanted"

There's really nothing like the original. As the first-ever American Idol winner took the Philippine concert stage by storm on May 1 at the Araneta Coliseum,  pop rock singer-songwriter Kelly Clarkson proved she could very well teach other Idol alumni who have trooped to our shores a lesson or two in performing.

Her "All I Ever Wanted World Tour" show was replete with boundless energy and skillful vocal acrobatics. After a series of concerts in Australia, Malaysia, Singapore, and Indonesia, Clarkson showed no signs of stress and delivered 21 solid numbers including her biggest hits, covers, and even mash-ups of her favorite songs.

Over 4,000 fans sang along with the Idol who has since sold over 20 million records worldwide and amassed two Grammys, four American Music Awards, 12 Billboard Music Awards, and three MTV Video Music Awards along the way. We saw just why:

1. Her vocal abilities are phenomenal. From the moment Clarkson stepped on stage and opened her concert with her album title track "All I Ever Wanted," fans were already given an idea about how spectacular the night was going to be. She immediately went into the next numbers without breaks, singing two of her biggest hits, "Miss Independent" and the Katy Perry-penned hit, "I Do Not Hook Up," hitting high note after high note effortlessly.

2. She has unlimited energy. Dressed simply in rugged jeans and an embellished V-necked top, her look was the anti-thesis of the amount of energy she expelled throughout the entire concert. Taking only very short breaks after each song, the set list pacing was very crisp, keeping the audience excited about what song they'd hear next.

Kelly performs a mash-up of Alanis Morissette's "That I Would Be Good" and Kings of Leon's "Use Somebody."

3. Her mash-ups blended together really well. Glee fans understand perfectly what a mash-up is–a combination of two songs made to sound like one. While some mash-ups sound contrived, Clarkson's two mash-ups gelled together perfectly–the upbeat fusion of her song "If I Can't Have You" and Kylie Minogue's "Can't Get You Out of My Head," and the blending of Alanis Morissette's "That I Would Be Good" and the Kings of Leon's "Use Somebody." The audience screamed in affirmation after Kelly sang a line from the latter mash-up, "That I would be good, even if I gained 10 pounds." Loyal fans know she's has been surrounded by controversies regarding her fluctuating weight.

4. Her covers are very current. As has been drilled into any Idol contestant's head, song covers always have to be current. Who else can be an expert at this than the first Idol? Kelly sang the 2001-released song "Lies" by The Black Keys, an American blues and rock music duo, and the 2003 hit "Seven Nation Army" by The White Stripes.

Kelly performs an acoustic medley of her fans' most requested songs.

5. She tailors her set list to the country she's performing in. Breaking into an acoustic medley of her older songs, Clarkson said they personalized this set for the Philippines. "These next songs are ones you guys requested through Twitter. Now I can't sing them all, because I'm just human." She proceeded with a medley of "Just Missed The Train", "Low", "Addicted" and "Gone."

6. She's very interactive. A couple of times during the concert, Clarkson asked the audience to participate, asking people to sing a couple of lines from "Breakaway". In her performance of "I Want You," which she described as her "happy song," she divided the audience into two groups: left and right. At one point, she noticed how those in front were pushing each other just to get to her, she paused and said, "Don't hurt each other, I'm not Jesus so it's not worth it." 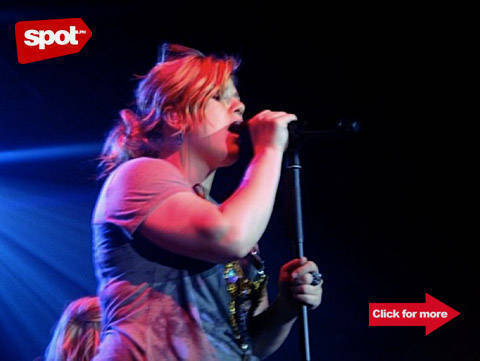 7. She fights for her artistry. Before she sang "Because of You," she shared just how she had to fight for this song. "This is my biggest hit worldwide, considering how I had to fight for this song to be on Breakaway." This moment was reminiscent of the controversy surrounding her 2007 album My December, which her label managers were reportedly dissatisfied with due to its "darkness." Rumors say she refused a $10 million deal with her label to remove four songs in the album.

8. She kept it casual and made it all about the music. Symbolically performing barefoot, Kelly's concert was rid of all gimmicks. There were no set changes, and the   lights were the only set design. But because of her dexterity, she carried the audience's energy through until the end. The concert reached its peak when she sang the Kara Dioguardi song, "Walk Away" and her final song, "Since U Been Gone." The audience was left wanting more, as they screamed "More, more, more!" and "Kelly, Kelly, Kelly!"

Kelly congratulates the newly engaged couple after her performance of "My Life Would Suck Without You."

9. She's a crowd pleaser. But Clarkson wouldn't leave her fans hanging juat like that, and went returned onstage singing "Already Gone," the supposed rip-off from Beyonce's "Halo." And what would the All I Ever Wanted World Tour be without the first single of this album? She ended the concert with the song that had the audience jumping on their feet: "My Life Would Suck Without You." A guy in the audience even proposed to his girlfriend as Clarkson sang this last song. Images of the hopefully would-be fiancée appeared, as these words appeared [on the big screen]: "Will you marry me? All my love - Vernon."

10. She sounds as good live, sometimes even better than in her recordings. Her sometimes raspy vocals provides that extra charm as she hit those high notes perfectly. It was a pumped-up hour and a half, as the energy was spread out through the entire concert. Our lives would suck without her, clearly. Easily not just the best Idol alumni concert of the year, but of all time.

Concert Review Manila Kelly Clarkson All I Ever Wanted World Tour
Your Guide to Thriving in This Strange New World
Staying
In? What to watch, what to eat, and where to shop from home
OR
Heading
Out? What you need to know to stay safe when heading out