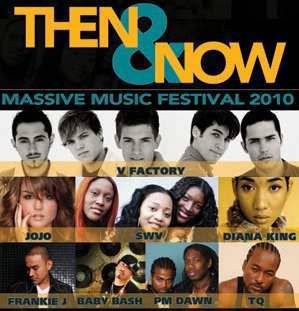 VIDEOS: No Generation Gap at the Then and Now Musicfest

Missed this concert? Watch Manila relive the '90s with Diana King, All 4 One, Jojo and other hiphop, RnB and pop artists.

At last weekend's Then and Now Massive Music Festival, touted to be this year's biggest gathering of international artists,  RnB, hip-hop, and pop hitmakers gathered at the SM Mall of Asia concert grounds and bridged the gap between a few generations:

Artists who were at the peak of their careers in the '90s gave the Filipino audience a trip down memory lane as they performed their chart-topping tunes.   Diana King belted out "Shy Guy" and SWV sang "Weak."   Young members from the audience who were probably not even born when such songs came out were definitely not neglected as the more recent artists fulfilled the young ones' ear and eye candy cravings.   Pretty soon, the crowd became a melting pot of music lovers.   Those shouts of kilig when members of boy band V Factory admitted they have a thing for Filipinas came from the teenagers… right?

2.   People who came of age in the '90s mingled with the Hannah Montana crowd.

Even the audience was a mix of "then" and "now."   The venue was packed with pre-teen girls donning clothes and accessories Miley Cyrus would wear, yuppies making the most of their mid-month pay, and couples in their thirties and forties who appeared to be celebrating their anniversaries.   Oddly enough, the couples of a certain age were more participative, especially when TQ asked the audience to "bounce" with him.

3.   The audience enjoyed old hits that were amped up by fresh renditions.

Following the trend of hit shows such as American Idol and Glee, the artists filled their set list with songs they gave a new vibe. A party feel to "Say a Little Prayer" by Diana King, anyone? How about a version of Spice Girls' "2 Become 1" by our very own Myrus Ramirez, who opened the show?

4. The audience were given a "listen-all-you-can" treat–what with nine international artists all in one venue.

For concerts staged in the Philippines, two or three international artists performing in one show's already plenty.   Then and Now had nine: SWV, PM Dawn, Diana King, TQ, Baby Bash, Frankie J, V-Factory, JoJo, and All-4-One. Will this start the trend of more international artists featured in just one show? We hope so. The only drawback in such a scenario is that almost all artists brought their own equipment and the set-up and sound check took too much time (Read: 10 to 15 minutes!) At one point, because the people were getting restless, the management decided to play some Robbie Williams songs and the audience even sang along. (I guess you could say there was a tenth artist there that evening.)

Jojo sang her new single, "Let's Get This Twice."

5.   The performers served up "You heard it here first" tunes.

"I haven't performed this song before," Frankie J told the Then and Now crowd. "And you're going to hear it first here, live in Manila."   Frankie J playing "Crush" for the first time ever indeed made the Filipino crowd feel special.   Jojo also played her new song "Let's Get This Twice."   "Tell me what you think about it," she told the audience before sang the song.

6.   Despite sound system issues, the performers didn't miss a beat.

There was also a considerable and noticeable difference among equipments used during the show. Sure the speakers were stacked and suspended in the air, making the music sound really "buo" for an open-air venue.   However, the microphones were not at par with the other sound equipments because at times, they were turned off even if the artists have started singing. This did not happen just once nor twice but thrice. When PM Dawn went on stage for some pre-singing kamustahan with the audience, the people answered back with "We can't hear ya, dawg!"   The same thing happened to Diana King whose powerful, initial belts became whispers to the large crowd.   Then, when Jojo started on "Leave," the volume of her microphone wasn't well-adjusted.   She even had to instruct the people backstage in the middle of the song.

Baby Bash performed "Doing Too Much."

We Filipinos take pride in our food. In fact, a staple question of journalists to international artists who are half-Filipinos is "What's your favorite Filipino food?" Vanessa Hudgens says they're pancit, adobo and halo-halo.   Jennifer Lopez, whose ex-hubby Cris Judd was half-Filipino, confessed being a fan of fresh lumpia.   But, unlike Hudgens and Lopez who replied to the queries of entertainment reporters, it was pretty cool to hear Baby Bash raving about sinigang.   "I like pork sinigang the best," he said as he rubbed his stomach, before performing "Baby I'm Back."

8.   PM Dawn's JC presented roses to   the women in the audience and paid homage to the late Francis Magalona.

What does the University of the Philippines' naked runners have in common with PM Dawn's JC? Answer: They give out free roses. While singing "I'd Die Without You," he went down from the stage, walked the aisle and gave out roses to around a dozen lucky female audience members. The younger member of PM Dawn was also kind enough to explain that his brother, Prince Be, was sick back home and made the crowd chant "Get Well, Prince Be." He also dedicated his last song, "Set Adrift on Memory Bliss," to "the guru, Francis M."

Jojo performed "How to Touch a Girl."

9.   Jojo gushed over the Philippines and contemplated moving.

"I love this country so much," said Jojo. "I think I'm going to move here."   At that, there were shouts of love from the audience, especially from the teenage girls and boys.   Jojo said that she performed with Justin Timberlake the last time she was in the Philippines and that's when she fell in love with the Filipino crowd.   "I kept thinking 'I want to go back there' and now I'm here!" she told the crowd.

Whether her lipat-bahay dreams succeeds or not, she seriously knows "how to touch" the Filipino people.

All 4 One performed "I Swear."

Every artist in the Then and Now line-up went all out with their performances.   Clearly,   they relished sharing their tunes.   "Music speaks for itself," said Frankie J after performing his rendition of "More Than Words."   "Music makes the world go 'round. D'you agree?" he asked.   (Yes, we do.)

Jojo Diana King Frankie J. Then And Now Concert Concert Review All 4 One Swv Pm Dawn Baby Bash Tq V Factory
Your Guide to Thriving in This Strange New World
Staying
In? What to watch, what to eat, and where to shop from home
OR
Heading
Out? What you need to know to stay safe when heading out