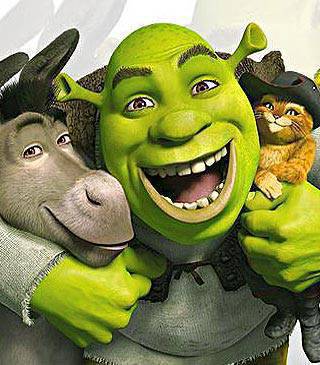 Shrek 4, also known as Shrek Forever After and Shrek The Final Chapter, is supposedly the last in the beloved fairy tale spoofing series which began in 2001. Aside from being a worldwide hit and the first film to win the new best animated feature Oscar, Shrek also begat Shrek 2, one of those rare sequels which many considered to be even better than the first. But considering how forgettable Shrek The Third was (it was the one where Justin Timberlake was the voice of the boy who would become King Arthur), news that there would be a fourth installment may not have triggered ripples of excitement in fans. After seeing Shrek Forever After, however, you will probably be thankful that the beloved ogre was given a fitting send-off, because while Shrek 4 isn't nearly as good as the first two Shreks, it's certainly superior to Shrek 3.

Similar to last year's successful Star Trek reboot, the plot of "Shrek Forever After" gives its creators a chance to start with a semi-clean slate by using the "alternate universe" device. Shrek (voiced again by Mike Myers), now a domesticated daddy of three, misses his carefree bachelor days, when he was feared and hated, when he was treated like, well, an ogre. When Rumpelstiltskin (Walt Dohrn) promises him one such good old day if he'll just sign a contract, Shrek agrees, realizing too late that he should have read the fine print. He wakes up in a world where Rumpelstiltskin is king and ogres are hunted. None of his friends, including Donkey (Eddie Murphy), Puss (Antonio Banderas) know who he is. Worst of all, not even wife Fiona (Cameron Diaz) knows him or believes that he is her one true love. Shrek now has exactly one day to make Fiona fall in love with him, or he is doomed to live in this depressing world forever.

"Depressing" is not a word one normally associates with a Shrek movie, but it describes this third sequel very well and is the quality that sets it apart from the first three films. Where the first two Shrek movies were laugh-a-minute spoofs that lampooned Disney cartoon clichés and used modern pop culture touchstones in a 14th century setting, you would be hard-pressed to find five gags in all of Shrek 4 that are knee-slapping funny. Indeed, the only truly original joke in Forever After involves an ogre obsessed with chimichangas. Other gags, like the irresistible, pitiful look which Puss uses to get his way is rehashed from the earlier movies. What fills most of the running time of Shrek Forever After are dialogue exchanges where Shrek tries to prove to the others that he knows them, and scenes where he reflects on the life and love he may have lost forever as a result of his deal with Rumpelstiltskin.

The movie will also disappoint those who are looking forward to seeing new fairy tale characters in a new light. Making their debuts here are Rumpelstiltskin, the witches from the Wizard of Oz, and the Pied Piper. Sadly, the movie doesn't give any of these storybook icons any surprising new facets, the way that earlier Shreks showed us inventive new sides to the Frog Prince, Prince Charming, Merlin, and the Fairy Godmother.

What Shrek Forever After does give its viewers after a long wait is a beautiful, touching ending that sends Shrek, Fiona and the other characters off into a hopeful storybook sunrise. Its poignant, mature message about people only realizing how good their lives are when they're in danger of losing everything may be lost on child viewers, but it's what makes this Shrek chapter a fitting finale to a movie series which millions all over the world have enjoyed growing up with for the last nine years. With this ending, Shrek and his friends now deserve to be missed.

Shrek Forever After Shrek
Your Guide to Thriving in This Strange New World
Staying
In? What to watch, what to eat, and where to shop from home
OR
Heading
Out? What you need to know to stay safe when heading out