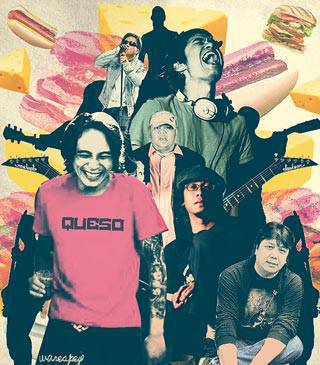 The Yummiest Music in Town: 20 Pinoy Bands Named After Food

Care for a Hotdog Sandwich topped with Cheese, Mayonnaise, and Blue Ketchup?

Since countless bands already exist, baptizing a new band is one of the most frustrating things musicians must go through. Aside from numbers, tweaked spellings and seemingly mundane objects, Pinoy musicians have explored another area: food. Naming bands after food and drinks might just be coincidental but you’d still be surprised at how many Pinoy bands sound tasty:

Taste this: Hotdog was the Manila sound of the ’70s, according to OPM.org.ph.

The band versus the food: The band was as addictive as hotdog in its heyday but definitely more filling.

Taste this: They chose the name "Sandwich" because "it was something that looked good on a T-shirt and kick drum," bassist Myrene Academia told amp.ChannelV.com.   Vocalist Raimund Marasigan added, "The logo came first so obviously Diego (Castillo) and I wanted a band that started with the letter ’S’ that would also look good on a t shirt and band (merchandise). He’s a marketing grad.   The name came before the band."

The band versus the food: With their evolving rock music and electric shows, Sandwich hits the spot.

Taste this: The band started out in 1994 as "Cheese" but changed their name to "Queso" in 2003 "because that is what the kids were calling them and it was only logical," according to amp.ChannelV.com.

The band versus the food: Far from cheesy, Queso plays commercially and critically acclaimed hard rock.

Taste this: Chicosci was formerly called Chico Science Project, according to Inquirer.net.   Music sites like Kumanta.com reveal that the punk-rock band changed its name to Chicosci to "avoid confusion and potential legal issues with Brazilian artist [Chico Science]."

The band versus the food: Unlike the chico fruit, Chicosci doesn’t bruise easily as proven by their multiple awards, tours abroad, and decade-old existence.

Taste this: Bassist Jal Taguibao’s mom, a diabetic, named the band "Sugarfree," according to WeAreSugarfree.com

The band versus the food: With four studio albums and countless concerts, the 10-year-old band is far from bland.

Taste this: Frontman Monty Macalinao named the band after his favorite song from the Smashing Pumpkins’ album Siamese Dream, "Mayonnaise," according to PhilMusic.com. He added that the food reference was coincidental but said being the opening act for a Sandwich and Cheese concert is a nice concept.

Bestsellers: "The Only Thing," "Eddie Lang," "Jopay" "Sinungaling" and "Panaginip," among others.

The band versus the food: The 2004 Red Horse Musiklaban champion’s pop-punk music is like mayo-creamy with a kick.

Taste this: Named after the lead singer Mocha Uson, the sexy girl group disbanded in April after every body but Uson left the group to form a new one. However, Uson tapped two new women to form the new Mocha Girls trio in May, according to PEP.ph.

Bestsellers: "Deliciosa," "Take A Sip" and "Falling For You."

The band versus the food: Mocha can tickle your taste buds but it’s definitely not for kids.

The band versus the food: Like a kitchen with no salt, OPM (Original Pinoy Music) would not be complete without folk-rock band Asin who championed the environment, peace and other causes.

Taste this: Singers and stand-up comedians, The Porkchop Duo is composed of Renato "Porky" Gomez and Romeo "Choppy" Vargas.

The band versus the food: They’re not as hefty as you’d imagine a duo with a name like that but their spiels are packed with Old School jokes and songs that are sure to bring out a belly laugh or two.

Taste this: Skabeche adds a Pinoy touch to the Jamaican ska genre. It also "alludes to the humble adaptation of the sweet and sour fish dish escabeche," according to their official site.

The band versus the food: The 10-strong band makes beats as flavorful as the escabeche by mixing punk, blues, jazz and classical music.

Taste this: The band name came to them a few minutes before the start of Cultural Center of the Philippines’ Gawad Para Sa Alternatibong Pelikula at Video where they were to be introduced onstage in the ’90s, according to OnePhil.com. Asked what inspired the name, vocalist and SPOT.ph blogger Lourd de Veyra told OnePhil.com, "Ewan ko nga eh."

The band versus the food: Like sago’t gulaman that provides sweet respite from the heat, Radioactive Sago Project or RASP in short is a breath of fresh, spoken-word-jazz-rock air.

Bestsellers: "Sama Na," "Andar" and "Uhaw," among others.

The band versus the food: Chillitees’ soulful jazz-like heats up slowly but surely.

Taste this: Giniling Festival is also called "Giniling" and "Gin Fest" by their fans.

The band versus the food: Giniling Festival has that Pinoy flavor but leaves a stronger aftertaste with all their jumping, cursing and rocking out. Perhaps the band has more in common with their shortened name?

Taste this: Known for soulful and ethereal music, Sugar Hiccup derived its name from a song by the alternative Cocteau Twins, according to their official website.

The band versus the food: Sweet and easy on the ears, Sugar Hiccup is as addictive as the sinful granules.

Taste this: Originally called Sponge after R.S. Surtee’s Mr. Sponge Sporting Tour, the pop-rock band changed its name to Sponge Cola after learning a Detroit-based band beat them to the name.

The band versus the drink: Like the carbonated drink, Sponge Cola has the fun fizz factor going for it.

Taste this: The band’s name was inspired by guitarist Jollo Cacnio’s story about a girl who’d "squeeze her lips and cheeks as if she were modeling in a dalandan soda commercial," according to ph.88db.com.

The band versus the food: The eight-strong Dalandan Soda gives a twist with their alternative-ska-rock music, as vocalist Guiller Realin told ph.88db.com.

Taste this: Blue Ketchup is under Soupstar Entertainment Inc., which also handles two other "food bands" in this list, Sandwich and Protein Shake.

Bestsellers: "Angel’s Smile," "Bro" and "Mountain Bike," among others.

The band versus the food: With melodies cool as the color blue, Blue Ketchup adds flavor to the local music industry with its mix of pop and bossa nova.

Bestsellers: "Malas Mo," "Ganyan," and "Pacman," among others.

The band versus the food: Protein Shake packs a punch with "’70s classic rock influenced music," as described by FHM.com.ph.

Taste this: Coffee Break Island played for expatriates and locals in a two-month stint in China in 2005, reports PEP.ph.

Bestsellers: "Sweet Lovin," "Party Song" and "Pakikinggan," among others.

The band versus the food: Coffeebreak Island jumpstarts your blood with their own mix of reggae, ska, soul, and rock.

Chew on this: The name Orange and Lemons was recommended by a former member of the band.

Bestsellers: "Hanggang Kailan," "Just like a Splendid Love Song," "Abot Kamay" and "Pinoy Ako," among others.

The band versus the food: Their retro-pop sound was fresh and catchy but things later turned sour. After about two years, Orange and Lemons disbanded due to "individual and musical differences."

SPOT.ph wants to know: Do you know other bands named after food?