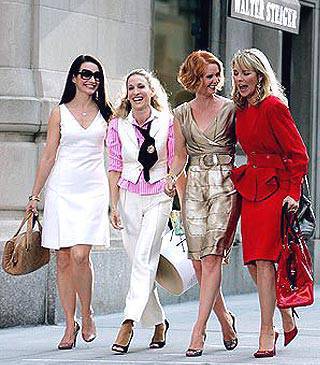 10 Best Sex and the City Episodes

Let's bring sexy back to the city! We list our 10 favorite Sex and the City episodes.

The sexy and saucy quartet of Carrie Bradshaw, Samantha Jones, Miranda Hobbes, and Charlotte York are back with Sex and the City 2, the much-hyped sequel to their 2008 big-screen hit.   Before we get lost anew in the parade of haute couture and self-indulgence, SPOT.ph takes a look back at the series' six seasons and list down our favorites:

Hot plot: Carrie's new writer-boyfriend, Jack Berger, meets Miranda, Samantha, and Charlotte. They all fall in love with him in Episode 4 of Season 6. He enlightens the women about a guy's inner attraction psyche: "I'm not gonna sugarcoat it for you. When a guy's into you, we're coming upstairs, we're booking the next date. There are no mixed signals." Amidst Miranda and Carrie's analysis of the former's date, Berger butts in with: "He's just not that into you."

Meat source: Ron Livingston (Jack Berger) as the cute, sensitive and funny writer hits the spot when he shares the heartbreaking truth women should know about guys: there are really no mixed signals.

Hot plot: Carrie's high school sweetheart, Jeremy (David Duchovny), reappears in Carrie's life (Season 6, Episode 10) and she is surprised that they still have chemistry. Carrie writes:"Since high school, most women I know have acquired much better tastes in hairstyle, clothes and food. But what about in men? Maybe we were better off when we thought less and kissed more? When it comes to matters of the heart, did we have it better in high school?" But then Jeremy reveals that he is checking himself in a mental institution. Carrie realizes that their breakup may just be the most sane breakups of all.

Meat source: If all high school sweethearts aged as well as David Duchovny, we'd gladly take up with them again, too.

Jon Bon Jovi is the irresistible bad guy in Season 2.

Hot Plot: Carrie meets Seth (Jon Bon Jovi), a photographer, at her therapist's waiting room. Things get hot and heavy and Seth confesses to Carrie that he is in therapy because he loses interest in women after sleeping with them (Season 2, Episode 13).

Meat source: Sexy rockstar Jon Bon Jovi can still play the bad boy women are drawn to, the one we know is totally wrong for us but one we can't resist.

Hot Plot: In Season 6, Episode 14, Carrie admits not being used to Aleksandr Petrovsky's (Mikhail Baryshnikov) grand romantic gestures–with poetry readings and music compositions–and tells him that he has to take the romance down a notch.

Meat source: Petrovsky may not be every girl's dreamboat, but he sure knows how sweep a woman off her feet. He's also rich, successful, and is a passionate artist. Too bad he's dictatorial.

Samantha thinks she's met the man of her dreams.

Hot plot: In this Season 2 (Episode 18) installment, Samantha hooks up with a guy who turns out to be too much to handle. At first, she thinks she's hit the jackpot. But it later proves physically impossible to be "more than just friends" with a man she dubs as Mr. Cocky.

Meat source: Mr. Cocky (John Enos) is a sight to behold–and we don't even get to see everything.

The lusty Miss Jones learns how to love her neighbor.

Hot plot: The debut episode of the sixth season had Samantha going nuts over her gorgeous new neighbor Chip Kilkenny (Victor Webster). She hits on him at first sight and loses no time in welcoming him in a "non-traditional" way. Alas, their neighborly activities are interrupted when he gets arrested for insider trading.

Meat source: The criminally inclined Mr. Kilkenny is more than just easy on the eyes. He's all you ever want to look at.

Hot plot: In Season 4 (Episode 11), Miranda's man, Steve Brady (David Eigenberg), gets one of his balls removed due to testicular cancer. To show her support, Miranda somehow ends up sleeping with him. This would prove to be the turning point of their relationship, as she gets pregnant from the "mercy encounter."

Meat source: Steve is a nice guy who's clearly sincere about his feelings for Miranda. He may not be the alpha male that Miranda may have wished for, but he clearly loves her a lot.

Charlotte finally allows herself to go crazy–if only for one night.

Hot plot: The foursome go to Staten Island to attend an event benefiting firefighters. Charlotte lets her hair down, gets drunk, and announces to the world that she's going to find her Prince Charming. "I'm nice and pretty and I'm smart. I'm a catch!" she exclaims.

Meat source: A bunch of beefy firefighters, one of whom Samantha goes home with.

Hot plot: The foursome experience some tension with each other in this Season 3 (Episode 16) installment. Charlotte, in particular, says she's offended by Samantha's vulgar words. However, when she speaks her mind during lunch with her sorority sisters, they chide her for being like…Samantha.

In a fairy-tale twist, Mr. Big finds Carrie in Paris.

Hot Plot: Carrie's big move to Paris to be with Aleksandr Petrovsky is turning out to be a big mess. She misses her friends and with too much time on her hands, she wanders the streets of Paris and can't keep her thoughts from returning to Big. There's a fairy-tale finale: Big goes to Paris and tells her, "It took me a really long time to get here. But I'm here. Carrie…you're the one." This is also the episode where Carrie Bradshaw dishes out one of the most memorable lines from the series: "I'm looking for love. Real love. Ridiculous, inconvenient, consuming, can't-live-without-each-other love."

Meat source: Confident Mr. Big (Chris Noth), with expressive eyes and a disarming smile, always finds his way back to Carrie's life. If our version of The One looked like him, we wouldn't mind going through a million heartbreaks, right?

SPOT.ph wants to know: What's your favorite Sex and the City episode?