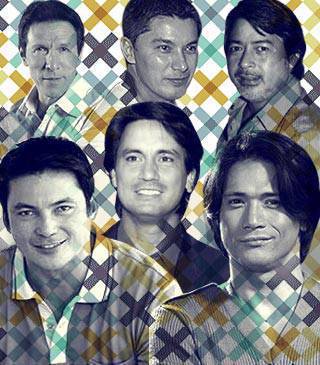 The hottest celebrity dads aged 40 and up that we’d like to...f..awn over.

Father’s Day is upon us, and just as there are MILFs, SPOT.ph lists our favorite Pinoy DILFs. (We don’t need to spell out the meaning of that lusty acronym, do we?) Check out our list of celebrity dads aged 40 and up who have maintained or even amped up their appeal. Sure, we love typical dads of the cute potbellied kind making adorably outdated style statements-"but, oh, we don’t really complain when we see fathers who can still give young stallions a run for their money.

Peak season: Born to race car driver Eddie Gomez and 1970s bomba star Stella Suarez, he broke into showbiz via a Close-Up commercial. This former McDonald’s waiter then went on to star in popcorn movies like Super Islaw (1986) at first. He moved on to more substantial cinema fare like Wakwak: Isang Araw walang Diyos (1989) and Hihintayin Kita sa Langit (1991). Ultimately, he became a sought after endorser and leading man who ventured into sports and directing.

Eye candy factor: His intense deep-set eyes of his can twinkle in one moment, undress you the next. He’s 44 and he still makes a lot of women swoon. He’s still the epitome of "tall, dark, and handsome."

Fan base: Working women who want to make a name for themselves adore him for letting his wife Lucy shine in her own career. She even took over running for Congress when he got disqualified.

Peak season: When he was in his teens, he and Snooky Serna were packaged as a love team. Then, he eloped with wife Amalia Fuentes’ unica hija Liezl. They stayed in the US for a spell and he worked as a gas attendant at one time, much to the shock and delight of some Pinoys. He went back in the early 90s to the Philippines to effortlessly shook off his good boy image by taking on roles like Eric Quizon’s lover in Pusong Mamon (1998) and Joyce Jimenez’s seducer in Scorpio Nights 2 (1999). He wasn’t even afraid to get on the role that will have scenes of him hurting and sexually assaulting Nora Aunor in Sidhi (1999) or bare more of his skin in Ekis (1999). His choices have led him to be a favorite for lead or character roles in TV’s hottest teleseryes even to this day.

Eye candy factor: His been-there-done-that vibe has enhanced his mestizo yumminess. At 47, he’s still every inch a hunk.

Fan base: His fans loved him even more when his wife Liezl’s cancer ordeal made the news. The romantics all hailed him for his unwavering love for his wife and devotion to his children.

Peak season: He starred in Machete (1990), a horrible flesh flick. Luckily, he was given the chance to flex his acting muscles in Jose Rizal (1998). He ran for senator in 2007 and as governor of Bohol in the recent 2010 elections. Though he lost, he always has showbiz to go back to. Aside from acting and politics, he also made his mark as a TV game show host in the Philippine edition of The Singing Bee.

Eye candy factor: He turns 48 this August but he can still pass for a thirty-something. The impish spark in his eyes, his fabulous features, and his lean body are ageless.

Fan base: If you like earthy-yet-intellectual men, then you’re bound to be his fan.

Peak season: He made a mark in Peque Gallaga’s Oro, Plata, Mata (1982). He also wowed critics when he played Jose Rizal in Bayaning Third World (2000). Since then, he’s made a killing as a sought-after character actor.

Eye candy factor: He was cute when he was young (he even had abs) but he is much cuter now with his salt-and-pepper beard and huggable body. He’ll turn 49 this month but he’s still yummier than the bestsellers at JT’s Manukan and Grille.

Fan base: He was, is, and forever will be the thinking woman’s leading man.

Peak season: You can’t discuss him without bringing up Sharon Cuneta. The foundation of Gabbymania was established when the two were a love team in the 1980s. Unfortunately, their real-life love life wasn’t as rosy as their reel ones. Then, in 1994, he got embroiled in the Manila Film Festival Scandal. He left for the States shortly thereafter. But now, as they say, he is back in Philippine showbiz with a vengeance. His recent appearance on The Sharon Cuneta Show with daughter KC was the subject of a whole lot of buzz.

Eye candy factor: He’s going to be 46 this year but his naturally red lips and mestizo charms still distract a lot of women.

Fan base: Sharonians. No matter how much people try to dislodge Sharon Cuneta from being associated with him, they can’t. The two are like pan de sal and coffee. You can enjoy them separately, but they taste better together.

Peak season: He was unforgettable as the object of Carmi Martin’s affections in the original Working Girls. He counts two of the country’s premier actresses as his ex-wives: Vilma Santos (Star for All Seasons) and Marical Soriano (Diamond Star). Though that feat alone already makes him a legend, he also distinguished himself as a talk and game show host (The Weakest Link and Game Ka Na Ba?). He went on to serve as the head of the Optical Media Board. He ran for vice president in the recent in elections but lost.

Eye candy factor: A former model, this tall Ilonggo walks with a sexy swagger. It’s hard to believe that he’s 54. After all, this is the man who popularized the Papaya Dance.

Fan base: If you like your men sophisticated and polished, then he’s the perfect candidate.

Peak season: Though he started out as the lead singer of VST & Company, his popularity soared when he and brother Tito hooked up with fellow comedian Joey de Leon. They ruled-"and continue to rule-"noontime TV with Eat Bulaga. In any case the success of his solo ventures such as Okay Ka, Fairy Ko-"along with other sitcoms and movies-"ensure him of his personal bankability.

Eye candy factor: This 56-year-old may not have matinee idol looks, but he always looks so darn spiffy-"even when he’s wearing nondescript shirts. He has a prominent chin-"but he’s managed to make it look attractive. And, let’s face it, Pia Guanio who is a smart sophisticated young woman, standing firmly next to him all these years makes him even sexier.

Fan base: Everybody. He is the only "Bossing ng Bayan." Men want to be his friend, women want to be with him, and children laugh at his antics. If you consider humor an aphrodisiac, he’s your guy.

Peak season: Coming from the (mostly) macho Padilla clan, Robin started out as a bit player. Then, Anak ni Baby Ama (1990) fired off his meteoric rise the Bad Boy of Philippine Movies. He attracted more female fans when he starred opposite Sharon Cuneta in Maging Sino Ka Man (1991). His run-in with the law slowed him down a bit-"but he was able to recover. Now, a convert to Islam, he is a sought-after endorser, leading man, and, now, a TV host.

Eye candy factor: Long hair, short hair, even bald at one point. Tattooed or clean. It doesn’t matter. He’s yummy! And although we all know he can be that bad boy, people always immediately say that he is not bastos. Can you believe he’s turning 43 in November?

Fan base: Ladies love reformed bad boys. His steadfast beliefs, his commitment to be better, his work ethics, and his advocacy for better Muslim-Christian relations makes him even sexier.

Peak season: He’s not a celebrity but he has the ability to steal scenes. A favorite of indie filmmakers, he is one of the most talented-"albeit underrated-"actors in Philippine showbiz. He gained a mainstream following when he played the villain Hagorn in Encantadia.

Eye candy factor: He has the demeanor of a learned professor-"but his sharp gaze belies a wild side. He may have a shock of white hair, but his body looks better than most thirty-somethings’. The man is still lean and sexy at 59.

Fan base: Even younger women confess that they find him hot. It must be the just-right mix of intelligence and swagger.

Peak season: He was a popular basketball player in the 1970s, playing for YCO Painters in the Manila Industrial and Commercial Athletic Association. He later became a coach. He moved on to being an actor, a congressman, and then a senator. He’s now the resident eye candy of GMA-7’s Pepito Manaloto.

Eye candy factor: Have you seen him lately? The man still has the body of a young Greek god. It’s unfair! When he wears a barong, he looks so damn perfect for it that it makes the most of the male population look like they need to be buried when they wear their barong.

Fan base: Ladies who are into athletics, basketball lovers, and girls with Daddy issues. He’s turning 68 this year and he can still make females giddy.

SPOT.ph wants to know: Who’s the hottest over 40 Pinoy celebrity Daddy for you?