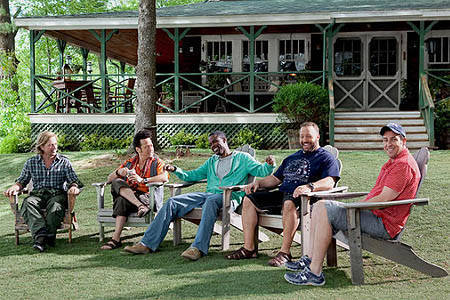 Grown Ups is a typical Adam Sandler movie. On the surface, it seems to be nothing more than a shallow, sophomoric comedy with slapstick gags and verbal putdowns. Underneath its crude exterior, however, is a warm drama about the importance of friendship and family, and the thin line that separates a good parent from a bad one.

When their beloved basketball coach dies 30 years after they won a high school championship, the team’s five members--Lenny (Adam Sandler), Rob (Rob Schneider), Eric (Kevin James), Kurt (Chris Rock), and  Marcus (David Spade)--reunite in a lake house in New England during the Fourth of July weekend to attend his funeral and scatter his ashes. The event prompts the boys, four of whom are now married with children, to re-examine their lives, and to see how much they’ve changed or remained the same since their teenage years. Complicating the reunion is the appearance of the basketball team they defeated in 1978, whose players are demanding a rematch more than three decades later. What was to have been a simple get together becomes a fun and funny adventure, one that challenges them to reassess their priorities and act more like grown ups.

If you watch movies regularly and have already seen the trailer of Grown Ups, don’t expect too many new gags in the movie. The best ones are all in the trailer, including the icky sight of Schneider kissing his wife, a woman who looks old enough to be his mother (Joyce Van Patten); the four year-old son of Kevin James’ character who still breastfeeds from his mom (Maria Bello); and the wives’ encounter with a good-looking muscleman with a squeaky voice. Be warned though, that a few scenes have been shortened or deleted to give the movie a broader rating from the MTRCB. As a result, we don’t see Schneider passionately snogging his much older wife, or a more graphic depiction of the four year-old sucking on his mother’s mammary glands. 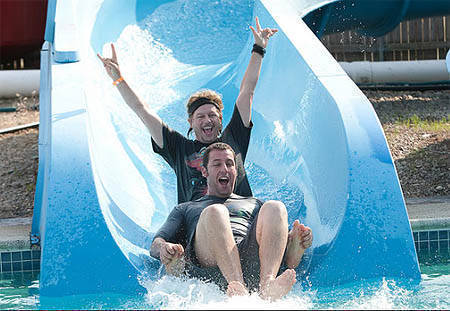 The gags and situations not hinted at in the trailer but which are still good for a few guffaws include a surgically-enhanced dog who sounds like a turkey when it barks, the slapstick that ensues when Sandler and the boys shoot an arrow into the sky and run away in fear as it comes down, and the surprise appearance of three of Rob’s daughters from previous marriages. The comedy from this comes from two of them being sexy enough to be FHM cover girls, while the third one, disturbingly enough, looks like a teenaged, female Rob Schneider.

Predictably, the presence of the two sexy daughters triggers the frat boy ogling that’s also a staple in the typical Adam Sandler comedy, and also gives David Spade’s character, Marcus, something to do in the plot. As the only member of the group who has remained single, Marcus is suspected by Rob’s daughters of being gay. But something happens which makes Rob think that Marcus has had a one night stand with one of his girls, precipitating a squabble among the friends.

Not faring as well as the others in terms of exposure in the film is Chris Rock, who’s not given anything memorable to say or do. Of course, the movie’s most fleshed out storyline is Sandler’s, since he’s not only the star of the movie, but also its scriptwriter and producer. Following Sandler’s story arc in terms of dramatic weight and substance are those of Schneider and Kevin James, who both worry that they’re not being good dads to their kids.

As middle-aged men are wont to do at high school reunions, these best buddies argue about girls, insult each other and lie about how successful they are, precipitating misunderstandings and sowing hurt feelings. By the movie’s end, though, all is right with the world, with most of the characters learning vital lessons befitting the adults they have become: Lenny and his wife (Salma Hayek) learn the importance of not spoiling their children, Rob learns the value of trust; and Eric learns the importance of honesty.

Such life lessons are nothing new in the typical Adam Sandler comedy. What’s ingenious about Grown Ups, though, is the fact that Sandler can serve up such vital life lessons in the middle of fratboy situations and gross-out humor. To reverse the expression, Grown Ups is like a sheep dressed in wolf’s clothing. Ironically, though the movie encourages parents to spend quality time with their kids, taking very young children to see this flick is something no responsible parent should do. This one’s strictly for Grown Ups.