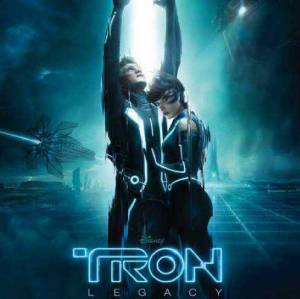 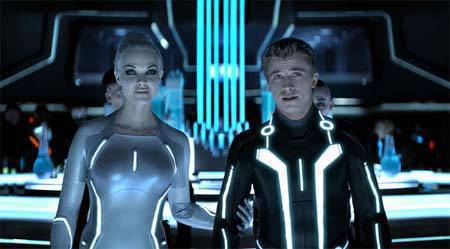 Experiencing TRON: Legacy on a gigantic Imax 3D screen is a lot like dreaming. Your eyes are constantly bombarded by beautiful, surreal images; your ears with melodious, synthesizer-driven music. Not all the qualities of dreams, however, are desirable in movies. Like a typical dream, the budget-busting new sequel from the Walt Disney Company also has a tendency to defy logic and disregard common sense, and that's not good for a science fiction adventure yarn.

The trailer of TRON: Legacy

Sam Flynn (Garrett Hedlund), a rebellious 27 year-old, is still haunted by the sudden disappearance of his father Kevin Flynn (Jeff Bridges) more than 20 years ago. When Sam visits his dad's old video arcade to investigate a mysterious message supposedly sent by Kevin, Sam finds himself magically transported to the Grid, the digital world where his dad has been trapped for 25 years. After father and son are reunited, Kevin explains to Sam that the Grid is now being ruled by the power-hungry Clu, whom Kevin created in his own likeness. Clu is the reason why Kevin has been unable to return to the real world. Sam, however, convinces his dad that it's worth a shot. With the help of the fearless female warrior Quorra (Olivia Wilde), father and son attempt to escape from the cyber universe which Kevin created but which Clu now controls. Will Sam and Kevin succeed in escaping? Will they find their way back to the real, non-digital world?

TRON: Legacy is an astonishing movie to look at. With nods to other landmark science fiction opuses such as The Matrix, Minority Report, and 2001: A Space Odyssey, the film's production design is superb. The sets which show various parts of the Grid, for example, are all the more striking because of their economic use of color- their palette confined to blue, white, black, red, and orange (the two latter colors are used only by the bad guys). In that sense, TRON Legacy almost looks like the anti-Avatar. Where Avatar beguiled us with a lush Pandora that was teeming with flora, fauna, and countless rainbow-colored creatures, there is scant evidence of Mother Nature's green might in TRON. It is an artificial world that's born of cold steel and glass, and illuminated by neon. The costumes worn by its inhabitants are likewise alluring, the form-fitting costumes very flattering on the film's young stars, Olivia Wilde and Garrett Hedlund. With these and the assorted vehicles which appear at the speed of thought during the film's many chase scenes, not to mention the flawless visual effects that allow Oscar winner Jeff Bridges to appear 25 years younger than he is today, Tron: Legacy is crammed with enough eye candy to outdazzle anyone's most captivating dreams.

That these visuals are so cool is hardly surprising, especially since glimpses of them were included in the movie trailers. What I was totally caught off guard by was how beautiful the film's musical score is. Composed by a Grammy-winning pair who call themselves Daft Punk, the music of TRON Legacy is a melodious blending of orchestral and electronic instruments that recalls the dreamy, melancholy music that Vangelis composed for the sci-fi cult classic, Blade Runner. It is, for my money, the best motion picture score I've heard in many years, a work which instantly evokes the sound of great 80s science fiction films (Blade Runner and the original TRON were both released in 1982) while at the same time sounding confidently original. TRON: Legacy is not only an astonishing movie to look at, it's also a beguiling movie to listen to.

I only wish that the scriptwriters had operated at the same level as the production designers, visual effects artists, and musicians who worked on the film. One narrative problem of TRON: Legacy is the ease with which its protagonists deal with the obstacles they encounter in the Grid. Mere minutes after arriving in the cyber world, for example, Sam wins his first deadly disc fight handily, even though he's had no prior experience in the brutal game. Stuff also happens as the plot progresses that contradicts what we've been told. Case in point- the location of Kevin's hideout. Quorra tells Sam in one scene that Kevin has designed his hideout and located it in an area of the Grid that makes it impossible for the bad guys to go there. And yet, towards the climax, the bad guys do find the hideout and pay it a visit without any trouble. There's also an object owned by Kevin that he guards with his life, because losing it to the bad guys, he exclaims, would be disastrous. Later, though, the object IS obtained by the antagonists... in the most confoundingly simple way imaginable.

In the end, it's script flaws like these which diminish the impact of TRON: Legacy and prevent it from joining the ranks of the great sci-fi movies which it pays visual homage to in its 125-minute running time. If only its director had held the verbal qualities of those films' scripts with as much as regard as he did their visuals, the Grid would be a much better place, and TRON: Legacy a much better movie.

Check where the movie is showing