The first human Green Lantern is about to save the world.

The question of the week for movie fans: how good or how bad is Green Lantern? Comparing it to other DC Comics inspired movies, I'd say it's better than the dragging Watchmen but not as good as Tim Burton's stylish Batman. Using the cinematic adventures of rival Marvel Comics as pegs, I'd offer that it's more entertaining than Daredevil, but not as good as Spider-Man 3 (which was a letdown). Despite a charismatic performance by Ryan Reynolds and loads of what the kids from Super 8 call "production value," Green Lantern is just an okay movie, no more, no less.

Watch the trailer of Green Lantern

The Green Lanterns are an intergalactic squadron with thousands of members tasked to maintain peace and order throughout the universe. Each member of the corps is chosen by a mystical and powerful ring, which confers superpowers on the one who wears it.  Hal Jordan (Ryan Reynolds), a cocky test pilot from planet Earth, is deemed worthy of membership into the corps, and is given the mystical ring by a dying alien one night. Though initially reluctant to assume his role as protector of our sector of the galaxy, Jordan changes his mind when he finds out about a malevolent, fear-fuelled force known as Parallax that's headed straight for Earth, with only annihilation on its mind.

While Reynolds brings loads of charm to the adventure-his Hal Jordan is equal parts Tom Cruise's Maverick from Top Gun and Robert Downey Jr.'s Tony Stark from Iron Man-he's not given much to do here that we haven't seen in other, better scripted  superhero flicks. Where Peter Parker/Spider-Man got to hold his dying Uncle Ben in his arms, and Thor had that searing exchange with his father Odin in the halls of Asgard, all Ryan Reynolds/Hal Jordan has is a moment where he gets to emote with a photograph of his dearly-departed dad. There's no question that Reynolds has the acting chops and the physique to fill out his Green Lantern costume. What the writers should have done was  provide him with more emotional baggage and angst, as the best superhero movies have done since 1978's Superman The Movie. 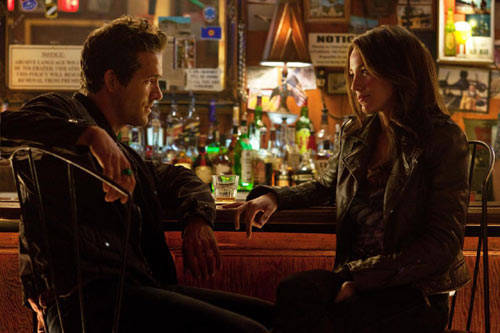 The absence of compelling drama in Green Lantern is all the more puzzling considering that nearly all the other formula elements and clichés of the genre are present, cribbed from past blockbusters. The film begins, for example, almost exactly like Thor-with beautiful shots of the cosmos accompanied by a voiceover telling us a back story. Another example:  the night Hal Jordan becomes the first human Green Lantern is also the same night that Dr. Hector Hammond (Peter Sarsgaard) becomes infected by an alien substance that will transform him into a large-headed villain. That's just like in the first Spider-Man movie, where Peter Parker (Tobey Maguire) became the web-headed hero and Norman Osborn (Willem Dafoe) became the Green Goblin the same night. Hal Jordan also makes his spectacular, public debut as the Green Lantern while saving his lady love Carol Ferris (Blake Lively) from an out of control helicopter, much like the similar but better executed scene in Superman The Movie involving Superman (Christopher Reeve) and Lois Lane (Margot Kidder). This is the best that Green Lantern's four credited scriptwriters could come up with? A wall to wall rehash of the best bits from other superhero movies?

Giving the writers credit where credit is due, however, there are two unforgettable lines in the film, delivered by two supporting characters.  The first is delivered by Hal's flight navigator friend Tom (Taika Waititi) in response to Hal's story about being given the ring by a dying alien. Consisting of two words, it'll probably be the most quoted line from the movie. The other unexpected line, delivered by Blake Lively, is an amusing jab at superheroes who wear inefficient disguises. It's an observation that marks the only instance in the film where the story overturns a genre cliché.

These two gags aside, however, déjà vu will be a constant companion to those watching DC's latest comic book hero-turned cinema screen adventurer. The worst example of this seemingly copy-paste approach to scripting is a climax that's resolved far too easily and quickly, one that involves a situation we've already seen in 2007's Fantastic Four: Rise of the Silver Surfer. 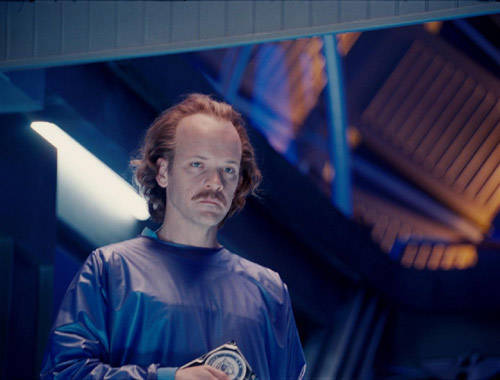 Helping to distract somewhat from the script's shortcomings are Green Lantern's otherworldly visual effects, the most stunning examples of which are the scenes which take place on the alien planet that serves as the Green Lantern Corps headquarters. It might be wise, though, to see the movie in 2D rather than in 3D. The 3D showcased in Green Lantern simply isn't as immersive as the 3D seen in recent spectacles like Thor and Kung Fu Panda 2, which truly gave the viewer a sense of depth and made characters and objects closer to the camera pop out from the background. In Green Lantern, I counted only three shots-all of them showing Hal Jordan flying between craggy cliffs-that made good use of the gimmick.

With Thor and X-Men: First Class, Marvel Studios made it look easy to make cool  superhero movies using beloved comic book characters. DC's latest effort reminds us that it's not that easy after all. As Kermit the Frog used to sing, "It's not easy being green."

Green Lantern Action Review Adventure Comics
Your Guide to Thriving in This Strange New World
Staying
In? What to watch, what to eat, and where to shop from home
OR
Heading
Out? What you need to know to stay safe when heading out