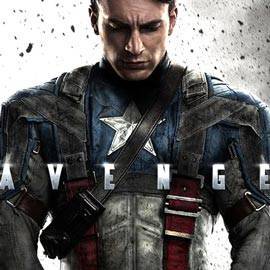 How does this superhero film compare to other Marvel films like <em>Thor</em> and <em>X-Men:First Class</em>? 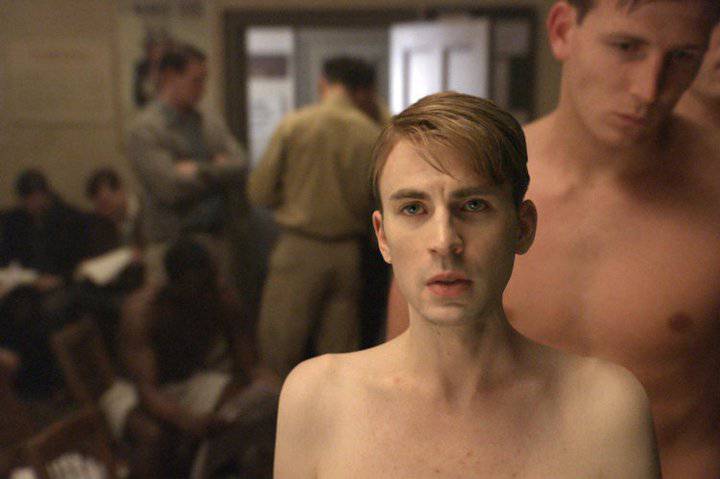 It's 1942 and World War II is raging in Europe and the USA. The patriotic but skinny Steve Rogers (Chris Evans) wants to do his part to defend America, but he's repeatedly rejected by the military for being a 90-pound weakling. But when Rogers proves that his brave heart can more than make up for his lack of brawn, he's chosen by Dr. Abraham Erskine (Stanley Tucci) to become the first guinea pig in a secret experiment to produce an army of super soldiers. The procedure is a success, with Rogers metamorphosing into a taller, stronger, and bulkier being. But when Nazi saboteurs kill Erskine in cold blood, it's not long before the First Avenger finds himself in his first superheroic adventure in Europe, battling the quasi-scientific Nazi splinter group Hydra and its maniacal head,  Red Skull (Hugo Weaving).


I've always preferred Marvel's superheroes to DC's because Marvel's characters were always more flawed and thus, more interesting. Before they became heroes in red and blue costumes, both Peter Parker (Spider-Man) and Steve Rogers were social outcasts  who were picked on by their peers. What I especially like about the script of Captain America: The First Avenger is how it underscores how Rogers is motivated not by a desire to kill Nazis, but to make a stand against bullies. And indeed, the movie's funniest lines and incidents all depict the insults Rogers has to endure as he tries to be accepted as a soldier despite looking like a shrimp. One such amusing scene has a disheartened Col. Philips (Tommy Lee Jones) saying, "This kid makes me want to cry," when he sees Rogers struggling to keep up with other soldiers during training.


Being a Steven Spielberg fan, I was also entertained by the many scripted tributes to the Indiana Jones movies and Close Encounters of the Third Kind (CE3K) in Captain America. The CE3K tribute takes place at the onset of The First Avenger, and shows an intriguing object being unearthed in an extremely hostile, windswept environment. Tributes to Spielberg's Indiana Jones adventures are scattered throughout the film. The Red Skull's line about Hitler wasting his time "digging for trinkets in the desert" is a dig (pun intended) at the search for the Ark of the Covenant from Raiders of the Lost Ark, while the Ark itself has a mystical counterpart in Captain America's Tesseract, a glowing cube which Red Skull is obsessed with.


Unlike the script for Raiders of the Lost Ark, however, the screenplay of Captain America is flawed. One such flaw is the shortage of incidents that show the developing attraction between Rogers and Peggy Carter (Hayley Atwell). Because the movie has only one "kilig" moment between the two- the scene where Carter notices Rogers holding a picture of her in a newsreel- you're unlikely to be moved when their budding romance is endangered in the climax.


The climax itself is the script's second major problem. Simply put, the ending won't satisfy viewers who want to enjoy Captain America as a stand-alone film. It's only those who see The First Avenger as a mere prologue and prequel to The Avengers who'll have reason to cheer at the end.


Disappointing climax and romantic subplot problems aside, however, there's a ton of  other pleasures to be enjoyed in Captain America.  My favorite is the sparkling song and dance montage that shows the war bond-endorsing hero surrounded by leggy USO girls. As a showstopping showcase of 1940s optimism, there's never been a scene quite as charming as this in any other superhero flick. Adding to the sequence's wonderful retro vibe is the intentionally comical-looking costume Rogers wears, which resembles what the superhero wore in the 1944 movie serial, Captain America.


Also worth the additional P100-P150 cost of a ticket is the sensational 3D conversion, which generously enhances the stunning, larger-than-life production design and the many exciting action scenes. Among the best examples is Rogers' nighttime trip to the 1943 World Expo in the Big Apple, which, though brief, is a scene that has all the magical allure of a child's first visit to Disneyland. Also standing out for their wonderful exploitation of 3D's immersive perspectives are a car-and-foot chase in the streets of 1940s New York, and an explosive action sequence set in the Swiss Alps.


For all the movie's computer-generated razzle dazzle, however, it is Chris Evans' disarmingly sincere portrayal of Steve Rogers that allows the movie to weather its occasional rough spots. My biggest fear before seeing Captain America was that Evans would bring his cocky Johnny Storm persona from the Fantastic Four movies to this period war movie. I'm glad that those fears were unfounded- there's no trace of Evans' Johnny Storm in his Steve Rogers, either before or after the life-changing, physique-altering serum injection.


As his feisty love interest Peggy Carter, Hayley Atwell has also created a unique Marvel female, a lady who retains every ounce of her femininity even as she's throwing mean punches at the men and boys who underestimate her.


Oscar winner Tommy Lee Jones and the Oscar nominated Stanley Tucci also elevate the acting in the film to a level that's almost at par with the performances in Thor. The fly in the ointment in the cast is Hugo Weaving's Red Skull, whose German accent sounds painfully amateurish compared to the one used by Christoph Waltz in his Academy Award-winning turn in Inglourious Basterds. But I guess that's excusable in a World War II comic book movie whose title is Captain America, and not Captain Germany.


For even more awesome fun, make sure you remain in your seat until you see what's after the end credits.