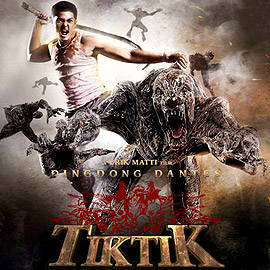 Is there more to Erik Matti's filmmaking than fancy effects? 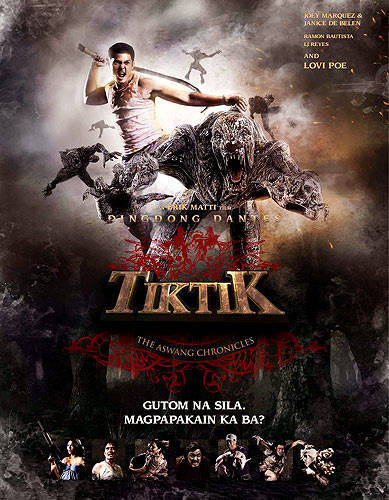 (SPOT.ph) Ah, the permutation of the aswang myth. Erik Matti gives it a go in his latest movie Tiktik: The Aswang Chronicles, which stars Dingdong Dantes as Makoy, a guy trying to save-not mankind but irate his pregnant girlfriend Sonia (Lovi Poe) and their unborn baby from you guessed it: aswang, that fearsome folkloric monster we've seen many times on the screen.

I rather like this version. Using a simple plot (save baby from monster) and classic archetypes (there's an anti-hero who starts off bad but ends up, well, a hero and a father-and I've said this before and I'll say it again: Dingdong Dantes is so hot), Aswang Chronicles flows at a fantastic pace. Timed like Tarantino (set to the same sort of bad ass soundtrack), imbued with the same we're-all-going-down-together bravado, Tiktik never slows down. This Hollywood blockbuster school of timing is so refreshing to see these days, when horror has become all about flickering lights and creaking rocking chairs. I'm just happy to see a big budget Pinoy action/horror doing well at the box office. They sure put that seventy mill to good use. There is an awful lot of (what I call in my head) fake background, which I normally don't love so much but in this case, looking quite seamless at least to my un-technical eye. It's very slick, in the style of Zach Snyder's 300-so visually styled that it can't possibly be anywhere in the Philippines, least of all Pulupandan, Negros. There's lots of bongga creature design and sort of comic book, este, graphic novel inspiration. (I'm sure it took a truck load of talented people working in post production to pull it off.)

It's rather spectacular, too spectacular for my taste. But the kid behind me was pleading to his mother-ayoko na, ayoko na-as if tired na of the aswang trying to eat poor pregnant Lovi's baby. There were, literally, toddlers sitting in the row behind me, looking just a little older than the tasty little newborn in the movie.

Fortunately there's more to Erik Matti's filmmaking than fancy effects. My favorite parts are the little funny moments (like Ramon Bautista in lipstick and the fat aswang jokes) spread out through the film. The aforementioned Ramon Bautista and (surprisingly enough) Joey Marquez make a great comedic duo, the perfect foil for Dingdong's macho-broody action hero. Janice de Belen outdoes herself the overacting department and manages her best work ever (since Pridyider) when her arm is ripped off by a rabid aswang. The production design team also outdid themselves-there's blood and guts here to feed an entire aswang baranggay.

It's interesting to gawk at aswang society in the remote corners of Pulopandan, where they live deep in the forest and slaughter animals for a living. They coven basically look like really pale people wearing derelict couture, and when our hero and his sidekick stumble into their lair, things start to unravel: the pig brought home for lechon turns into an aswang, soon an entire family of monsters are after them, and then of course the whole coven shows up, with the supreme leader (a marvellously muscled and white sando wearing Roi Vinzon) who promises to wipe out the humans. The younger members of the coven all rally around the father aswang, who transforms into every inch the tiktik-a large, winged shrieking thing truly the stuff of nightmares.

But the humans use all their anti-aswang tricks: nothing like salt, garlic (Boy Bawang also an option), and that good old buntot ng pagi-the severed tail of a sting ray-to slay the terrible creatures. Note that all it took was traditional folk remedies to battle fearsome monsters created by technology. All weapons can be found in the average Filipino kitchen, except the buntot ng pagi which can be found in Quiapo, beside the church.  No matter how elaborate the creature design, how large the explosion, and how long the night-sometimes all it takes is the light of day to see these monsters melt before our eyes.