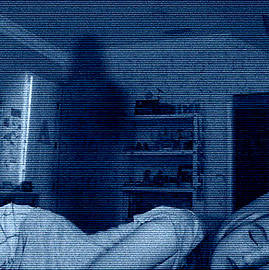 (SPOT.ph) Paranormal Activity 4's events take place in a Nevada suburb, in the home where typical teen Alex (Kathryn Newton) lives with her parents and her younger brother, Wyatt (Aiden Lovekamp). Alex's life seems normal enough- she even has a "sort of" boyfriend named Ben (Matt Shively) who's always visiting her at home or Skyping with her. But things change when Alex's parents take in little Robbie (Brady Allen) from the house across the street when his mom is hospitalized. Soon after Robbie moves into her house, Alex begins hearing strange noises. To prove to her skeptical parents that she's not imagining things, Alex-with Ben's help- rigs three laptops to record what happens in their home, 24/7. It's not long before the footage offers evidence that Robbie has indeed brought something sinister with him into Alex's home: a supernatural entity that's very interested in her six-year-old brother.

The lead characters are teenagers. PA4 is the first movie in the series to have an adolescent girl as the lead, and teen actress Kathryn Newton, as Alex, is this four-quel's  most refreshing new ingredient. PA4 marks a rare instance in a Hollywood movie when a 14-year-old female character is actually played by a 14-year-old actress. The scenes in the film where she's skyping with Ben (an equally talented Matt Shively) and talking about such mundane things as whether or not she farts in her sleep ring with unscripted authenticity for the most part (see minuses). 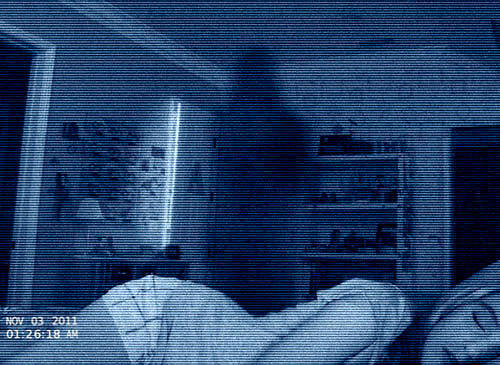 The night vision laptop footage. If Paranormal Activity 3's most unforgettable visual gimmick was the rotating electric fan that was modified to shoot panning shots, PA4's most innovative, striking footage comes from a computer equipped with a night vision feature that makes darkened rooms light up like a million stationary fireflies. Sadly, though, the gimmick isn't maximized the way the panning CCTV was in PA3. Though the night vision footage is shown onscreen several times in PA4, it's only used for two very minor scares.

The heroine's contrived use of her laptop camera. In the above "Pluses," I praised the effortless realism exhibited by actors Kathryn Newton and Matt Shively, who play the film's laptop-loving adolescents. Yes, they are totally convincing as typical teens in the movie, but only when they're flirting with one another via Skype or actually conversing face to face. Sadly though, the script forces them to do some unforgivably silly things, too. The character of Ben, for example, is creeped out when he sees the night vision footage of Robbie being hounded by an unexplainable flash of light. Why then, does he stop watching all the footage from that point onward? If you had recorded something that remarkable, wouldn't you be excited to watch everything following it and examine every byte of it frame by frame? The character of Alex fares even worse at the hands of the scriptwriters in the obligatory scary set pieces. Because the Paranormal Activity movies get their thrills and chills from the surveillance footage, poor Kathryn Newton, as Alex, is made to put herself in two life threatening situations in the film, all while recording everything around her using her laptop! And we're not just talking about her holding the laptop up so she can see her face and what's behind her...we're talking scenes where she uses the laptop to record what's in front of her as well, crossing streets at night and entering dark rooms with no regard for her safety. If someone like Alex existed in the real world, she'd put a whole generation of older cameramen out of work! 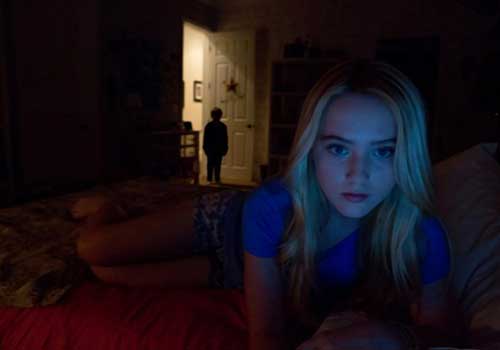 The convoluted story. The concept of the first Paranormal Activity was simple but effective: a young couple hears strange noises in their home and uncovers evidence via 24/7 camcorder footage that a demon- not a ghost- has moved in with them. PA2 added a soap operatic dimension where a woman passed a curse to her sister, not to mention a plot point that had to do with first-born sons. PA3 took us back to the childhoods of these two sisters and added a witch's coven to the melodramatic mix. And so, to fully appreciate Paranormal Activity 4, you'd have to watch parts 1 to 3 beforehand, or read their detailed synopses on IMDB. Even if you did that, though, PA4 would still leave some nagging questions unanswered, such as why are there two little boys in this installment and why does the demon take such a long time to act?

The familiar scares. Ominous shapes revealed by the subtle movement of particles. Doors opening and closing by themselves. Bodies defying gravity. Necks being broken. A creepy child talking to an imaginary friend. Loud banging noises. Followers of the Paranormal Activity series have seen and heard these before, and they're all lazily recycled in PA4. There are also scenes whose build-ups are far more unnerving than their eventual pay-offs. A scene in a bathtub threatens to become a bone-chiller, but fizzles out just as it's becoming gripping. Similarly, references to such horror landmarks as The Omen, The Changeling and The Exorcist do nothing more than prime the viewer for a horrifying event...that doesn't come.

IN BRIEF: There are still a few jolts to be had in Paranormal Activity 4, but they're just variations on tricks that were much better executed in previous installments. PA4 also loses points for a muddled plot and for making its poor heroine act like the world's first suicidal teen videographer.