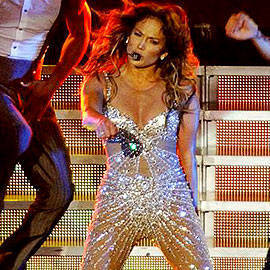 The Latin superstar returns to the stage with her greatest hits.

(SPOT.ph) Jennifer Lopez, otherwise known as J.Lo, held nothing back in a two-hour powerhouse performance at the SM Mall of Asia Arena yesterday, November 26. This is the third stop for the Asian leg of her Dance Again world tour where she is to perform her greatest hits. In true J.Lo fashion, the entire concert was an enduring, high-energy program jampacked with her almost-classic songs, showstopping dance numbers, amazing laser lighting, and fireworks.The concert raised eyebrows for its prices (front-row seats cost double the minimum wage), but after that spectacle, for J.Lo fans everywhere, truly, her love didn’t cost a thing. In no particular order, here are 10 highlights from last night: 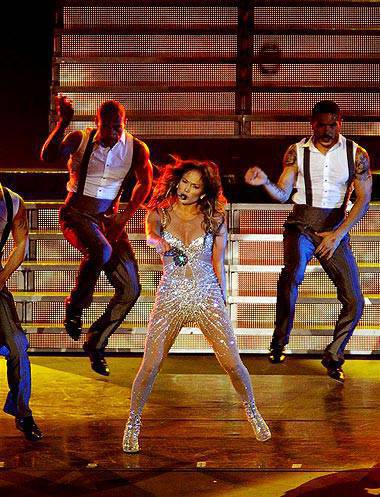 Now we know where J.Lo’s "glow" comes from. We wanted a brilliant performance and, of course, she delivered-right down to the tiny glittery things she called costumes.

J.Lo had a total of six costume changes (excluding accessories like her fur coat and hat), all sparkly and all strategically revealing a different part of her famous anatomy: a stringy rhinestone maillot that left little to the imagination (her famous behind), a glittery pants and bustier ensemble (her abs), tiny blue and pink dresses (her legs). She ended her performance in a form-fitting nude catsuit blinding with diamonds.

On a side note, we also loved her dancers’ shimmering, almost luminescent blue tuxedos in her "Hold It Don’t Drop It" performance.

Speaking of revealing outfits, J.Lo was generous enough to flaunt her most delectable feature-her derrière, which she generously "wiggled" and shook for the audience ("I’m Into You"; "Let’s Get Loud"). Sorry Kim Kardashian, but J.Lo was way ahead of you when it came to having huge "assets."

We knew J.Lo’s Dance Again album featured some of her greatest songs, but hearing them actually being sung brought back memories. J.Lo’s repertoire included her first single "If You Had My Love," "Waiting For Tonight," "Let’s Get Loud," "All I Have," "Ain’t It Funny," "My Love Don’t Cost A Thing," and "On The Floor" to name a few. Her performance brought back lyrics we had inadvertently and unconsciously memorized and being at the concert suddenly felt like singing live karaoke with the superstar herself.

A packed SM MOA Arena excited as the concert began

Save for social media (where she had some reported altercations with trolls), where on earth has Sharon Cuneta been? Mystery solved. We found her pumping it up with J.Lo front row and center. Other celebrity attendees included Anne Curtis, Belle Daza, Jessy Mendiola, Victor Basa, and Divine Lee.

5. A fan being asked to sing on stage

As a tribute to her fans, J.Lo obliged us with her very first single from the On the 6 album, "If You Had My Love." Not long after she started, the superstar stopped the performance to ask a lucky fan to sing with her. Looking nervous to the point of almost being teary-eyed, the excited fan belted out "Tell me who can I trust, if I can’t trust in you..." with her idol.

Shortly after her "Let’s Get Loud," performance, J.Lo received a Philippine flag from a member of the audience, which she proudly wore as a cape for a few minutes. She reached down into the audience once again to borrow a camera and took her own photo with the flag still around her neck.

7. The homage to her roots

J.Lo dedicated a part of her concert to her Bronx roots, singing songs from her hiphop and RnB phase like "I’m Real," "All I Have," and "Jenny From The Block." The stage was even recreated to look like a glittery version of her home city. 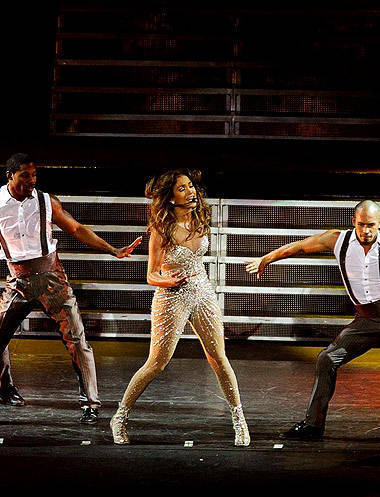 8. Her children, Max and Emme

They weren’t there, obviously, but in her performance of the mellow "Until It Beats No More," off-air photos and videos of her with her adorable twins were flashed on screen and J.Lo was shown as the doting mother we always forget she is.

"Papi" came with a warning: that J.Lo was dedicating it for the papis in the audience but that there was a treat for the women, too. Soon enough, all the male dancers on stage (Casper Smart, J.Lo’s current flame, included) took their shirts off to reveal their chiseled dancer physiques. They went on bare-chested for the next two performances. Sadly, "On the Floor," wasn’t as steamy as we had hoped.

We were intrigued to see how J.Lo and her creative director/dancer/choreographer beau Casper Smart would appear on stage, but there wasn’t any awkwardness (not that we were Mark Anthony fans). The audience got uber kilig when a video of the pair dancing to "Baby I Love You" was aired. Casper and J.Lo also had another dancing duet in the final performance of the night, the eponymous Dance Again, where Casper showed off some of his acrobatic skills.

Jennifer Lopez Jlo Zuhairmurad Danceagain Greatesthits Manilaconcert Moaarena Caspersmart
Your Guide to Thriving in This Strange New World
Staying
In? What to watch, what to eat, and where to shop from home
OR
Heading
Out? What you need to know to stay safe when heading out