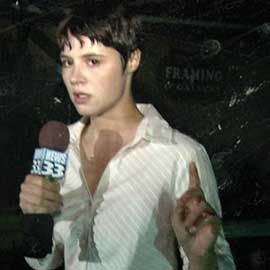 Does another "found footage" flick chronicling unknown deaths sound good to you?

(SPOT.ph) From the producers of Paranormal Activity and Insidious, The Bay is another "found footage" flick that chronicles the heretofore unknown deaths of dozens of people and millions of fish in and around a town near Chesapeake Bay. As uncovered and leaked by by a young TV news reporter named Donna (Kether Donohue), what was thought to be a mere ecological disaster that took place in July 2009 turned out to be a discovery so horrific that the US government tried to conceal it from the public.


It’s directed by an Oscar-winning director! In what must be a first in the pantheon of found footage films, The Bay is helmed by an Academy Award winning director...Barry Levinson of Rain Man fame. What Levinson brings to The Bay is an intelligent plausibility that’s rare for the genre, something that last year’s ridiculous Apollo 18 would have benefited immensely from. And so, The Bay isn’t contented with merely scaring viewers with gross-out shots of a new organism that eats its victims from the inside out and devours their tongues. Levinson also gives the story an added layer of credibility by including scientists in the picture to discuss the likelihood of mutated creatures already existing in our chemically-tainted waters. Levinson also paints an unflattering but believable portrait of a government eager to cover up the existence of such blood-curdling organisms to protect the tourism trade. Part Jaws, part Alien, and part Contagion, what ultimately separates The Bay from its fellow found footage flicks is its ability to cloak a science fiction conceit in scientifically plausible clothing.

The precious few money shots. A bug-like creature crawls up the arm of a freaked-out man. A lipstick camera reveals a terrifying ecological threat concealed in a fish’s innards. A fist-sized organism makes its presence felt by moving beneath the skin of a man’s belly. The Bay doesn’t have a whole lot of visual stunners compared to other horror and sci-fi movies, but the few morsels it does offer viewers make quite the impression. These shockers, which are shown very briefly for maximum impact, are probably the main reason why The Bay is rated R-16 by our MTRCB. (It was rated R in the USA, for adults 18 years and above only.) 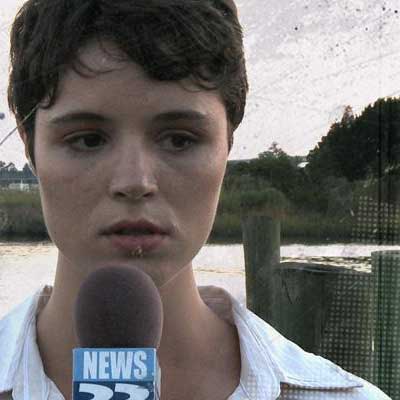 The unsympathetic lead character. The film’s found footage is leaked by environmental activist Donna Thompson, a rising TV news reporter at the time of the horrific events of July 4, 2009. In the years since, she’s dedicated her life to collecting videos surrounding the event which the powers-that-be so desperately wanted to delete from existence. The problem with the Donna character is that she doesn’t make us care for her, even though she’s ostensibly risked her life by sharing these forbidden videos with us. Her comments on the events documented in the videos are mere variations of, "These poor people...they have no idea of what’s about to happen to them." Aside from merely telling us what’s quite obvious, she’s not very sympathetic either. Any movie that attempts to tell its tale from the point-of-view of someone who’s neither interesting or sympathetic is asking for trouble.


The jumbled up timeline. Most found footage films present their stories chronologically, showing what is at first believed to be a minor disturbance escalating into a major crisis as the hours and days tick away. The Bay tells its story differently. While it does start out by showing how a seemingly normal 4th of July celebration in 2009 was turned upside down when a large woman suddenly started coughing up blood, the movie then jumps back further in time to May 2009 to show a team of fish scientists making a discovery that sends chills up their spines. The rest of the film then presents other found footage relating to the deaths of the townspeople, alternating between the events of July 4, 2009 with what happened in the weeks before the bloodbath soaked the town. It’s a complex, linear/non-linear hybrid form of storytelling that appears to have been inspired by Contagion. (Like The Bay, Contagion is also the work of an Oscar-winning filmmaker, Steven Soderbergh of Traffic fame.) And so, watching The Bay is a much more intellectually taxing experience compared to watching any of the Paranormal Activity films or Deep Water. It’s not the usual horror flick that allows you to leave your brains at the door. In fact, it actually demands that you watch, think, and pay attention. 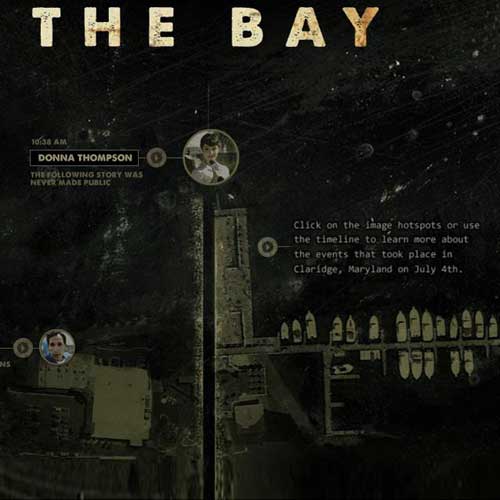 IN BRIEF: While The Bay gains points for being smarter and more believable than most found footage flicks, it loses points for not providing enough of the jolting scares that fans expect from movies in the genre, and for not giving us anyone to care about or root for.