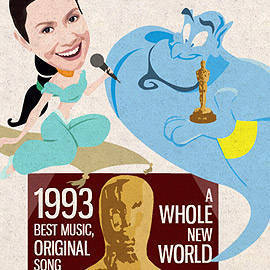 The Road to the Oscars for Filipinos

It’s Oscar day, and we estimate another five years before a Pinoy gets that coveted statuette!

(SPOT.ph) It took 10 years for an African-American to be nominated for and win an Academy Award. Hattie McDaniel changed the face of the entertainment industry when she won Best Supporting Actress for her role as Mammy in the 1939 blockbuster, Gone with the Wind. It took another 10 years for a second nomination and a further five years for a third. Twenty-four years later, Sidney Portier’s finally repeated the McDaniel feat and in grander fashion; his portrayal as Homer Smith in Lilies of the Valley bagged him Best Actor--the second win for an African-American.

The road to Academy Award glory isn’t easy for anyone. Even for us. Asians first set sight on the Oscar in 1935, receiving nominations for Best Actress and Best Adapted Screenplay, but it was only in 1956, with Yul Brynner’s Best Actor win for his role in The King and I, when the goal seemed to be within reach. While we Filipinos have made our presence known in the Oscar circuit, the journey is still long and winding...but we’re getting there. Check out our infographic to find out just how close we’ve come. 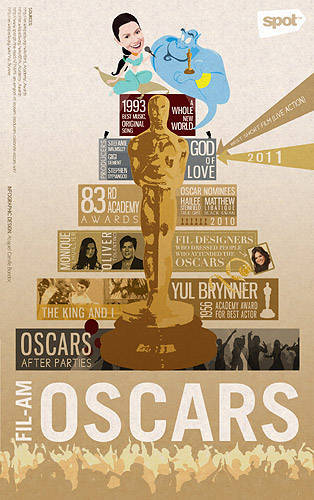 TIER 6: Vanessa Hudgens, Tia Carrere, and other Fil-Ams have been seen partying up a storm in Oscar after-parties.

TIER 5: No, Oscar-winner Yul Brynner is not Filipino, but Patrick Adiarte, who played his son in the award-winning movie-musical, The King and I (1956), is! The King and I was nominated for nine Academy Awards, including Best Picture, and won five.

TIER 4: Though they didn’t attend the ceremonies, their designs dazzled and shone. Monique Lhuillier is a red-carpet favorite, dressing Kristen Stewart in the 82nd Academy Awards, Mandy Moore (for both the red carpet and for her performance) in the 83rd, and Judy Greer in the 84th. For the 83rd Academy Awards, Stephanie Walmsley displayed her Pinoy roots with a custom Martin Bautista piece. For the same year, Oliver Tolentino, meanwhile, designed the outfits worn by Gigi Dement and Matthew Libatique. On a separate occasion, Oscar-winner Anna Paquin once donned a Tolentino creation.

TIER 3: Fil-Ams had a strong showing during the 83rd Academy Awards (2011). New York-based Matthew Libatique was nominated for his gripping cinematography for Black Swan while part-Pinoy Hailee Steinfeld was nominated for Best Supporting Actress in True Grit.

TIER 1: A Whole New World, performed by Lea Salonga and Brad Kane, won two Oscars for Best Music, Original Score and Best Music, Original Song. Though she didn’t exactly receive the statuette, Salonga, together with Kane, were given much-deserved Oscar airtime for performing their duet during the 65th Academy Awards.

Oscars Academyawards Filipinos Roadtotheoscars
Your Guide to Thriving in This Strange New World
Staying
In? What to watch, what to eat, and where to shop from home
OR
Heading
Out? What you need to know to stay safe when heading out