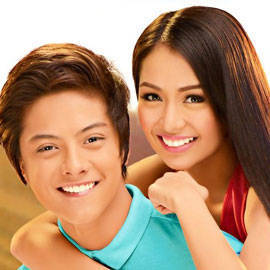 Must Be Love (or a Love Team)

(SPOT.ph) In 1981, the ultimate teen-age dream was Sharon Cuneta and Gabby Concepcion in Dear Heart. Directed by the late Danny Ziacita, Dear Heart captures so perfectly the tenderest part of the youthful Sharon-Gabby romance. Direk Danny handpicked Sharon to play April, a super sheltered, pony-riding prissy pusong mamon princess who falls for the good-for-nothing-tisoy charms of Jimmy Lizares played by Gabby. Danny Zialcita reportedly agreed to do the movie only with the 15-year-old Sharon Cuneta. When Sharon was asked whom she wanted to co-star with, she preferred anyone over Gabby Concepcion. Through divine timing or Zialcita's genius, Gabby Concepcion was cast as her love interest. The chemistry was palpable between the co-stars and it translated on screen into an adorable puppy love frisson between them. And everyone lapped it up because they were glamorous and exhilarating and fresh. Remember that scene when she goes to Greenhills to shop with her yaya (Suzanne Gonzales) and handcuffs her to a rack so she can make takas and spend the day with Jimmy and they get stuck out of town overnight? April and Jimmy end up sleeping in a bahay kubo, separated by a farmer's wife. It was funny without an obvious joke.

After re-watching the movie for the nth time, I was filled with nostalgia for a time when people could zing around Baguio back roads in an old Benz, and went to discos and danced slow dances, and a boy called a girl on the phone late at night to ask her out to lunch. Sharon in Dear Heart was so effortless in her role as a precious girl falling in love for the first time. April Mondragon is the quintessential poor little rich girl of Philippine movies, artless and charming, so that even her strict father Don Manolo (Eddie Garcia at his most gorgeous) cannot refuse his niña bonita. By the end of the movie, Sharon and Gabby are cavorting on the beach-probably my favorite tampisaw scene, decorous and sweet-and on the screen instead of the words The End it says "This is only the beginning." We all wanted to believe it.

(Can any other love team measure up to Gabby and Sharon? Will they ever do a comeback movie? Will the magic still be there?)

It's the Ugly Duckling/best friends falling in love plot which the folks over at Star Cinema like to recycle on a regular basis. And while it offers nothing new in terms of story or style, the movie is super boosted with enough generic charm to catch one's attention, but not enough to keep mine. Perhaps I'm just not the target audience but I can see why the love team of MBL is so popular. Daniel Padilla has a very Robin-esque mojo and I agree with popular sentiment and Boy Abunda-this boy is going to be a big star. Meanwhile, I've always found Kathryn Bernardo to be extremely watchable, even in her terrible launching movie Way Back Home, but especially in Jerrold Tarog's Parola from the Shake, Rattle & Roll franchise, where she plays a witchy teen with a vengeful streak. But in MBL, Kathryn is spunky like a young Maricel Soriano and vulnerably sweet like a teen age Sharon Cuneta. There's no doubt she could become a major star herself.

Together, Kathryn and Daniel are super cute and it does seem like there's good chemistry between them. It's just unfortunate that they were trapped in another trite and predictable rom com stamped with the prevailing taste, badly directed and unfortunately heavily marketed. If only they did something as stylish and properly high gloss as Dear Heart.

But perhaps, along with Danny Zialcita, that era is dead.

Daniel Padilla Kathrynbernardo Sharoncuneta Gabbyconcepcion Dearheart Mustbelove
Your Guide to Thriving in This Strange New World
Staying
In? What to watch, what to eat, and where to shop from home
OR
Heading
Out? What you need to know to stay safe when heading out