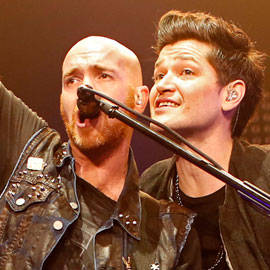 Best in Show: The Script

We toast to The Script’s triumphant second Manila concert

(SPOT.ph) Proof of The Script's love for their screaming, raucous, delirious, lightstick-waving Manila-based fans: they came out on stage for a extra encore to perform the same song they opened the concert with one-and-a-half hours before.

It's a nice gesture. The Irish band had already shredded through the standard "#3 World Tour" set list, the confetti had already been popped, and they'd already taken their bows, but they just really wanted to go up on stage one last time for a fist-pumping send-off...the first time EVER in the world for the band, according to The Script’s own post-concert tweet.

In the midst of the concert's crackling energy, it's those gestures that really connected the band to its fans. We bet lead singer Danny O'Donoghue's numerous kisses to his female fans in the audience didn't hurt either. Plus, bunnies! 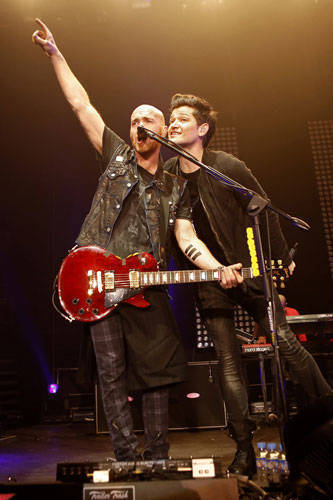 In no particular order, our fave moments from the Easter night show:

1. The band opens up with "The Good Ol' Days," and the lightstick-waving commences

In a nice 90s throwback-perfect for the band's alt-rock tunes-the crowd lights up the Smart Araneta Coliseum with hundreds of glowsticks that sway back-and-forth to the opening song's rousing chorus. 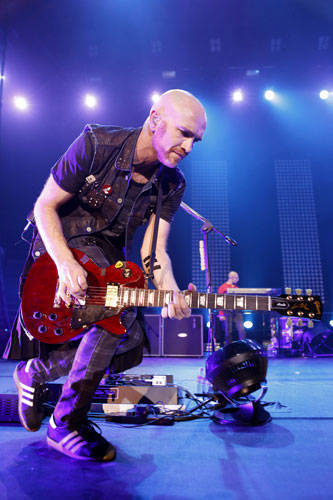 Throughout the show, Sheehan rocks his lower legwear to the max, feeding off the crowd's energy and bouncing, Tigger-like, all over the stage. Throughout the concert, his energy level hovers somewhere between "balls-out" and  "totally nuclear".

Well, they sing along to every song, but for this number, O'Donoghue takes his mic to the front row to give fans a shot at belting out the eponymous line. They're so excited (and we're so excited for them), that a little voice-breaking here and there is readily forgiven. 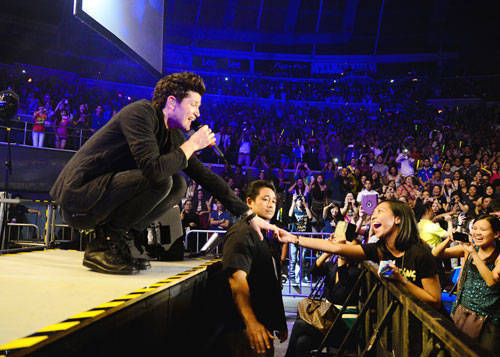 4. Everyone loses it on "Break Even"

Can you blame them? The Script's breakthrough song sends the audience into rapture. One guy near us even closes his eyes and tilts his head back, as if absorbing the song through his pores, while the whole arena reverberates with the chorus. 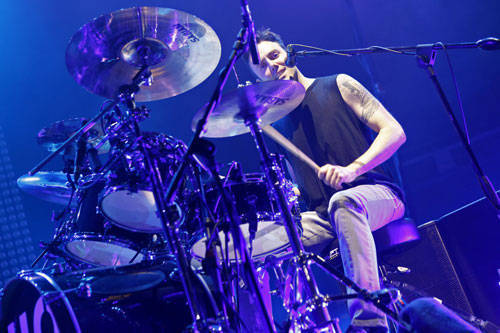 5. Glen Power shows off his chops

Synths straight from the highlands set an almost spiritual tone, before drummer Glen Power barrels in with a drum solo that's the bees' knees. It's a perfect intro to one of the most perfect performances in The Script's entire Manila set-"Science & Faith." We can still feel the goosebumps. Glen later shows off more of his musical range by playing acoustic blues guitar with Danny on "I’m Yours".

"We never know when is the right time or the wrong time to play this song," intros Sheehan, before the band goes into "If You Could See Me Now." Composed by both Sheehan and O'Donoghue for the passing of their parents, it's a powerful, emotional song that clings close to the band's hearts. Sheehan sheds tears as he sings, while O'Donoghue makes the sign of the cross before he belts out the chorus. 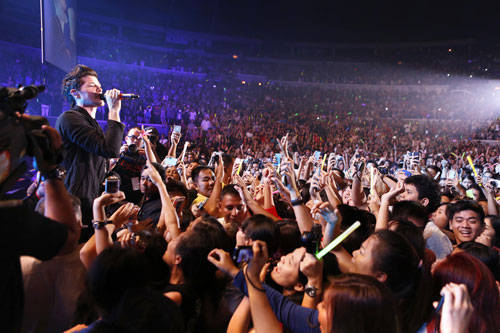 7. Bunnies and beer make for a bizarre break

Apropos of nothing, a troupe of costumed bunnies (the furry kind, not the Playboy kind) appear on stage. The band wishes everyone Happy Easter, puts on boxing gloves, and pretends to punch the lights out of one of the bunnies before posing with them for their concert souvenir photo. "People wanna know where Easter eggs come from, that's what happens," says Sheehan. "The Script punches the shit outta [Easter rabbits]."

8. O'Donoghue and Sheehan have a drink off.

"You don't give a free bar to Irish people, and I hear it's the same with Filipinos," O'Donoghue deadpans as they continue their rather bizarre mid-concert breather. "They just drink it all." Both singer and guitarist prove they can pass for both nationalities as they chug down, without pause, a lot of beer. In the next few songs, O’Donoghue talks about how drunk the beer’s made him.

The Script dares the audience to do something "inappropriate" by dialing their ex right before the band plays "Nothing." O'Donoghue even grabs one of the audience member's phones and sings the entire song into the phone. Lucky ex. Afterwards, the singer jokes, "Do I get to keep your phone?" 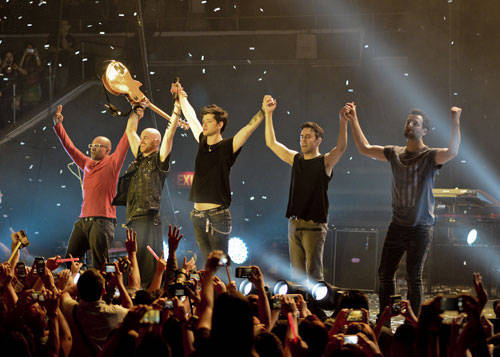 It was pretty clear that the band didn't want to leave. The Script pretends to leave at the end of "For the First Time," but Sheehan stays behind to egg on the crowd to keep on singing the last lines-"Oh, these times are hard, yeah they're making us crazy, don't give up on us baby"-over and over again. Then O'Donoghue appears from the upper box then works his way back to the stage for "You Won't Feel a Thing" and "Hall of Fame." Confetti pops, the crowd cheers, and the orange, green, and white of an Irish flag is unfurled from the seats.

But just when the lights go down and you think it's over, here is the band again, appearing out of the dark for one more go-round of  "Good Ol' Days."

The Script Breakeven Dannyo’donoghue Concert Aranetacoliseum Mark Sheehan Glenpower
Your Guide to Thriving in This Strange New World
Staying
In? What to watch, what to eat, and where to shop from home
OR
Heading
Out? What you need to know to stay safe when heading out