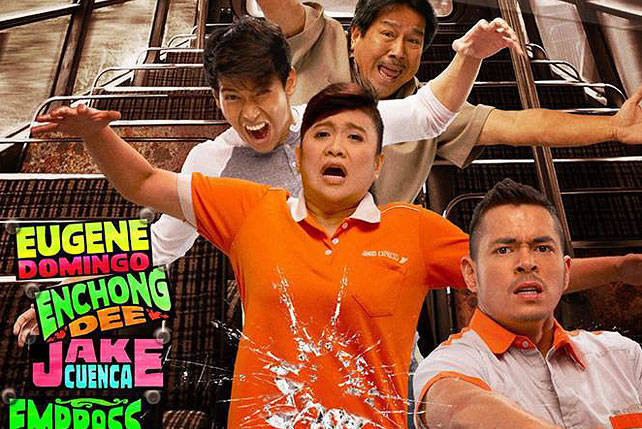 Comedy inherent in every tragedy

(SPOT.ph) The word itself conjures pain. Tuhog is more violent than mere tusok; tuhog is to be impaled, to be strung together, to be pierced, trussed, speared. I suppose when referring to barbecued meats it applies, but the thought of tuhog is undeniably painful.

The premise of Veronica Velasco's new film is equally hellish: a bus collision results in a freak accident where three people are violently injured and rushed to the hospital. The victims-an old baker (Leo Martinez), a bus conductor (Eugene Domingo) and a student (Enchong Dee)-are alive but barely so, conscious that they are stuck in a situation where not all of them will come out alive.

The multi-story line plot unfolds rather slowly with the first story of Tonio (Martinez), a retired man who follows his dream of becoming a baker. His family doesn't understand this dream nor his whims, but at least his pusoy dos buddies do. They play endless rounds and philosophize about life as Tonio bakes and bakes and finally one day gets the perfect batch of pan de sal.

The second story, about a tough lady bus conductor called Fiesta, is the real emotional core of the film. Eugene Domingo gets to flex her acting chops in a role that does not require her to wear a wig or act hysterical-instead she plays an outwardly aggressive and inwardly tortured woman with a shitty job and an alcoholic father (Noel Trinidad, who is wonderful and scary in a Golum-like way). When a new, impossibly hot, and very reckless bus driver (Jake Cuenca) starts hitting on her ("Pano kung pormahan kita?" he asks), Fiesta's life is never the same.

The last story revolves around a student named Caloy (Dee) who is young and in love. He is trying to convince his long-distance girlfriend Angel (Empress Shuck) to do it with him. He has no real problem aside from the fact that his girlfriend may be having an affair in Dumaguete, but Caloy feels it keenly and despite the setback he still believes that love will save the day.

And then, on one hot afternoon, the big accident: Tonio, Fiesta, and Caloy end up helplessly skewered, lined up on a stick and like fish balls no. 1, 2, and 3-a perfect "three-hog"-waiting to be plunged in hot oil. Of course it's completely the fault of the reckless and impossibly hot bus driver (this is probably Jake Cuenca's best work EVER) who is hung over and chasing ghosts from his past. (Not very real, but go figure. I think most bus drivers are not impossibly hot like Jake, and are just high on meth and low on love for their job.)

It's one of those clever we're-all-intertwined type stories with beautifully written dialog (also by Veronica Velasco, co-writing with Jinky Laurel, they of Last Supper No.3 fame) in hyper-articulate almost poetic Filipino. With actors who are comfortable in theater and film, Tuhog is acted very ably by a great ensemble cast: Leo Martinez is a virtuoso and particularly moving; Eugene Domingo is in her element; even the matinee idol Enchong Dee can charm the socks off anyone. And remember what I said about Jake-best work to date. (Someone said to me, rather cattily, "That isn't saying much!")

If you look hard enough, you will find the comedy inherent in every tragedy, and Tuhog has enough of those moments. Perhaps my only problem with it is that it wasn't dark enough, and I mean that literally. I cannot cope with this Star Cinema version of reality where it all has to look like an Anchor Butter world. Why is everything so clean and sharp like a television commercial selling soap or coffee or butter? Why am I seeing flares on Jake's face? To be honest I was waiting for a darker moment (abuse?), a bleaker version (incest?), a real sinking feeling-but it never happened. At least not for me.

And because it is fashionable to make quasi-philosophical statements about life after watching this film, here's my take home from Tuhog, thinking about why they chose to tell this story and how they chose to tell it: what seems random is not random at all.

Ria Limjap Tuhog Moviereviews Philippinecinema Cinemalaya
Your Guide to Thriving in This Strange New World
Staying
In? What to watch, what to eat, and where to shop from home
OR
Heading
Out? What you need to know to stay safe when heading out