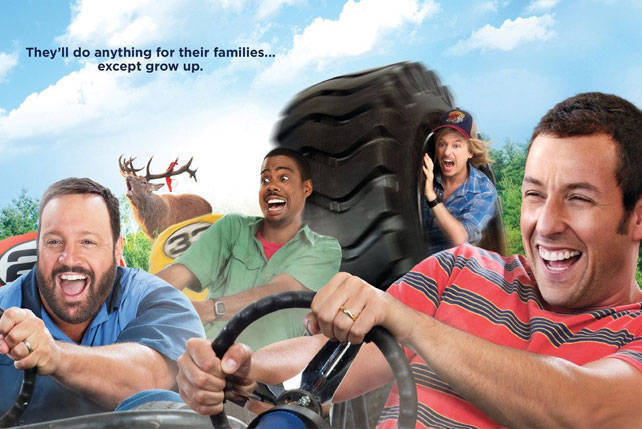 SPOT.ph blogger Paul Daza on why this movie is an "unfunny crapfest"

STORY: How many comic misadventures can a quartet of fortysomething dads get into in a day? Following the hijinks of the hit flick Grown Ups (2010), this sequel shows eternal adolescents Lenny (Adam Sandler), Eric (Kevin James), Kurt (Chris Rock), and Marcus (David Spade) in their hometown, squaring off with a urinating deer, a schizophrenic bus driver, bullying frat boys and more, all on the last day of school. Rated PG-13 for toilet humor, suggestive sexual content, and brief nudity.

The quarry scene. Halfway into the movie, Lenny and his childhood chums revisit their old swimming hole, which can be accessed by jumping 50 feet from a cliff. But the hangout has now been taken over by a posse of hunky frat house boys led by Andy, played by Twilight Saga star Taylor Lautner, who forces the four flabby dads to make the jump while butt naked. The sequence gets laughs because of Lautner's surprising ease with comedy, and because it has David Spade delivering the movie's best one-liner. Lautner's seemingly effortless work as a frat boy who expends way too much time and energy on bromance handshakes is the only pleasant surprise in this comedy, whose cast of seasoned comedians do nothing to uplift the mediocre script. As for David Spade, the one instance he seems energized is when he reacts to the plus-sized Kevin James landing on top of him during the cliff dare, prompting him to deliver the film's one good line. (Good lines are such a rarity in Grown Ups 2 that this exclamation by David Spade is in the trailer.)


The 80s party. Somehow, the storyline of Grown Ups 2 culminates in an 80s-themed party that takes place in Lenny's mansion. There, the film's entire cast shows up, dressed as clones-gone-wrong versions of Boy George, Michael Jackson, Madonna, and Indiana Jones. Though nothing comedically inspired or brilliant happens in the sequence, seeing all those pop culture icons from my youth was enough to make me smile for more than two minutes straight, something the rest of the movie was unable to do. 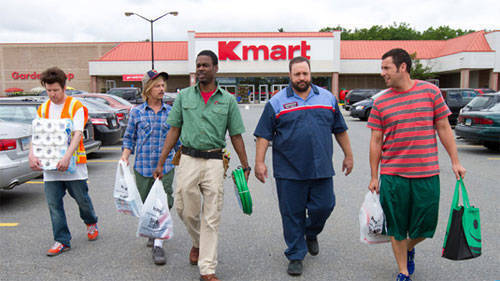 The things I loathed about Grown Ups 2 are the reasons why the movie got a PG-13 rating in the USA: crude and suggestive content, language, brief male nudity, and then some.


Crude and suggestive content. Here are some of the sight gags you can expect from this sequel: many men get kicked in the groin, a stag urinates excessively on Lenny and his family, men in skimpy shorts rub their bulging crotches on a car windshield, and David Spade throws up a foul-looking liquid after riding a tire wheel down the street. Want more? A bus driver takes a dump in a toilet being sold at KMart, a malfunctioning ice cream machine looks like it’s dispensing human feces, and a school principal pees in a pool with lots of kids in it. Oh, and Kevin James proudly shows off his ability to sneeze, burp, and fart in rapid succession, a talent his other friends try to copy. Sandler even attempts it with his wife, played by Salma Hayek, before they make love!


Language. As per the MPAA (Motion Picture Association of America), Grown Ups 2 contains one use of the "f" word,  "...9 anatomical terms, 11 mild obscenities, 3 religious profanities and 4 religious exclamations."


Male nudity. Adam Sandler, David Spade, Kevin James and Chris Rock show their booty briefly in the swimming hole sequence. (This would of course have been counted as a "plus" for the ladies if it was Taylor Lautner doing the butt-baring.) 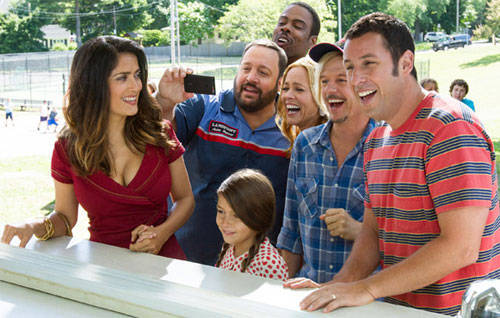 And then some. What the MPAA doesn't cite in their rating is the thread of mean-spiritedness that makes Grown Ups 2 a frequently unpleasant, unfunny comedy. One of Lenny's kids, for instance, hits the broken leg of his brother, causing the latter to yell in pain. The little boy playing Kevin James' son, on the other hand, is made fun of repeatedly because he's bad at math. Not spared from humiliation are overweight gym teachers, the balding, and the cross-eyed. And how does Adam Sandler's Lenny deal with the schizo bus driver who has to take pills for his mood swings? Well, Lenny strings him upside down like a dead duck inside the school bus to incapacitate him!


The unfunny running gags. Running gags are supposed to be such ribticklers that you can milk them more than once in a 90-minute comedy. Case in point, Leslie Nielsen's deadpan delivery of the line, "Don't call me Shirley" from Airplane. The confounding thing about Grown Ups 2 is that the movie's scriptwriters (one of whom is Adam Sandler) make running gags out of things that aren't funny to begin with. In addition to Kevin James' sneeze/burp/fart combo, there's also the repeated use of the expression, "Whaaaaat???" by Tim Meadows' Malcolm, a catchphrase that becomes more painful to hear each time it's used.


IN BRIEF: Only die-hard fans of Adam Sandler and the first Grown Ups flick will get their yucks from this mean-spirited, lazy and unfunny crapfest. If you need a good laugh, you're better off seeing Turbo or Despicable Me 2 again.