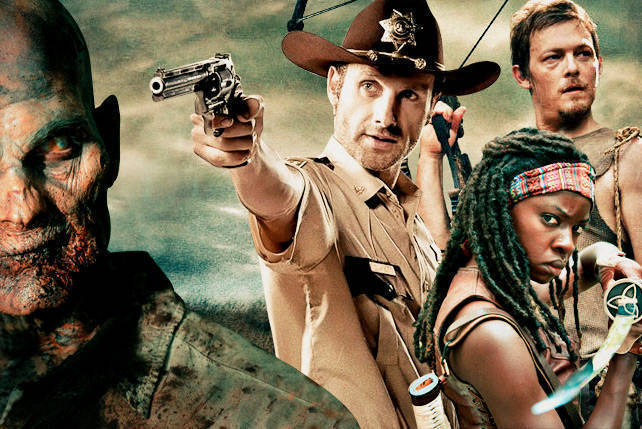 The SPOT.ph Guide to Surviving the Series

(SPOT.ph) We can summarize this one easily: zombies. Zombies walking, obviously. The fourth season opened to record-setting ratings so you might feel like checking out AMC’s The Walking Dead. If you need a crash course before sinking into the couch for a marathon, here’s what you missed in the last...oh, three seasons. No big deal.

The Walking Dead is based on Robert Kirkman’s comic book series of the same name. It was first published in October 2003 and the plot moves leaps and bounds faster than the TV show. This is quite understandable, as zombies are easier to draw than make. Kirkman’s take on the zombie genre received critical acclaim for its rather smart depiction of what people will do should the dead start walking.

There are deviations from the comics and we recommend that you check out the comics as well, but right now, we have to focus on the series.

Getting Into the Fandom: Glossary of Terms and Inside Jokes

Walkers: The zombies in The Walking Dead are called walkers...and biters...and lurkers...and the mob. BUT NEVER ZOMBIES! They’re pretty fast and have sharp teeth that can bite off chunks of flesh. Also, everyone is infected by the "walker" virus so if you die, you are automatically a zombie. Cheers.

The objective: Basically, you’re watching a show where the goal is to survive and not get killed by a walking dead...or human. Similar to most post-apocalyptic stories, the story revolves around group dynamics and there are moments when The Walking Dead shines...and moments when it’s just hilariously stupid.

The Group: The main characters have formed a group called The Group. Who has time to think of a cool name in a post-apocalyptic world? In any case, being in the group doesn’t really increase your chances of survival but you at least get a dramatic death sequence, a reanimation, and another death sequence. 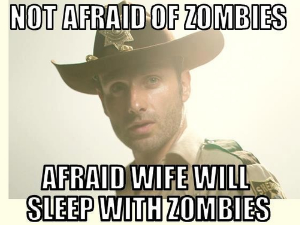 My husband died so I slept with his best friend: This is a joke that you should immediately reference. Rick Grimes (more on the character later) was shot some time before the zombie outbreak. His best friend, Shane Walsh, goes to the hospital to try and save him but he was in a coma so all that was left for Shane to do was barricade his room...and sleep with his wife, Lori.

Stuff and Things: In Season 3, Rick and Lori have a confrontation and Rick dramatically says, "I’m doing stuff, Lori. Things." Yes, it sounds absurdly vague and thus rather stupid...which is the heart of The Walking Dead. The first season is pretty serious but it has now transcended that. It’s incoherent and inconsistent...which has, surprisingly, increased its appeal! 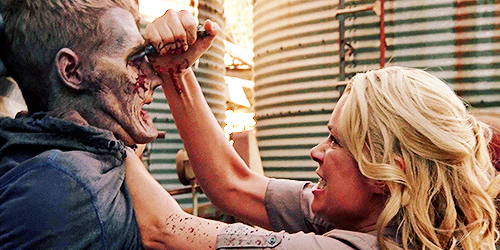 Stabbing zombies in the eye: YES!

Worshipping Daryl Dixon and Glenn Rhee: They are just the best characters in the show. We’re not going to try to sell them too hard. Darly has a crossbow. Glenn went through hordes of zombies to get tampons. They do all the cool things while everyone else has needless drama. They should have their own show, really. 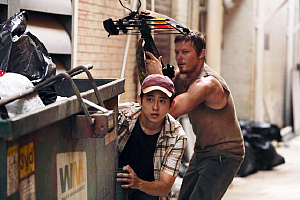 The only two characters that actually matter

Carl Grimes (Chandler Riggs): son of Rick; little boy; gets shot in Season 2 and becomes a major plot point; shoots his own mother; currently in the "rebel" phase of his life.

Michonne (Danai Gurira): black girl with a sword (swords are cool); Andrea’s rescuer in Season 2 transitioning to Season 3; sniffs the evil in The Governor early on, hates him a lot; kills a lot of walkers.

The Governor (David Morrissey): main antagonist in Season 3; real name Phillip Blake; a highly distrubed man; runs a community in a large prison; has a torture chamber, for obvious reasons; kills a lot of people.

The Greenes: Hershel (in photo, Scott Wilson), Maggie (Lauren Cohan), and Beth Greene (Emily Kinney, looks a lot like Luna Lovegood from Harry Potter) own a farm, the setting for Season 2; the Greenes are generally nice, can’t say much about them.

Dale Horvath (Jeffrey DeMunn): wise old man; provides a lot of support for the group; watches the dynamics between his peers and tries to makes things better; killed by a walker in Season 2; we miss him.

Andrea (Laurie Holden): former lawyer; initially an unlikable emotional wreck but develops a backbone, turns into a pretty okay character; her plotline is depressing but then again, she makes poor choices in life; forced to kill her own sister and then forced to kill herself.

10 things to like about The Walking Dead, on the next page!

2. Character growth. We hang on to people like Glenn Rhee and Daryl Dixon, whose personalities evolve as the series progress.

3. Studying the group dynamics. Everything is in shambles and people are still trying to kill each other! We’re more afraid of the living than the dead!

4. Waiting for Rick Grimes’ hand to get severed. It’s nice to see how the program deviates from the comic book and we’d like to see how long Rick Grimes gets to keep his hand. It’s fun that even if you read the comics, the TV show develops the characters differently.

5. We’re on survival mode, too! Characters die (they get reanimated sometimes but they really die) and the show is keeping us on our toes. Will our favorite characters make it to the next episode?

6. The physical fights (as opposed to the emotional turmoil). The shooting, the hacking, the slashing, the running, the action!

7. The look and feel. We’re not experts in cinematography but we appreciate the gritty design of The Walking Dead.

8. It helps us lose weight. We can’t snack while watching it and the thrilling scenes probably make us lose calories from the stress. Thumbs up for that!

9. Even when we’re annoyed with its sloooow pace, it’s impossible not to want to know what happens next. It has that Lost-like addicting quality. Ugh!

10. It’s utterly ridiculous sometimes. Think about it! For a wimpy guy, Glenn does a lot of grunt work, Andrea has questionable morals, but don’t even get us started on Lori (fortunately, they are both dead). Rick runs a "Ricktatorship" and then suffers from hallucinations, and the black guys still get the shortest sticks! It’s nuts!

Click on to the next page for a quick summary of each season! 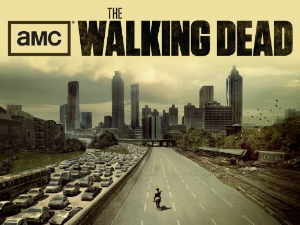 Rick Grimes gets introduced as a main character, wakes up to the aftermath of a zombie outbreak, meets exposition characters who tell him what has happened (and also that the term for zombies in this show is "walkers"), wears spiffy Sheriff’s Deputy costume, and sets out to look for his family. Unbeknownst to him, his wife Lori has hooked up with his best friend Shane Walsh but in her defense, she thought she was a widow.

On his way to find his wife, he is saved by an Asian pizza delivery boy named Glenn and the two of them establish a curt bromance. They hole up in a department store where they meet a racist named Merle Dixon, whom they leave tied to a pipe on a roof because who wants to hang out with a douche? (Unfortuantely, Merle saws his arm off and gets away.) The group (henceforth called The Group) head back to a camp site, where Rick Grimes reunites with his family-much to the dismay of Shane.

The main characters meet some thugs, more human conflict (seriously, the humans are worse than zombies) but that gets resolved because the thugs are really kind-hearted do-gooders who care for the elderly. The Group’s van is stolen by Merle (outstanding, because he only has one arm!) and the team is attacked by walkers. Minor characters die and live and die again, sisters Andrea and Amy have a notably sad moment.

The team finally make it to the Center for Disease Control and Prevention (CDC) where we learn a few things about the infection-mainly that the French researchers probably know more than the Americans do but they’re probably dead. Science-y things are introduced but the show focuses on the characters’ will to live.

Season ends with the CDC exploding, but not before a secret is whispered into Rick Grimes’ ear. 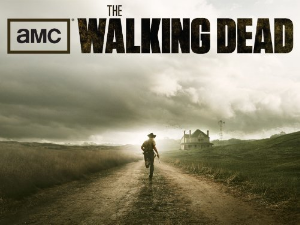 Season 2 started with the news that the writing staff has been replaced. This is evident, as the second season requires a lot of patience to sit through because it is slow. Slooooow.

Carol’s daughter, Sophia, runs off into the woods because of a walker attack. Another kid, Carl (Rick Grimes’ son), is accidentally shot. Rick Grimes’ wife Lori is pregnant. Lots of kid-related plot points in this season.

The Group moves into a farm owned by the Greenes. Asian pizza delivery boy Glenn cozies up to farm girl Maggie Greene and becomes increasingly badass as the season progresses. They discover that the farm is infested with walkers and that Sophia is now one of them. Rick shoots the girl and her mother weeps.

Bonds are tested, Shane’s jealousy of Rick gets the better of him and he starts acting like a douche. All the human drama causes the once isolated farm to be exposed to more walkers, The Group struggles to stay united, ends up having to burn the farm. The Greenes become part of The Group, Andrea gets separated from them but is rescued by a person with a sword (identity revealed in the next season).

The secret from Season 1 is revealed by Rick Grimes: everyone is infected with the, er, walker virus! Season ends with a large prison in the horizon. 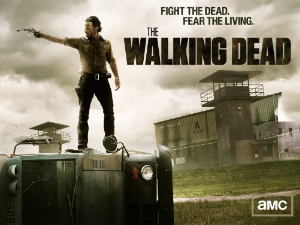 The prison at the end of Season 2 turns out to be a potential town for survivors. The third season introduces three new notable characters: The Governor (people hate him), Michonne (girl with a sword who rescues Andrea), and Tyreese (he’s a good guy, people like him).  Rick now hates his pregnant wife, who eventually dies after giving birth...turns into a walker and is then shot by her son. Drama, right?

Andrea and Michonne are introduced to The Governor, who keeps preserved walker heads in a fish tank for who knows what reason. Michonne distrusts the place, Andrea likes it until she sees people using walkers for entertainment (not sexual, don’t worry) but stays on because The Governor is nice to her. He is so nice that they have an affair but in the end, they each plot to kill the other. Parallel to this, Michonne teams up with Rick Grimes and his group to, well, survive.

The season ends with Andrea killing herself and The Group stays in the prison-town while The Governor and his henchmen are at large.

Tune in on Fox Pilipinas to catch Season 4 every Saturday at 8:55 p.m.

Walking Dead. Fake It Like You Know It Zombies Walkers Amc Tv Synopsis Showguide Guide Summary
Your Guide to Thriving in This Strange New World
Staying
In? What to watch, what to eat, and where to shop from home
OR
Heading
Out? What you need to know to stay safe when heading out