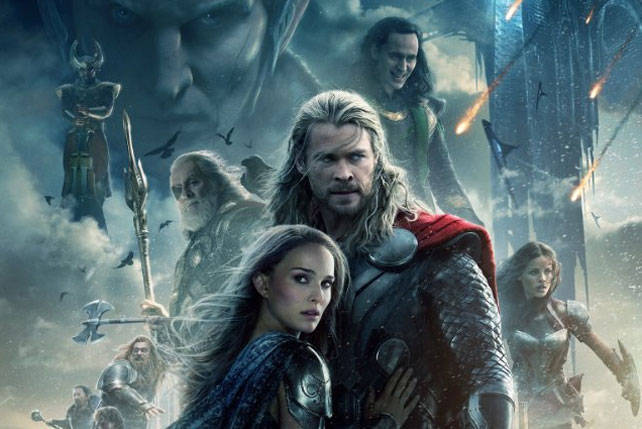 (SPOT.ph) Every few centuries, the Nine Realms that make up the universe align, and portals between them are opened. The Dark Elves, an ancient race thought to have been vanquished, have returned for this alignment. Their leader, Malekith, plans to unleash the destructive force known as the Aether and restore the universe to its primal state of darkness. With the help of astrophysicist Jane Foster and the treacherous god Loki, Thor, the mythical Norse god of thunder, must defeat Malekith, destroy the Aether, and save the universe!

With Thor: The Dark World, Marvel Studios once again demonstrates their mastery of how to make a movie based on a comic book, that will appeal to a wide audience and not just a hardcore group of fans.

Chris Hemsworth as Thor radiates power. I enjoyed his performance more here where he's the focus, than in The Avengers where he was sharing-or fighting for-the spotlight. Tom Hiddleston as Loki is still slick but not slimy. He takes the backseat to the main villain this time, and unites with Thor against this common enemy. The bickering brothers make for reluctant allies but a great pairing of the two actors.

Natalie Portman as Jane Foster is dazzling. Even when her eyes are blacked out, or she's just eating cereal. She shows her range, from funny to serious, confident to vulnerable. 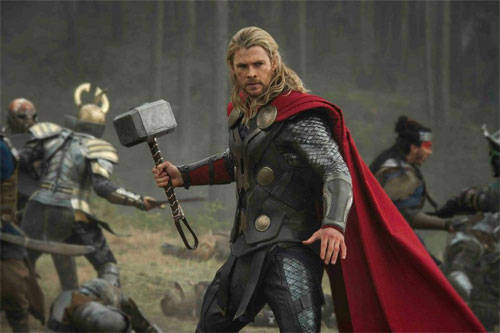 Christopher Eccleston adds another notch to his villain belt as Malekith. While he is sufficiently malevolent, I was left wanting. Although I suppose such is the role of the villain-to threaten but ultimately be defeated.

Rene Russo as Frigga gets a fight scene, a sword fight scene even, catching Malekith by surprise. Anthony Hopkins as Odin has the best lines and delivers them with gravitas. I especially liked his exchange with Thor at the end and I wish we could have soaked up more of that, but I understand that the genre dictates a certain pace.

Director Alan Taylor does an excellent job of maintaining the balance between "loud" and "soft" moments. The mourning scene is moving, and a welcome respite at that point. The love triangle is glimpsed then it's gone, tantalizing the way unrequited love should.

I felt the flow of the final battle was disrupted too often. It didn't help that a couple of the disruptions were comedy scenes. Nevertheless, I was very pleased that there is much humor throughout the film, and not all of it in the dialogue so keep your eyes and your ears peeled. There's one instance as Thor enters Jane's house that he's faced with a situation that we humans don't stop to think about but it takes him a moment.

The casting of Chris O'Dowd was perfect. There are several cameos, including the obligatory Stan Lee as himself, and I mean that in the most affectionate way. 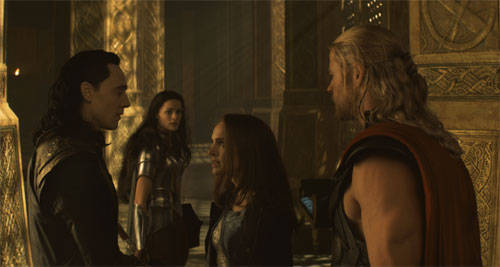 A good number of audience members stayed behind for the ending credits scene, knowing to expect one in a Marvel movie. But it was just me, my friend, and a small group of girls, who stayed behind for another one after the ending credits. The first is for the hardcore comic book fans with all the introductions and hints and whatnot, and leads in to a movie in 2014. The second is for everybody else but especially the ladies, and gives you a little something-something to tide you over until the next installment. Don't think we won't hear all y'all coughing and inhaling at Thor's topless scene.

A big shout out to Wendy Partridge for the beautiful and incredibly detailed costume designs. Watch out for the torc inscribed with runes around Loki's neck when he's presented to Odin for sentencing. Wendy also worked on Hellboy and the Underworld films.

The concept of "magic is just science that we haven't figured out yet" was in the first Thor movie; depicting the rainbow Bifrost Bridge as an inter-dimensional transporter of sorts for example. This is built upon in the second movie by depicting military and medical technology that's so highly advanced that it would seem like magic to us regular folk. Indeed, Jane recognizes one of the diagnostic tools on Asgard as a quantum field generator. This concept is hardly new. Presently championed by Giorgio Tsoukalos of Ancient Aliens, it was popularized in the late 1960s by author Erich von Däniken and...original Thor comic book artist Jack Kirby. Though never before has it been depicted so vividly and breathtakingly and on the big screen.

It's a proven formula: talented actors, stunning visuals, plenty of action, with just the right amount of comedy, drama and romance. Regardless of whether or not you read comic books, Thor: The Dark World is thoroughly entertaining.

Thanks to Jollibee for inviting SPOT.ph to their screening of Thor: The Dark World

Thor Thor2 Superhero Moviereview Chrishemsworth Tomhiddleston Natalieportman Comics
Your Guide to Thriving in This Strange New World
Staying
In? What to watch, what to eat, and where to shop from home
OR
Heading
Out? What you need to know to stay safe when heading out