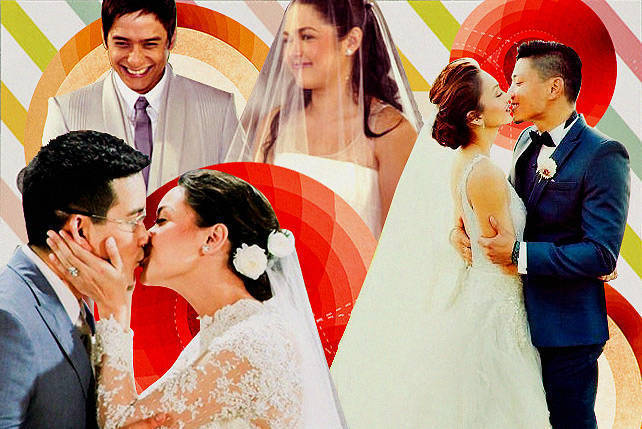 These wedding films made us swoon. 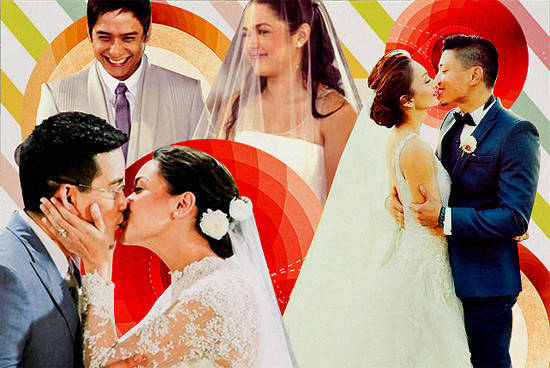 (SPOT.ph) Social media went crazy over the weekend after learning about Iya Villania and Drew Arellano’s super stealthy matrimony. Jason Magbanua released the same-day edit (SDE) video yesterday, February 4, and, if the comments on the videographer’s Facebook page are to be believed, everyone swooned and cheered for the couple who’ve been dating nine years prior to getting hitched. Watching their gorgeous vows ignited our inner wedding crazy. So, we’ve listed 10 celebrity wedding videos that might curb our excitement in the meantime.

In the spirit of love month, these top 10 celebrity wedding videos will make you happy, cry, and kilig simultaneously. It wasn’t a matter of which wedding was the best (really, who can decide that?), but these SDEs are the ones that made us feel like we’re part of the celebrations-and we can watch them over and over again, every time with a fresh box of tissues.

Threelogy is saved on this one because it doesn't take creative angles to make Bellarocca-and, in turn, their video-picturesque. In fact, the whole thing looks like a postcard, including the wedding which was held outdoors and under a tree.

Must-see bit: The beautiful landscape. There's also a bit of airtime spent on Heart Evangelista (who was then the girlfriend of Vanessa's brother, Daniel).

The longtime couple tied the knot three years ago in a simple but star-studded affair. The two opted for a classic look, but with little touches of rock and roll-a black sash around her waist and a red-and-black color scheme.

There’s one scene of the couple kissing with the veil covering them as it billows in the wind. It’s simple shots like these that give it an extra romantic touch. We also love how Mayad inserted filtered shots to create contrast, as well as their seamless shifts in music that go from tear-jerking to quirky. They used "White Dress" and "Moving Backwards," both by Ben Rector, and "You and I" by Wilco. Their capture of Vargas' heartfelt yet hilarious vows was also priceless.

Must-see bit: A snippet of Eugene Domingo and John Lapus yelling "Here comes the bride!"-a reference to their hit film of the same title.

Let's forget for a moment how strange it is to have a real video for a fake wedding, and instead focus on the efforts ABS-CBN went through to make things seem authentic, including hiring leading videographer Jason Magbanua to work his magic on the documentation.

This wedding is bigger than most real ones, but then again, hundreds of thousands of people have let Sir Chief and Maya’s love story into their homes. The style is different from what we're accustomed to with other Jason Magbanua works, but he doesn't fail to capture the sweet touches that make this wedding believable: the teary-eyed vows, the preps, the guests excited for the bride to come out. He even has a clip of Maya reading a message from Sir Chief pre-wedding. That's real stuff!

Must-see bit: Maya's choked-up vows which almost made us believe this was a real wedding. Oh, Aiza Seguerra also has a best-actress-worthy scene where she breaks down in tears.

It’s interesting to see this private couple in a different light, with suave Iya and hilarious/hunky Drew tearing up as they professed their love for one another in front of their closest family and friends. Jason Magbanua really tried to show the 10 years of history that the two have endured as a couple in the way he pieced together the vows, the speeches, and the quirks in the pair’s behavior that you can only see in a long-standing relationship.

Must-see bit: Iya hitting Drew on the head. The details that they kepts under wraps for a year. Hands seem perpetually clasped together.

This video is looong. Like a really long wedding SDE or a capsule romantic comedy. It has scenes that will have you hooting one second and awww-ing the next. Patty's sense of humor (who else would quote Dr. Seuss at a wedding?) and Patrick's sincere affections radiate through the camera lens and into our computer monitors. They even did that bit where they hold hands and exchange letters without seeing each other before the wedding. Just real, real love.

The Pats have an even longer video using shots by Mayad and put together by Patrick's production company.

5. Paolo Bugia and Nikki Syyap
Videographer: For You Are Mine
Venue: Sanctuario de San Antonio and Rockwell Tent

A bit of goof can go a long way. Cager Paolo Bugia wed his longtime girlfriend Nikki Syyap in humorous fashion-if you take what he says in the video seriously. The video, crafted by Jason Magbanua's second team (and edited by Magbanua himself), infused pre-wedding elements including Paolo annotating the five-minuter and the pair reenacting their days as a young couple. We love how a sense of humor can play its part in making the video even more relatable and heart-wrenching.

Drama and rock and roll-always a good mix, especially when you want to make an impact. The rapid pace and the war-like music give viewers a different perspective to what this couple is getting ready for. Nope, marriage isn’t always about being lovey-dovey. It’s a little like a battle, actually. Celebrity videographer Mervin Gobaco cleanly puts together powerful imagery with even more powerful sounds to create this heart-thumping masterpiece.