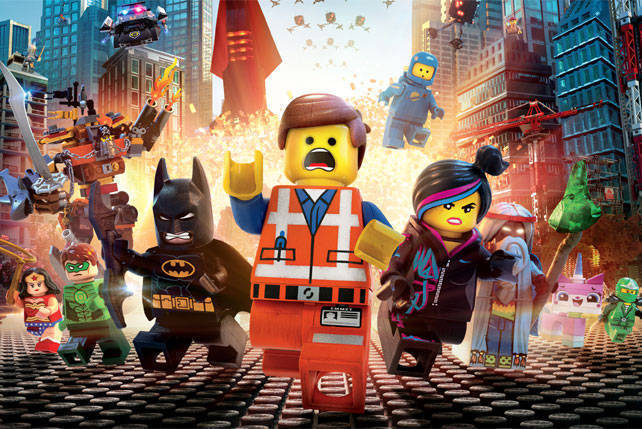 SPOT.ph blogger Paul Daza on why this movie will probably make your wallet quite a lot thinner, even after you’ve seen it.

STORY: Emmet (voice of Chris Pratt) is an ordinary LEGO minifigure, a thumb-sized construction worker content with his daily routine in the "everything is awesome" Legopolis he calls home. A chance meeting with action babe Wyldstyle (Elizabeth Banks), however, turns his life upside down. She's convinced that Emmet is "The Special" who's destined to save the world from the evil Lord Business (Will Ferrell). Soon, Emmet's hopping from one LEGO universe to another, teaming up with superheroes, pirates, spacemen, and other fantastic creatures in a frantic bid to save the universe.

The "retro" visual effects. It's wonderfully apparent that the filmmakers didn't want to see anything in their opus that couldn't exist as a LEGO object in the real world. When Emmet and friends are threatened by giant waves, flames, bullets and lasers, it's clear that those threats aren't meant to showcase the latest in computer-animated wizardry, but rather, the simple objects you'd find in any LEGO kit. And so, when fire, water, and laser bolts engulf the good guys, you'll be gobsmacked to see that all those non-solid things are made up of thousands of solid LEGO pieces, meticulously animated at 24 frames per second to look organic. In keeping with the old-fashioned look of stop-motion animation, all movement also has the jarring, staccato rhythm of Ray Harryhausen's monster movies, the retro charm that all but vanished when computers were taught how to add motion blurs to the animation of inanimate objects. 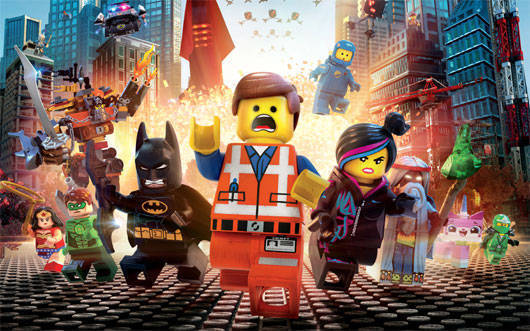 The once-in-a-lifetime "plastic" cast. Can any other movie out there claim to have a roster that includes Superman, Batman, Abraham Lincoln, Gandalf, Dumbledore, C3PO, and many other pop culture favorites? So densely packed with personalities is The LEGO Movie that you'll need more than one viewing to see everybody. And the voice talent isn't anything to sneeze at either. As the blind mystic who speaks of the prophecy that Emmet's destined to fulfill, Morgan Freeman hasn't been this funny and this much fun since he was Easy Reader on The Electric Company. Ditto for the previously perpetually serious Liam Neeson, whose schizophrenic good cop/bad cop is nearly as hilarious as Freeman's Vitruvius. And though Channing Tatum's Superman and Jonah Hill's Green Lantern only get to speak a few lines, there's no sense that those actors are underutilized because there are so many other darn characters who have lots to say and do to provide wall-to-wall amusement.

The eye-gouging locations. As Emmet tries to save his world, he's whisked from one realm to another, each one more spectacularly intricate than the last. We're transported from Emmet's  New York-like city to the Old West, Middle Zealand, Cloud Cuckoo, the depths of the ocean and so much more. 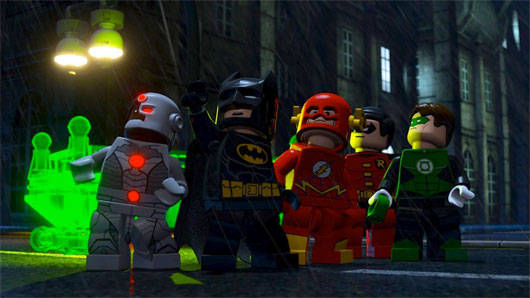 The inventive and affecting story. Colorful characters, laugh-a-minute gags, irreverent dialogue and genre-bending plot twists cast a magic narrative spell that's sure to tickle and touch anyone who has ever succumbed to the joy of creating anything and everything from LEGO blocks.

The breathless editing and the missing trailer music. At 101 minutes, The LEGO Movie is 10 minutes longer than your usual 90-minute animated feature. And yet, there are a couple of instances where some shots would have been even more effective had they been held a little longer onscreen rather than trimmed to within a split-second of their exposure. For instance, I remember giggling every time  I saw Wonder Woman's invisible jet gag in the trailer. But when the same joke played out in the movie, I didn't find it as funny. Could it be that the editor was so keen to keep the film as short as possible, he didn't or couldn't give us an extra second or two of laughing room? Another reason why this gag works better in the trailer is because it's accompanied there by a delightful techno version of A-ha's 1985 chart-topper, "Take On Me." Sadly, this retro riff isn't heard anywhere in the movie.

It'll cost you even more when it's over. I felt so much affection for everything LEGO because of The LEGO Movie, I wanted to head straight for the nearest toy store to buy a Lego set or two after watching the film. But since I didn't have enough cash, I settled for one of those gorgeous Happy Meal lenticular cups. Such is the effect of The LEGO Movie: it'll fill you up with heaps of love for those colored blocks, but empty your wallet just as quickly if you're not careful.

IN BRIEF: To paraphrase the anthem that Emmet and his co-workers sing every day, everything in The LEGO Movie really is awesome. Brimming with comedy, adventure, excitement, romance, imagination, and visual razzle dazzle, this is the most joyful animated tale about play things and playing since the first Toy Story.

Movie Review Lego Liamneeson Morganfreeman Jonahhill Channingtatum
Your Guide to Thriving in This Strange New World
Staying
In? What to watch, what to eat, and where to shop from home
OR
Heading
Out? What you need to know to stay safe when heading out