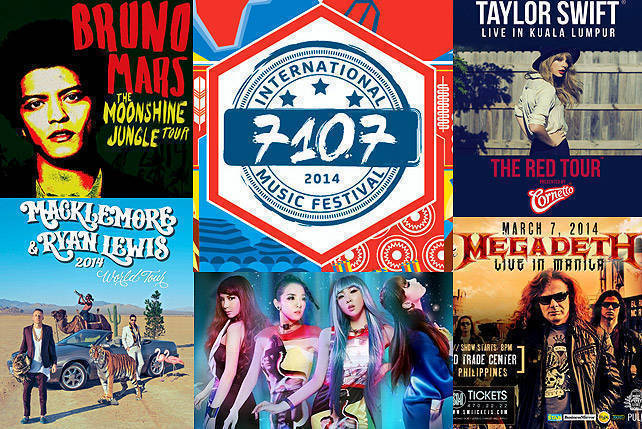 From indie to rock to Asian pop, there’s a show to suit your musical taste, whatever it may be. 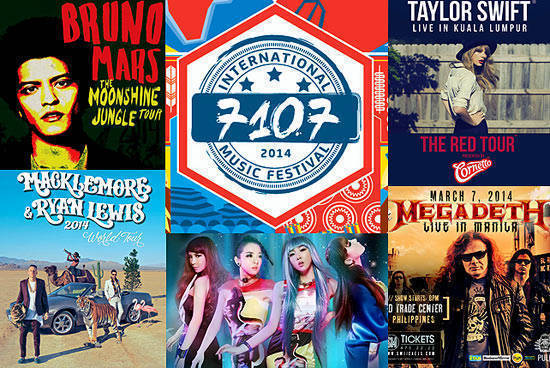 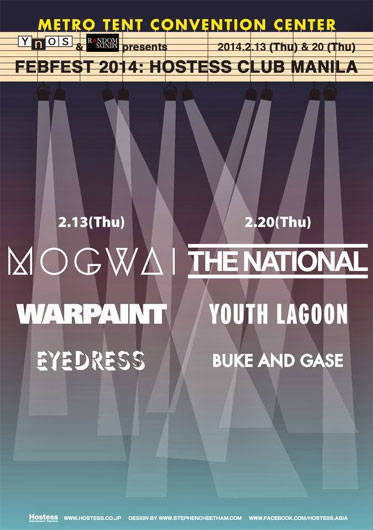 The National, Youth Lagoon, Buke and Gase at Febfest 2014

Indie rock acts The National, Youth Lagoon, and Buke and Gase will perform their dark, distinctive tunes to an audience that is sure to be composed of vinyl-loving fans with an appreciation for experimental music and ukuleles. 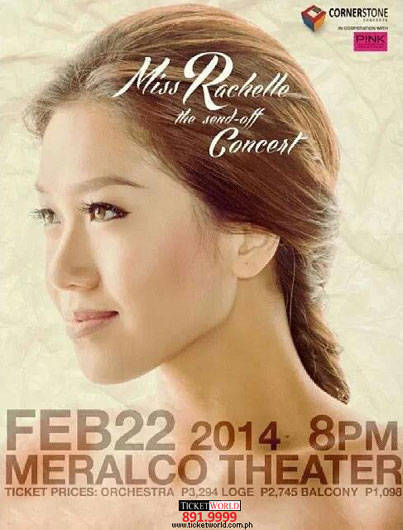 Before she flies to London to start rehearsing for her role as Gigi in Miss Saigon, Rachelle Ann Go is serenading her supporters for one last time before her one-year hiatus from the local mainstream scene. She assured fans that this gig is just temporary, but we're hopeful that our homegrown talent will earn more blue feathers in the international scene. 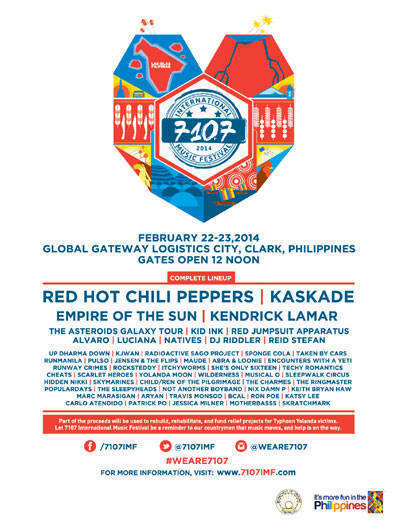 We reckon the Red Hot Chili Peppers is the reason why the price tag for this two-day music festival reached an exorbitant amount. Now that the VIP passes are sold out, you're left with the general admission tickets and one-day passes. Aside from the "Californication" hit makers, there are plenty of acts to wear flower crowns for: EDM pop kids Kaskade and Empire of the Sun, hip-hopper Kendrick Lamar, indie acts from different parts of the globe, plus our own roster of Pinoy bands and local deejays. Check out the poster for a full list. 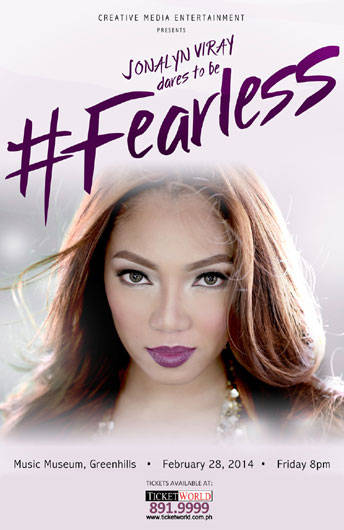 Jonalyn Viray Dares to be #Fearless

After more than three years, the GMA trio La Diva has disbanded, leaving all three members embarking on different career paths. With former members Aicelle Santos top-billing the musical Rak of Aegis and Maricris Garcia doing soap operas, Jonalyn has chosen to focus on her singing career. Her upcoming concert (yes, the hashtag is intentional) highlights Jonalyn as a solo act, especially since she's been tagged as the birit queen of the now defunct La Diva. 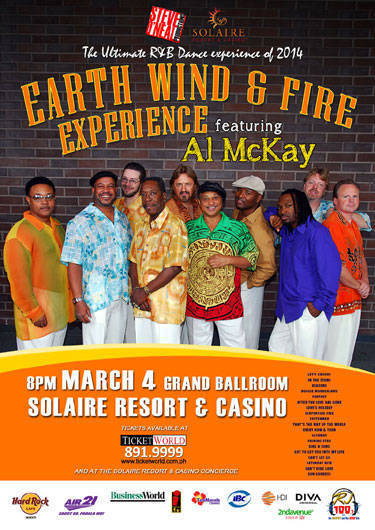 Long before EDM, long before Notorious B.I.G. rapped through the mid-'90s, and long before Madonna was still a virgin, the music of the '60s and '70s was a mix of R&B, funk, jazz, and soul. Earth, Wind and Fire gave us classic hits of that era, such as "Let's Groove," "September," "Boogie Wonderland," and "After the Love is Gone." Oh, but don't be fooled by the concert poster; the only EWF member who's actually coming to Manila is Al McKay. Maybe one of his backup singers could sing Philip Bailey's famous falsetto line: "Ba de ya, say do you remember..." 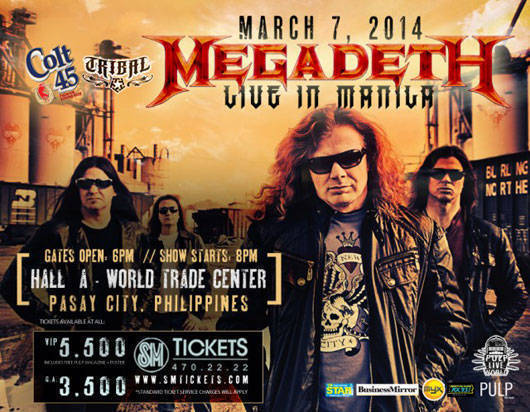 For Megadeth fans, there is no literal Countdown to Extinction as the American band continues to bring their thrash metal sound around the globe. Get ready to head bang to their 13th album, Super Collider, plus other smash (pun intended) hits from decades past. 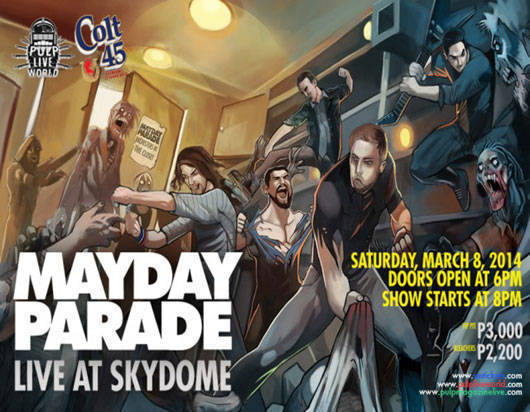 The boys will be busy touring around globe from the Netherlands to Asia. Their final Asian stopover is Manila before heading back to the US for local performances. Derek Sanders has just announced to his Pinoy fans that his band, Mayday Parade, can't wait to perform tracks from their latest album, Monsters in the Closet. 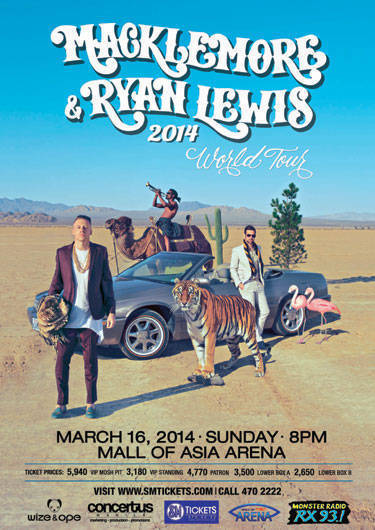 "That white dude from Seattle," Macklemore, and his DJ/producer Ryan Lewis, took home three awards from this year's Grammys-best rap performance for "Thrift Shop," best rap song, best rap album for "The Heist," and best new artist. For a duo that even Eminem can't stop raving about, their Manila concert ticket prices are a steal. 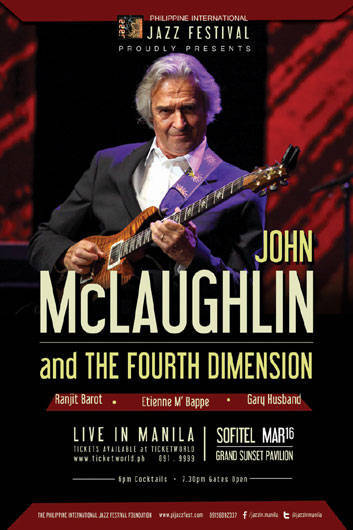 John McLaughlin and The 4th Dimension

Top-billing the Philippine Jazz Festival is English musician John McLaughlin, who will be serenading the Sofitel crowd this signature fusion of jazz and classic rock. Don't underestimate the 72-year-old; he made it to the list of Rolling Stone's "100 Greatest Guitarists of All Time," paving the way for the likes of Carlos Santana and Eric Clapton, both of whom McLaughlin has collaborated with. 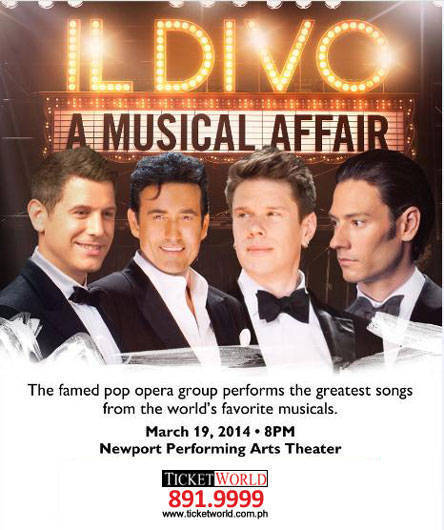 Can you believe it's been 10 years since this pop-opera quartet was founded by Simon Cowell? No wonder they're looking a bit more mature than their Josh Groban-esque years. But David, Carlos, Urs and Sebastien are still sizzling hot underneath those suits-plus points for reaching operatic notes that The Wanted can never hit. Find the ticket prices too steep? Well, they can sing in Spanish, French, English, Italian, and Latin, and hobnobbing world of classical music has dubbed them as our generation's The Three Tenors. For their Manila show, they promise you won't feel left out as they belt out tracks from the world's best musicals. 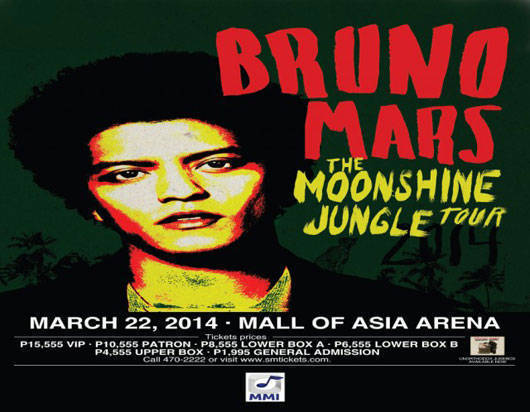 Bruno is one busy fellow. As if his Super Bowl performance wasn't enough to make headlines, the "Grenade" singer is prepping for his Australian/ New Zealand tour in March, after which he'll head straight to Asia, where Manila is his second stop. We all know that Bruno is part Filipino, so it's good to hear that he's helping out the victims of typhoon Haiyan by donating a portion of his ticket sales to our relief funds. 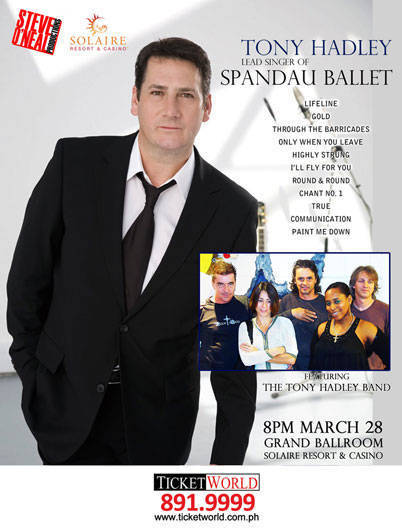 The British band may have disbanded ages ago, but their hits such as "True" and "Gold" are still as popular as they were in the '80s. Take a stroll down memory lane with the original lead singer Tony Hadley and his new posse, The Tony Hadley Band, as they sing Spandau Ballet's hits from decades past. 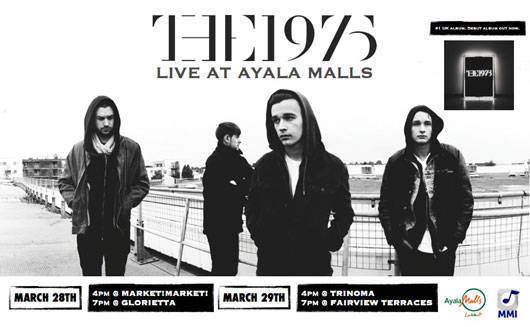 When and where: March 28 at Market! Market! and Glorietta, and March 29 at TriNoMa Mall and Fairview Terraces

The indie rock group from Manchester, England is mall hopping in Manila this March. Did we mention that it's free? Ayala Malls has yet to announce if you need to join a contest or make certain purchases at their malls to get tickets to The 1975's shows, so we suggest you subscribe to mmilive.com for updates.

He may not be from the Taiwan Pop or K-Pop generation, but the 43-year-old Malaysian Chinese singer/actor still makes music videos that tackle teenage and 20-something sentiments. Fans can get a chance to watch Michael Wong perform ballads from his latest album, Crazy Memories, with guest artist Maggie Chiang. Subtitles needed. 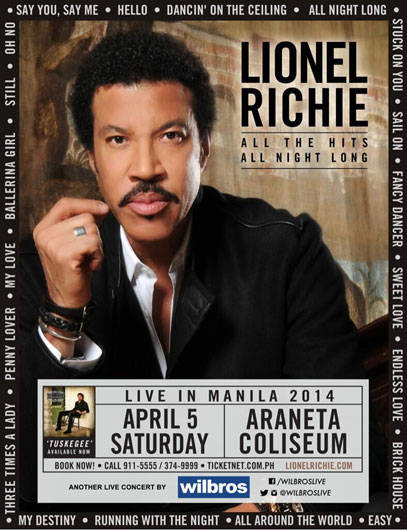 When: April 5
Where: Araneta Coliseum
Ticket prices: To be announced

He's still sporting that '80s mustache, but Lionel's fans haven't gotten over his hits, either. Head over to the Big Dome to listen (and maybe even sing along) to his ballads that are so classic that they're still being requested on the radio and videoke bars, such as "Endless Love," "All Night Long," "Three Times a Lady," and "Hello."

The California-based band rocked through the 1990s, and this year they’re back in Manila with their own brand of upbeat feel-good songs that are sure to transport anyone over 30 back to their heyday.

Jars of Clay and Gungor

To start the Holy Week, Church Simplified has invited Jars of Clay and Gungor to perform on Palm Sunday, the same day that their exhibit, "Walkway: Reflections on the Stations of the Cross," opens to the public. Both bands are promoting their latest albums-Jars of Clay's Inland and Gungor's I Am Mountain. 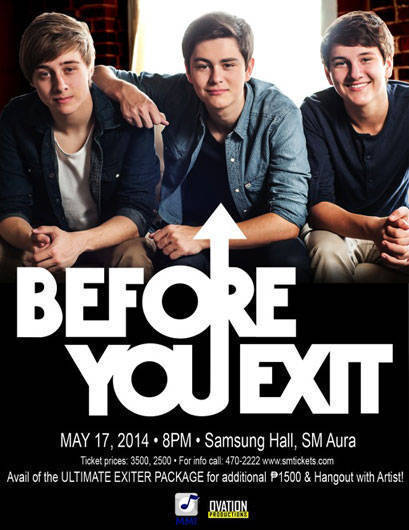 Now that The Jonas Brothers, Justin Bieber, and One Direction are in their '20s, Before You Exit is ready to steal the hearts of tweens and teens worldwide. They've evolved from covering Billboard hits to creating catchy pop tunes of their own. If your little sister or daughter is looking for that ultimate summer concert, this is the ticket to purchase. For an additional payment of P1,500, the ticketholder can meet and greet the boys. 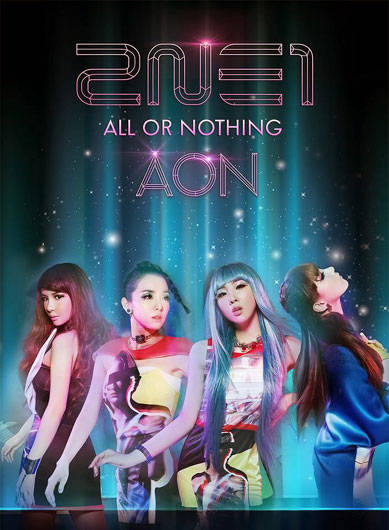 2NE1: All or Nothing

When: May 17
Where: Mall of Asia Arena, Pasay City
Ticket prices: To be announced

Sandara Park (also known as Dara) excitedly tweeted that 2NE1 is stopping by Manila for their "All or Nothing" world tour. A friendly reminder: the Philippine showbiz industry was responsible for Sandara's career downfall that led her to return to Korea, get up on her own two feet, and work hard to become the fourth member of the global K-Pop phenomenon. We're actually relieved she escaped her "In or Out" days in Manila and blossomed into 2NE1's "goddess." 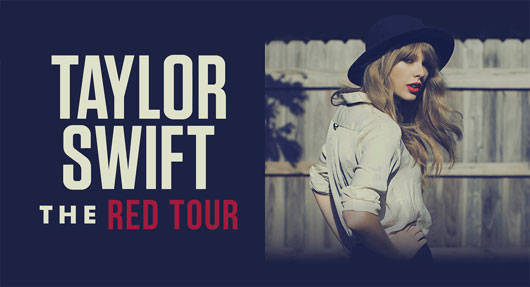 When: June 6
Where: SM Mall of Asia Arena
Ticket prices to be announced

Seven-time Grammy award winner Taylor Swift just added new dates to The RED Tour which will bring her to Southeast Asia in June. Known for her elaborate shows and irresistibly singable tunes, we won’t be surprised if this sells out quickly.