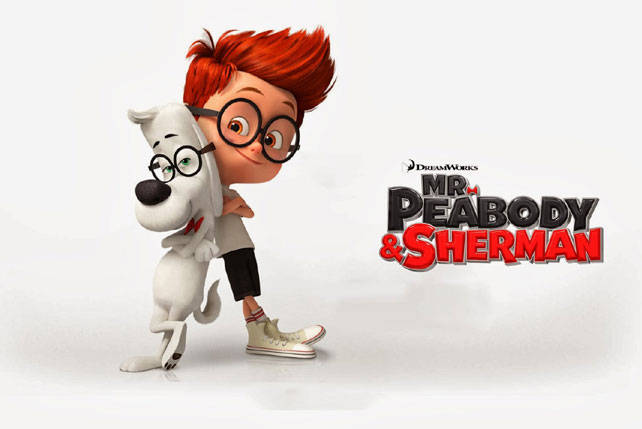 A middling feature film that aspires to be entertaining but comes off as a clone of other animated films.

(SPOT.ph) Mr. Peabody and Sherman is, sadly, a movie that no one was really asking for. One of the advantages of drawing up already existing properties is that filmmakers can rely on prospective viewers' nostalgia. Think of the way people swarmed to Transformers. But the Hanna Barbera franchises seem to have much less nostalgia. The Flintstones, Rocky and Bullwinkle, Scooby Doo are such franchises that have been greeted with varying success. And from their pool has also come the disaster that was the Yogi Bear adaptation.

The question then is, did Mr. Peabody and Sherman, as characters, really need a feature film? Is there a base of fans who feel that these characters need a movie about them? Or is there something in contemporary times that suddenly makes these characters interesting and relevant? Because none of these answers could be given a conclusive yes, it seems that the filmmakers were fumbling for a reason for this movie to exist. The movie isn't about much really, and it's a jumble of ideas without any real movement. It's a middling feature film that aspires to be entertaining but comes off as a clone of other animated films. 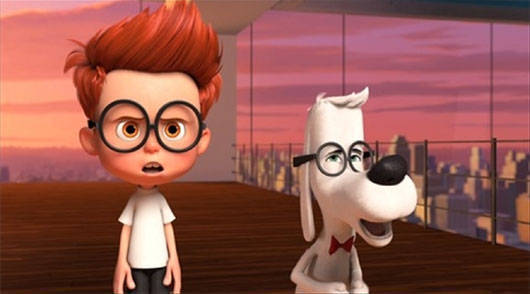 Mr. Peabody, genius dog, with his biggest project, the boy (Sherman) he endeavors to raise.

Mr. Peabody is a dog who is a genius. He's an inventor and he's kind of a superhero who can do pretty much anything because he's so smart. From culinary exhibitions to fencing mastery to passing through wormholes, he can pretty much do anything. He embarks on the most challenging thing, he decides to raise a boy, Sherman. Sherman mostly plays sidekick and is the person who always does the wrong thing, which has Peabody scrambling to make things right. This is the film's general formula-dump the characters into someplace and have Peabody make up for Sherman's goofing.

Sherman goes to school and becomes the target of bullying. He winds up biting his bully, Penny. This draws the attention of child services and so Peabody has to prove that he is fit to be a parent. Yeah, that sounds crazy. But then very little of this movie makes sense.

In an attempt to appease Penny's parents, Peabody invites them over. While Peabody regales Penny's parents, Sherman makes the mistake of showing Penny the Way Back Machine. This sets off a series of set pieces where Peabody, Sherman, and Penny have to be in different time periods as they try to get back.

The film has its interesting and funny sequences. Having that time machine allows for a lot of fun ideas, and these are shown in the montages. But when there have to be scenes that are strung together it falls apart. It just seems incapable of building any dramatic tension. 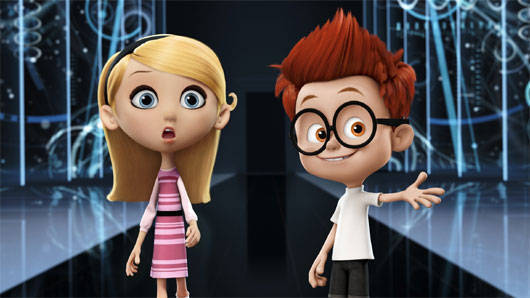 Perhaps the problem with the dramatic tension is that it is anchored on two very problematic themes. This is where this moviegoer found himself disagreeing with the movie most. First is the tension between Peabody and Sherman. One of the arcs here is that Peabody is overprotective and he has to learn that Sherman can think of himself. But the kid is like, seven. I mean, I understand the need to allow kids to think for themselves. But here Penny goads Sherman into all kinds of bad behavior under the pretense that he has to learn to be his own person.

The other big problem is the Sherman and Penny relationship. So much of this movie revolves around the way that those two characters develop together. They begin as enemies, with Penny being the mean girl bully. She behaves badly, acts spoiled, and does whatever she wants. Never is she reprimanded, and it's a rare moment when she actually has to deal with any consequences. The two characters develop romantically. Again, these are two seven year olds and we are supposed to care for their romantic arc. And that romantic arc is supposed to fuel our emotional connection with them and how the story turns out. 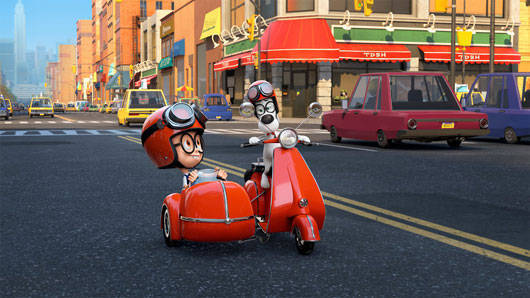 The film feels very confused. Though the themes explored don't seem appropriate to the age of the characters, they have been very successfully dealt with in other animated films, and that's where the bigger problem lies. Mr. Peabody and Sherman attempts to replicate what was successful in other animated films. It has the big set pieces. It has attempts at humor (but so many of the jokes here are toneless or fall flat). It's very kinetic. It has lots of visuals. It attempts at big emotional moments. But if you've seen enough animated movies, all of this already looks tired and rote. There's nothing about this film that makes it distinct, nothing that is unique about it.

Mr. Peabody And Sherman Dreamworks
Your Guide to Thriving in This Strange New World
Staying
In? What to watch, what to eat, and where to shop from home
OR
Heading
Out? What you need to know to stay safe when heading out