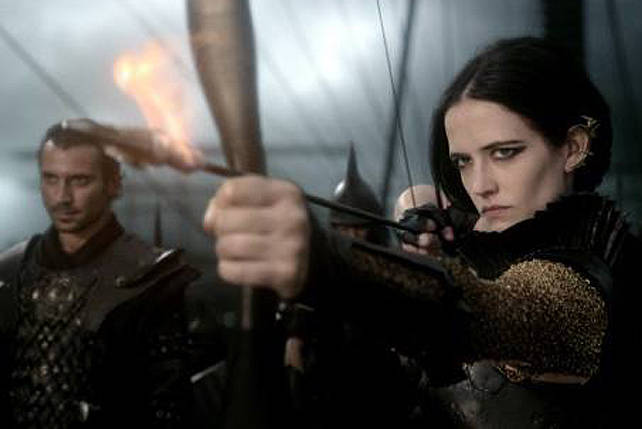 STORY: Greece, 480 B.C. The Persians have decided to invade the Greek city states on two fronts-by land and sea. The tragic outcome of the land invasion, which saw 300 Spartans led by King Leonidas (Gerard Butler, seen in flashbacks) massacred by hordes  of Persians, was chronicled in the game-changing 300, released in 2007. 300: Rise of an Empire is more a companion piece than a sequel to 300. It shows how the Greeks, led by Themistokles (Sullivan Stapleton), defended themselves from the Persian navy around the same time Leonidas and his men were making their valiant stand against Xerxes (Rodrigo Santoro) and his army in Thermopylae. Leading Persia's naval assault is the vengeful warrior queen Artemisia (Eva Green), who has a very personal score to settle with Themistokles as a result of a death that bound their fates together years ago.

The "see-worthy" sea battles. Visually, 300: Rise of an Empire looks a lot like its graphically stylized, blood-splattered predecessor: there are poetic shots of golden-hued skyscapes and windswept wheat fields galore, and, of course, tons of speed-ramped, slow-motion blood spurting from beefy men. What gives Rise of an Empire more visual variety are the maritime battles depicting how the opposing forces used their ships and men to outsmart, outmaneuver, and outlast one another in the angry Aegean sea. In two epic confrontations, the Persians and Athenians utilize common sense, hammer throwers, fog and hidden oil reserves to deadly effect, smothering their foes above the water and relying on nightmarish monsters under the sea to kill the rest. Making it all even more impactful is the superb use of stereoscopic 3-D that's even more eye-filling when experienced in IMAX. 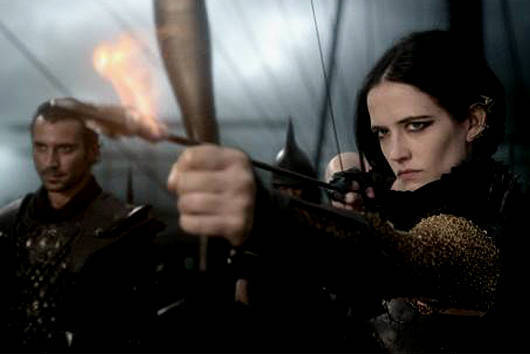 Eva Green devours her role. If you thought the larger-than-life man-god Xerxes was frightening in 300, wait till you get a load of his unhinged adviser, Artemisia. As portrayed by Casino Royale Bond girl Eva Green (who played a witch in both The Golden Compass and Dark Shadows), Artemisia is now the scariest, most unforgettable female character I've seen in the swords-and-sandals genre. I daresay you'll find it impossible to forget what she does to the head of a decapitated man early in the movie. To paraphrase my favorite line from Wreck-It Ralph, the bloodlusting Artemisia is what you get when you have the mother of all Greek tragedies as your back story. 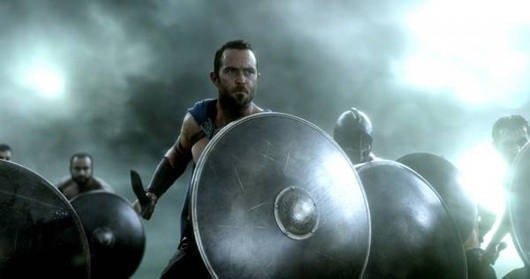 The blah/bland leading man. Though he's more conventionally handsome than Gerard Butler's Leonidas, Sullivan Stapleton's Themistokles doesn't have half the bellowing gravitas that Butler showed in 300. It's been seven years since I saw Zack Snyder's game-changing blockbuster smash, and I can vividly remember how Butler looked and sounded as the warrior king. It's only been a couple of days since I saw Rise of an Empire, but I can't recall anything about Stapleton's portrayal, not even his voice.

The confounding outcome of the first skirmish. Though it features state-of-the-art 3-D effects and is quite a spectacle to behold, I do have a nit to pick with the first maritime battle between the Greeks and Persians. As scripted by Zack Snyder and Kurt Johnstad, Themistokles' strategy to defeat the more numerous and better-equipped Persian ships is ingenious-it cunningly exploits a weakness in their design. When we viewers see how Themistokles puts the strategy into effect and destroys three Persian ships during their clash on the Aegean, we cheer the David and Goliath triumph of the Greeks. Later, however, as Artemisia is given the damage report, she's informed that more than 70 Persian ships were sunk in the skirmish. This begs the question: when the strategy of the Greeks became apparent to the Persians, why didn't they adopt a new course of action in dealing with the enemy? I get that the Persians could have been too stunned by Themistokles' plan to react the first couple of times their boats were sunk, but to allow it to happen to 70 more ships? Give us a break!

The silly, show-stopping dialogue. When used in a movie review, the word "show-stopping" is usually a compliment. That's not the case here, where the word is used to describe a silly moment during a battle sequence when it seems like the carnage is halted for a minute just so a pair of father-son warriors can have a dialogue exchange about lessons they learned from each other. 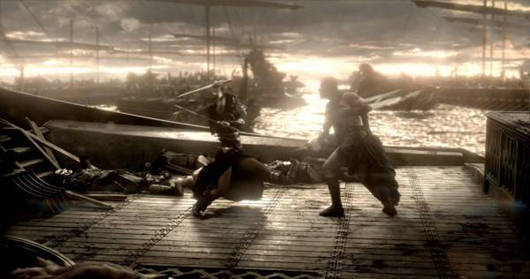 Sea skirmishes, bloody carnage gear up this companion piece to 300.

The cuts. 300: Rise of An Empire is rated R-16 by the MTRCB, but WITH CUTS. Oddly enough, there don't appear to have been deletions/cuts made in the gory, over-the-top shots showing heads being decapitated and blood being spilled in glorious 3-D from torsos and limbs as they're hacked off. The cuts are noticeable particularly in the scene where Artemesia tries to seduce Themistokles, and sadly, it's in this scene where the groundwork for what will become the film's most compelling subplot is laid (pun intended). Because of the deletions, this sexy subplot is neutered.

IN BRIEF: Though it's not as visually groundbreaking as the original300, Rise of an Empire's spectacular sea skirmishes and bloody carnage won't disappoint fans. And though Eva Green gives a deliciously villainous performance, a bland turn from leading man Sullivan Stapleton and a few despicable incisions made to their scenes together do the movie more harm than good.

300: Rise Of An Empire Eva Green Sullivan Stapleton
Your Guide to Thriving in This Strange New World
Staying
In? What to watch, what to eat, and where to shop from home
OR
Heading
Out? What you need to know to stay safe when heading out