Clever, complex, and comedic, these popular Disney foes deserve a little love too. 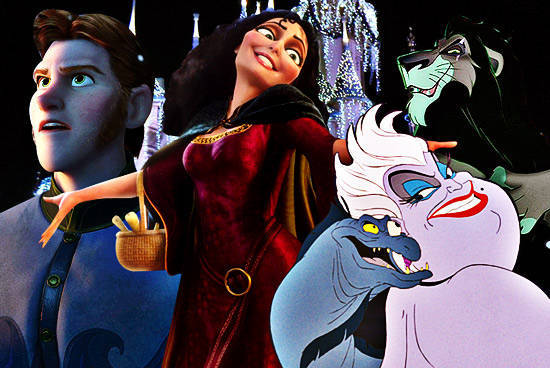 (SPOT.ph) Disney's Maleficent, starring Angelina Jolie in the titular role, hits theaters in May, and while we're excited to see The Mistress of All Evil come to life on the big screen, we'd love to see a few more of our favorite baddies get the same treatment. We picked 10 animated Disney villains who we think could provide some interesting live-action entertainment. Note: we only chose animated Disney (no Disney/Pixar ones) villains. 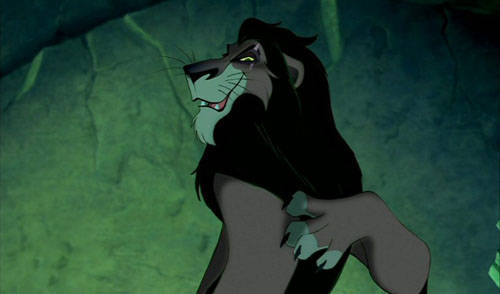 This would be a tad tricky to turn into a live-action film, so maybe Disney can bring back hand-drawn animation if they decide to give Scar the spotlight. Scar's background has actually been explored before in The Lion King novels. In A Tale of Two Brothers, we discover that Scar was once named Prince Taka and harbored resentment toward his brother at an early age, when their father, Ahadi, chose Mufasa as heir to the throne instead of Scar. Like the older Scar we've come to know, young Taka tricks his little brother (with the help of three familiar hyenas, of course). But the plan backfires on young Scar and he gets attacked by a water buffalo. This was when Taka got his scar and it seems the inferiority complex and nickname stuck.

Scar is one delightful villain to watch, though. Voiced by the supremely talented Jeremy Irons, Scar is manipulative and cunning like the true feline fiend he is. And who could forget the rousing musical number that is "Be Prepared"? We'd like to see Scar: The Teenage Years, carrying on his bitterness and his shenanigans with the equally entertaining hyenas, Shenzi, Benzai, and Ed. 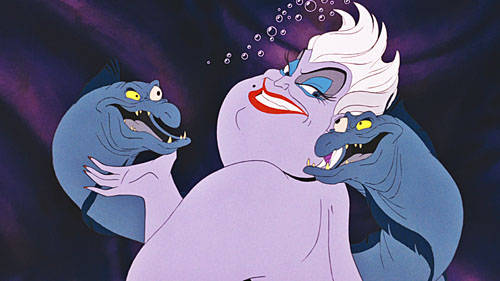 So, what is Ursula's deal? Why does she want to dethrone King Triton so much? How did she harness her magical powers? And what's up with turning mer-people into polyps (gross)? We do know this Cacaelia (a legendary hybrid of human and octopus) has a sister, Morgana, who appeared in the sequel to The Little Mermaid. Morgana, like all Disney siblings, resented her sister for being more favored by their mother. Manipulative mer-mom pitting her magical daughters against each other...There, Disney, we've got an idea for you. Now, let's see Ursula torture some more poor, unfortunate souls!

But who do you think could embody the ambitious Sea Witch? Disney actually picked Queen Latifah for their Disney Dream Portraits shot by Annie Leibovitz. So, why not? Queen Latifah definitely has the presence and vocal chops to pull it off. 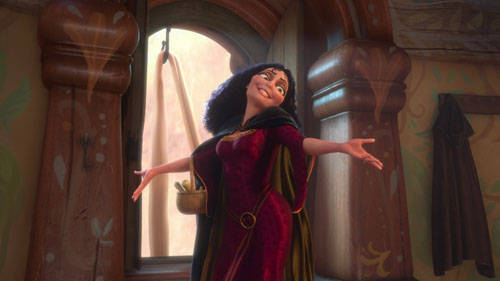 Ever since Tangled, the phrase "mother knows best" has taken a new twisted form. Mother Gothel, the first female villain since Ursula, has a special brand of manipulation compared to most Disney baddies. She loves playing the victim and uses over-the-top guilt trips, instead of just brute intimidation.  According to Disney trivia, Mother Gothel's style of dress is 400 years older than Rapunzel's, showing just how long Gothel has been living. Four hundred years of trying to keep your youth? There has to be some interesting adventures there. You don't just try to retain your youth and beauty for the heck of it. 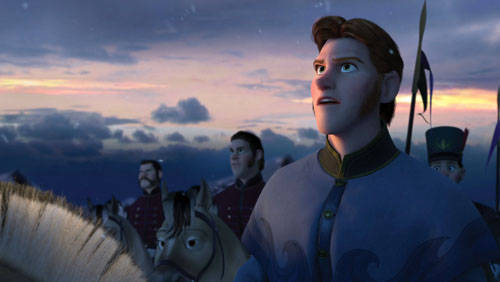 There's a rumor going around that Prince Hans was sincerely in love with Princess Anna, but was turned evil by the trolls since he was standing in the way of the trolls' eagerness to wed Anna and Kristoff. Since that's just a rumor, we'd like to go ahead and imagine Hans has long been a bitter, lying jerk. Disney continues the trend of neglect during childhood that drives Hans' hunger for respect and power. With 12 older brothers, we suppose that's quite understandable. Hans' character is an interesting one to explore. He's basically a subversion of the classic Disney prince and by betraying Anna and much of the audience, he's probably one of the most hated villains.

So what ever happened to the prince after his evil plot was uncovered? How did his older brothers punish him? We'd like to imagine he was sent into exile and that would make for a pretty hilarious (and perhaps moving) film, as Hans tries and fails to survive the world with his nobility stripped. We'd also like to imagine the handsome Armie Hammer (The Social Network, The Lone Ranger) bring Prince Hans to life.

Exploring the Underworld according to Greek mythology is a good enough reason for Disney to give Hades his own spin-off. Hades’ portrayal in Hercules was more comedic than and dramatic, but Disney probably could give Hades a darker twist, while still keeping his sarcasm and sense of humor. Tom Hiddleston, no doubt, would be perfect in this role-if he'd agree to playing a two-faced god again anyway. 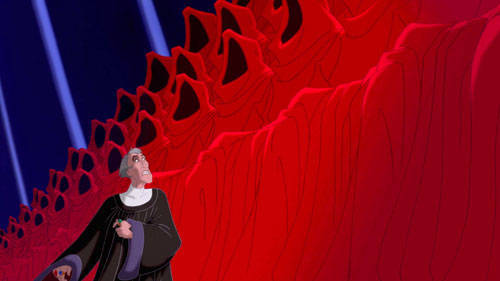 6. Frollo (The Hunchback of Notre Dame)

There may be no other Disney villain with more depth than Judge Claude Frollo. In fact, The Hunchback of Notre Dame may be one of the darkest mainstream Disney movies, dealing with matters of religion and racism, not to mention the startling images like the daunting Notre Dame Cathedral, the creepy gypsy hideout, and the scenes of Paris burning.

Deeply religious and self-righteous, Frollo believes that he must cleanse Paris of the gypsies and their "witchcraft and sorcery." He's rather sadistic too, and has his own version of the alphabet that he teaches to his adopted son, Quasimodo (A is for "abomination," B is for "blasphemy," C is for "contrition," D is for "damnation," E is for "eternal damnation"). Oh, and he's also tortured by his lust for Esmeralda, the beautiful gypsy girl. That's messed up, right there. Disney definitely has a lot of material to work with should they wish to resurrect Frollo. 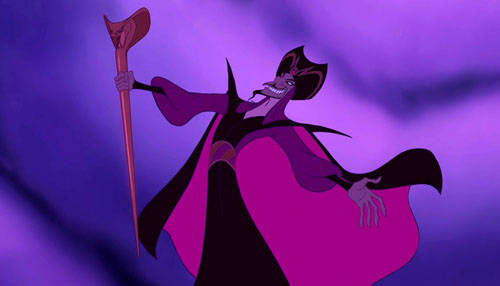 The once Royal Vizier of Agrabah is one cunning, cruel sorcerer, and his dramatic outbursts and creative ploys were some of the highlights in Aladdin. And you can't talk about Jafar without mentioning his wisecrack parrot sidekick, Iago. We have to wonder, how did these two meet? How did Jafar master his magic and get so close to the sultan? And, did you know that Jafar apparently has a twin sister named Nasira? We bet that's one sibling dynamic filled with enough tension and drama for an entertaining movie.

This eccentric, purple-loving ex-advisor to Emepror Kuzco is perhaps one of Disney's funniest villains. Her physical gags, gestures and schemes and frustration with her sidekick Krong provided plenty of laughs in The Emperor's New Groove.  Disney already produced a direct-to-video sequel, so maybe we could get a prequel that focuses on Yzma and her rise to power. In our dreams, the great Tina Turner, who voiced Yzma, would agree to taking this iconic role. 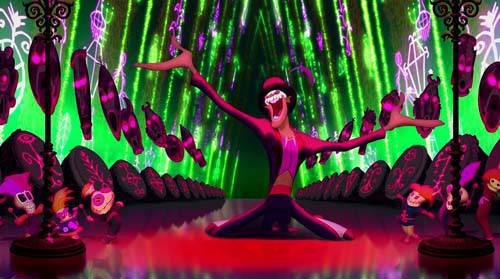 9. Doctor Facilier (The Princess and the Frog)

Dressed as Baron Samedi, the Loa of the dead of Haitian Vodou, Dr. Facilier may be the most stylish of the Disney villains, we can't deny that. In the original script, the charismatic "Shadow Man" was supposed to be Mama Odie's (the voodoo priestess who helps Tiana) son who followed the path of the dark arts instead. A showdown was set for them that would take place during Mardi Gras, but we all know that's not how the movie ended. But, hey, we sure would have loved to see that side of Dr. Facilier's story play out! 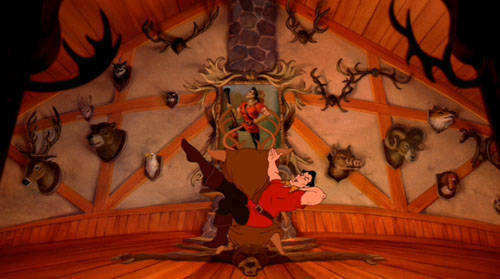 There's nothing sympathetic about Gaston-he's rude, arrogant, and chauvinistic. Naturally, his spin-off would make for great comedy fodder. Picture a Judd Apatow-type movie (maybe James Franco could play Gaston-he's definitely got the grin), with Gaston given perhaps a little more depth other than being a pompous man-child, and bring in LeFou and we could follow their antics at wooing the ladies and hunting.