20 Great Life Rules and Theories from How I Met Your Mother
Loading
Already a member? Log in
No account yet? Create Account
Spot.ph is your one-stop urban lifestyle guide to the best of Manila. 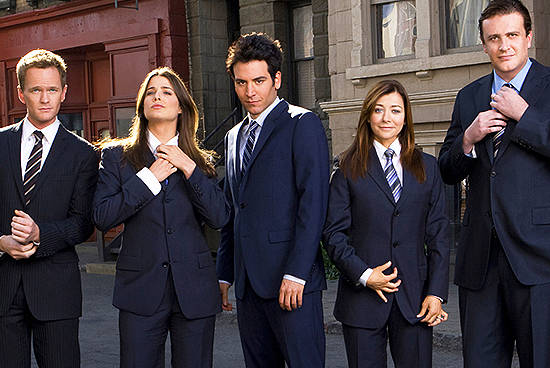 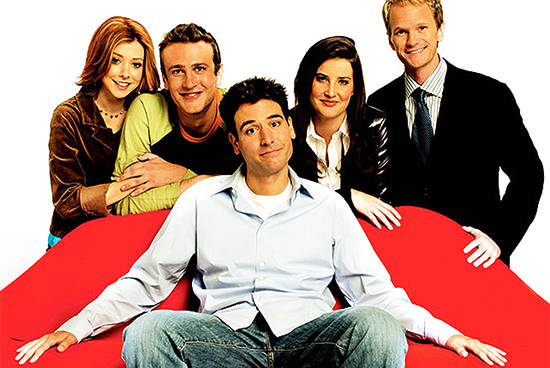 (SPOT.ph) We finally meet the mother, Tracy McConnell, but (spoiler alert), she's been dead for six years. Ted Mosby has been going on for nine years, telling stories that have more to do with his friendship with Lily, Marshall, Barney, and, wait for it, Robin Scherbatsky than the love he has for the woman who gave birth to his children. The finale left many fans outraged, and for good reason. The last season was about the wedding of a couple we've been waiting to get together for the last...oh, six years? And then they get divorced within 15 or so minutes of the final episode? And then Ted's kids tell him to go to Aunt Robin? What the fish? How are you okay with your dad being more in love with Aunt Robin?

A week after the polarizing finale, we've taken a chill pill and we're wearing our graduation goggles. Remember that? How I Met Your Mother may not be the greatest North American series of our generation (it's Breaking Bad, or so we're told), but it did leave us indelible grains of wisdom.

Here are 20 of the best rules and theories of life from HIMYM!

The theory: When something (e.g. a relationship) is about to end, you start ignoring all the horrible things about it, making you feel like it's worth holding on to (when it really isn't). 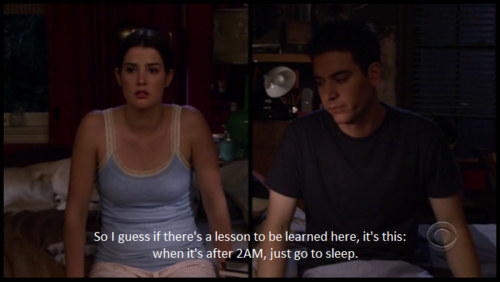 The rule: Nothing good happens after 2 a.m.? 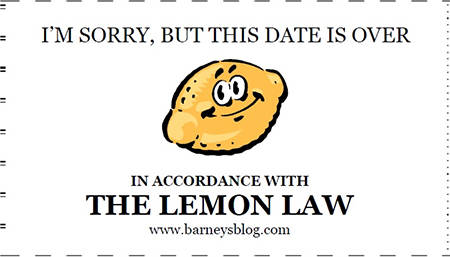 The rule: The Lemon Law is an actual state law in the US, which protects buyers who purchase "lemons" or cars that are found to be defective only after they are bought. Barney applies this to dates, stating that a person has five minutes within the date to decide whether it continues for the rest of the night or not. A date warranty, if you will.

The theory: The ideal couple is made up of one person who hates one thing (e.g. olives), which the other likes. This proves that they complement each other. Or so Ted thinks. The theory has been disproven within the show, sadly. (It would still be very nice to have someone who eats bits of dishes you don't like!)

The rule: When a couple is in a fight, either party can call for a pause to allow them to function in life as though everything is fine. It's epecially handy when you find your lover irresistibly desirable when you're in an argument, allowing for some smoldering sexy times.

The theory: If you receive a grand gesture from a person you like, it's a Dobler (as in Lloyd Dobler from Say Anything). If you don't like the person, it's just creepy (as in Jeffrey Dahmer, the serial killer / Milwaukee Cannibal).

The rule: Fresh is better than stale, duh.

The theory: Better known in the real world as The Honeymoon Phase, that precious early part of relationships when everything is fabulous...and couples just want to rub it in everyone's face. (This will fade.)

The theory: In every relationship, there is a reacher (the person who goes after someone out of their league) and a settler (you would like to think this is you). 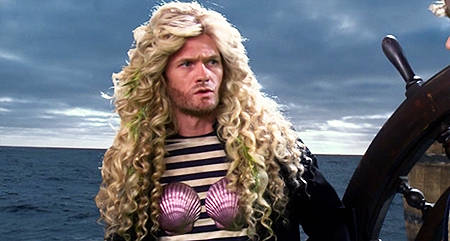 The theory: Being friends with the opposite sex is hard, and according to The Mermaid Theory, given enough time, a guy will want to sleep with a female friend...or any woman he knows-for reasons.

The theory: There's that one ex you have (or someone from your past) who reverts you to the kind of person you were when you were with them.

The theory: On February 13, women will substantially lower their standards enough for the schmuckiest schmuck out there, to avoid being alone on Valentine's Day. 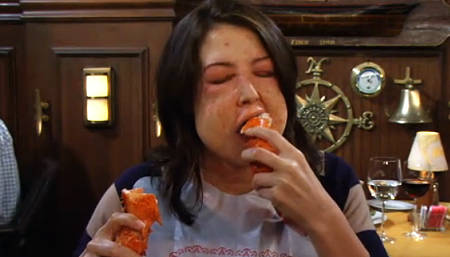 The theory: Locally, this is known as "masarap ang bawal," that is, prohibition makes the conquest more pleasurable. This started when Robin found out that she's allergic to lobster, making her want lobster more than ever.

The theory: Ladies, you basically turn invisible to men when there's an engagement ring around your finger.

The theory: Gents, this is the scent of lust seeping out of your pores.

The rule: Upon receiving the number of a potential partner, one has to wait three days to make the call. According to Barney, this has Biblical basis, as Jesus rose from the grave after three days. Holy high five!

The theory: A person dates someone who is the complete opposite of the last person s/he was in a relationship with, as a manner of compensation.

1. Don’t go anywhere that has candles.

2. No sharing food-in fact, anything involving saliva is off limits.

3. The most important rule is no lying to the spouse about anything you do.

The theory: According to Barney, the rules that will keep a girl from transforming into a girlfriend is the same as the rules that apply to Gremlins. They are as follows:

1. Never get them wet. (Never let them shower at your place.)

2. Keep them away from sunlight (Don’t ever see them during the day.)

3. Never feed them after midnight. (She doesn’t sleep over, and you don’t have breakfast or brunch.)

How I Met Your Mother Himym