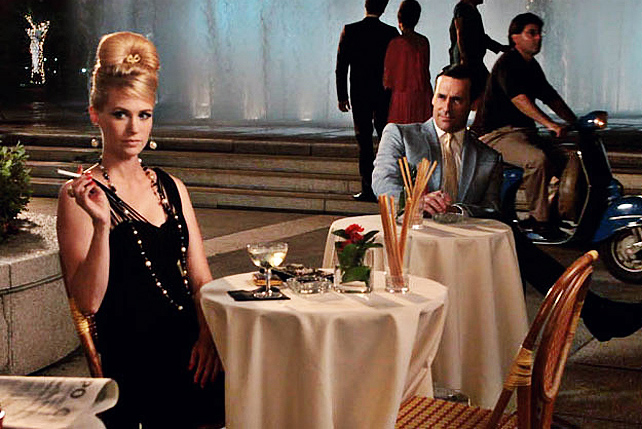 Make yourself an Old Fashioned and settle in for our trip down Mad Men memory lane.

(SPOT.ph) The final season of Mad Men begins this week and as we prepare to say goodbye to the series, which began in 2007, we’ve picked 10 of our favorite scenes from the past 6 seasons. The multi-award winning show, created by Matthew Weiner, has given us quality storytelling beyond the offices of ad agency Sterling Cooper (eventually Sterling Cooper Draper Pryce) as well as some of the best performances from Jon Hamm, Elisabeth Moss, Christina Hendricks, Vincent Kartheiser, and John Slattery, among others. So, narrowing down this list to 10 was quite difficult. But, these are certainly some of the series’ best moments that will linger in our memories long after it ends.

In the season 3 episode "My Old Kentucky Home," Jane and Roger Sterling throw a party at the country club, where the Campbells show off their (very 60s) moves. It’s a great reprieve from all the drama to see this particularly dramatic couple (okay, what couple on Mad Men isn’t dramatic?) just let loose.

From the secreterial pool at Sterling Cooper to being a copywriter at  rival agency, Cutler, Gleason, and Chaough, Peggy has come a long way. In her early days as the only female copywriter (since World War II) at Sterling Cooper, Peggy asserts herself against the patriarchy-even if it’s demanding that she’s let in the boys’ pot session.

While at work, Joan’s creep of an ex-husband serves her with divorce papers and the formidable Director of Agency Operations at SCDP breaks down. She turns to the poor receptionist and smashes a model airplane on her desk. Just a sample of one of the many injustices to which the magnificent Joan Holloway has been subjected to by men. You really can’t blame her for getting a tad upset, and it gave us one of the season’s best lines.

Despite getting fired, we hope to see the return of Sal Romano in the final season. The former art director at Sterling Cooper was a closeted gay man, which was pretty much one of the worst things to be during the 60s. One of his most memorable scenes was acting out an ad for Patio Diet Cola in front of his wife. It’s an amusing and heartbreaking scene, with Kitty realizing a truth about her husband as he pouts and dances in front of her.

At a party with his wife, Roger takes LSD for the first time. While the rest of the guests seem to be under the drug’s spell, Roger is not convinced. He gets off the couch, pours himself a drink...and he hears music flowing out of the bottle. The trip leads us into the inner workings of Roger’s mind, but the pivotal moment of  the high is when he has his  first honest discussion with his wife about their marriage.

6. Don and Betty in Rome

In the course of the series, we’re shown many sides of the marriage between Don and Betty, but it’s this scene from their trip to Italy that’s a favorite. It’s incredibly sexy and fun, when they both do a little role-play, pretending to be complete strangers. It’s a break from the drama boiling beneath the relationship and it’s perhaps their last real, romantic night together before they eventually split up.

Sally has always had a close relationship with her father, in contrast to her complicated relationship with her mother. But, it’s after this moment, when Sally stumbles upon Don doing the deed with his neighbor, Sylvia Rosen, that really breaks young Sally Draper’s innocence. Poor Sally is going to have some stories to tell for her future therapist.

In the aftermath of discovering her father’s affair, Sally shares a rare moment of honesty with her mother, telling Betty that her father has never given her anything. She’s also allowed her first cigarette!

Don hates celebrating his birthday, but his new wife, Megan, gets him to enjoy it with a surprise song and dance number. Good luck getting that song out of your head, by the way.

Mad Men isn’t always serious business, and it’s proven in one of the funniest scenes from the series, when office secretary Lois takes the lawn mower for a spin and accidentally runs it over the foot of the young, up-and-coming executive, Guy MacKendrick. Warning: Blood! Lots of it.

Lest we forget, Mad Men is about an advertising agency, but it seamlessly blends together the business and the drama behind the guys who run the business. In one of Don Draper’s most memorable pitches, he shows to Kodak executives the magic and beauty behind their simple slideshow machine. At the core of the pitch is nostalgia, which Don defines as "the pain from an old wound," and it’s definitely what we’re going to feel when the series concludes.