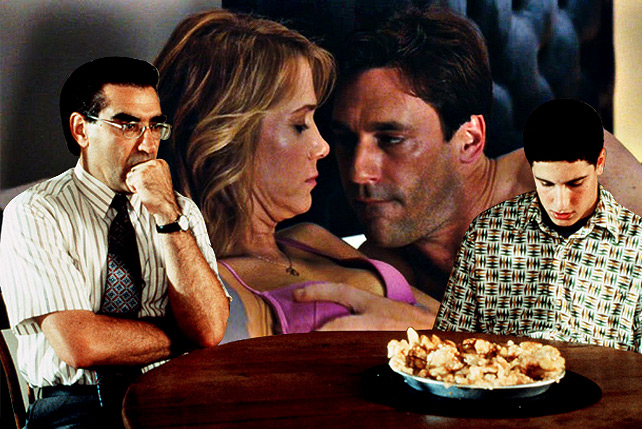 Here’s a checklist of the silliest sexy times on screen. Which ones have made you LOL? 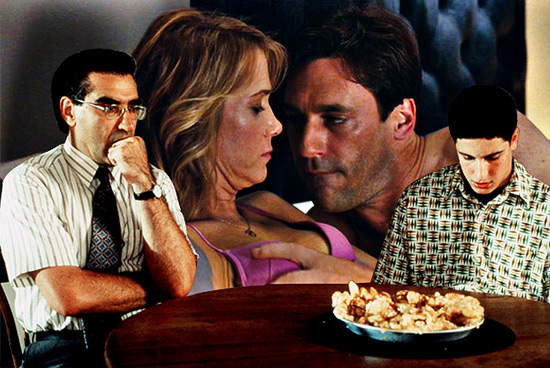 (SPOT.ph) In the early days of romance in cinema, audiences were only granted passionate kisses that would end in slow fades to black. It’s the 21st century now, and the movie industry is more (all right, very) liberal when it comes to portraying sex scenes. Not that we mind a well-choreographed scene of intimacy between two consenting adults-but sometimes, an awkward O-face or bizarre dirty talk will elicit laughs from moviegoers. We’ve selected our picks among the most hilarious sex scenes on film and television. And it goes without saying that some of these clips are NSFW (not safe for work).

The study group plays a round of Dungeons & Dragons and a seduction scene suddenly comes into play. In the midst of their make-believe quest, the gang encounters a maiden. "Hector the Well-Endowed," ironically played by one of the girls, Annie (Alison Brie), bravely takes on the sexual encounter. It’s 55 seconds of sweet melodies over some incredibly strange gestures between Annie and Abed, the game’s Dungeon Master.

Theodore Twombly (Joaquin Phoenix) is a lonely writer fresh from a breakup. One night, he seeks a bit of company from other lonely souls in the city. One of them (voiced by Kristen Wiig) just so happens to have a strange fetish for asphyxiation and cats.

Sex is often messy and awkward, and it takes place in the bedroom. Ron Burgundy (Will Ferrell) and Veronica Corningstone (Christina Applegate) take lovemaking to its extreme with a montage that’s straight out of a trippy video game.

McLovin (Christopher Mintz-Plasse) finally gets some loving, but his cop friends (Bill Hader and Seth Rogen) execute an incredibly embarrassing cockblock. Fun fact: Mintz-Plasse was only 17 when Superbad was filmed, so his mother had to be on the set-yup, even during this scene.

To help keep Brandon’s (Dan Byrd) sexuality a secret from high school bullies, rumored slut Olive (Emma Stone) pretends to deflower him. It’s not real sex (as if any of these scenes on our list are authentic anyway), but it’s legitimately hysterical.

Jon Hamm stretches his comedic muscles (among other things) in Bridesmaids as Annie’s (Kristen Wiig) casual lover, Ted-who’s into some weird kinks, like monkey sounds and reliving high school memories, while in the middle of sex. What would Don Draper say?

There’s nothing quite like good actors pretending to be terrible at acting. This sequence from Zack and Miri leads to an actual sex scene, but the bad puns and bizarre dancing are a total riot.

We’re so sorry, but how could we not include this all-time classic?

Movies Tv Sexscenes
Your Guide to Thriving in This Strange New World
Staying
In? What to watch, what to eat, and where to shop from home
OR
Heading
Out? What you need to know to stay safe when heading out