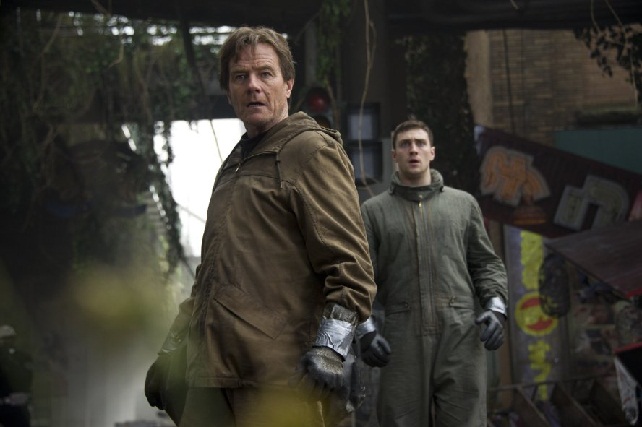 SPOT.ph blogger Paul Daza on a renowned monster’s milestone of a remake.

STORY: At a Philippine mine in the year 1999, scientists uncover evidence that a Massive Unidentified Terrestrial Organism-a MUTO-has awakened after a long slumber and disappeared into the Pacific Ocean. Flash-forward 15 years later to 2014, and the gigantic creature has left RP-our old, statelier initials, by the way, as opposed to PH which also stands for a radical in chemistry. But the creature is apparently stirring to life again in Japan, with deadly results. At the same time, another MUTO starts cutting a swath of catastrophic destruction in the USA, killing hundreds as it makes its way to San Francisco. Just when it seems that humanity's only option is to nuke the insect-like MUTOs dead comes word that a third gargantuan creature, Godzilla, is headed toward his fellow monsters, hopefully to destroy them and "restore balance," as a Japanese scientist puts it. 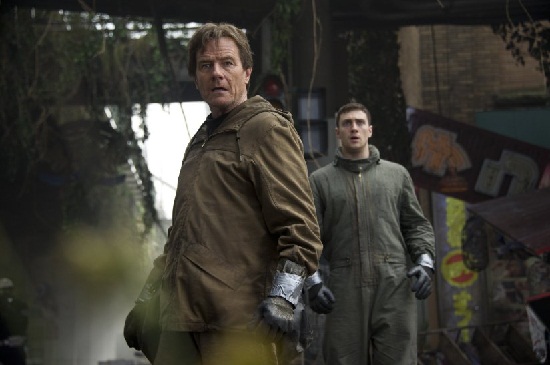 Cranston in a chemical suit. Hmm, where have we seen that before? Photos from the movie’s Facebook page

Bryan Cranston as the obsessed physicist. As an admirer of Cranston's award-winning work in the supremely satisfying TV series Breaking Bad, I'm not ashamed to admit that I felt a jolt of fanboy "kilig" when the actor said the words, "the Philippines" in his first few seconds of screen time in Godzilla. As the nuclear physicist in Japan whose wife becomes a MUTO's collateral damage, Cranston provides the heartbreaking, emotional core that makes this Godzilla more than just your typical creature feature. Before Godzilla makes his first appearance halfway into the 123-minute movie, it's Cranston's moving portrayal of a widower obsessed with who or what killed his wife that is the movie's most attention-grabbing sight-or visual effect, if you will.

The Philippines' primal role in the plot. Though the Godzilla film crew faked the Philippine sequences by filming them elsewhere, I appreciate the fact that they cast extras who looked like Filipinos for the quarry scenes. Listen carefully to the sequence set inside the mine and you'll even hear a couple of Tagalog lines in the background as the Japanese scientist played by Ken Watanabe explores the cave. That's a long way from the Bette Davis starrer The Letter (1940), supposedly set in Malaya but featuring Tagalog-speaking extras.

Gareth Edwards is serious...very serious. One ingredient I despised in Roland Emmerich's 1998 Godzilla movie was its campy humor. Particularly unfunny was the mayor of New York character, who was, bizarrely enough, modeled after film critic Roger Ebert. Gareth Edwards, the visionary director of this 2014 reboot, makes no such jokey missteps in his 60th anniversary tribute to this beloved creature from Toho Pictures. Desperation, terror, and death pervade the film, as befits a tale where hundreds of people in Asia and the USA are engulfed and destroyed by behemoths. Edwards is also smart enough to make his destruction sequences more topical by filming them like real-world catastrophes that are no laughing matter. Among the real tragedies he alludes to are the Fukushima nuclear disaster, the 9/11 attack on New York, and the 2004 Indian Ocean tsunami.

The stunning, never-before-seen carnage. Half the box-office battle of any creature feature is won when moviegoers are shown something they've never seen before, and Godzilla is chockfull of such astonishing set pieces. The tsunami that Godzilla triggers when he emerges from the ocean is just one of the movie's many "holy shit!" moments. Smaller, almost incidental details showing fighter jets dropping like flies from the sky-and a shot where two creatures are wrestling one another as Chinese lanterns pay silent witness to their earth-rattling bout-reveal director Gareth Edwards' gift for injecting shots with unexpected details that make them shine like new. True, some of the action is reminiscent of last year's Pacific Rim, but Godzilla has a trump card in the shape of Godzilla himself. As a fan who saw his first Godzilla movie in the '70s, I certainly had a stronger emotional investment in his fate than I did in the kaiju-fighting Jaegers of Pacific Rim. The difference between the two films is that where Pacific Rim was about characters and creatures I had just been introduced to, Godzilla was about an old friend who had been humiliated (in Roland Emmerich's 1998 movie), a friend whom I was eager to see pick himself up and regain his dignity.

Soldiers with their puny guns never learn, do they?

The Spielberg homages. Gareth Edwards may have a knack for crafting unfamiliar shots that moviegoers have never seen before, but he also knows how to enrich the viewing experience by paying tribute to cinema titans like Steven Spielberg. Edwards' Godzilla is enlivened by numerous references to the characters, dialogue, and shot compositions of such Spielberg creature features as Jaws, Jurassic Park, Close Encounters of the Third Kind, and War of the Worlds. Even the film's one funny incident (see the earlier item regarding Godzilla's unrelenting seriousness) is a classic Spielbergian gag-taking off from the insights of Antoine de Saint Exupéry's The Little Prince-about how children are much more observant than adults.

The info-overloaded opening credits. Godzilla must have the busiest opening title sequence of any movie ever. As a montage of mushroom clouds and strange goings-on in the Pacific from decades past are projected, expository lines referring to a coverup are then superimposed on these clips. These intriguing statements and phrases are then quickly whited out/ "snopaked" over before one has read them, until only the cast and crew credits are left onscreen. All in all, a headache-inducing start to what (thank goodness) eventually became a more coherent movie. 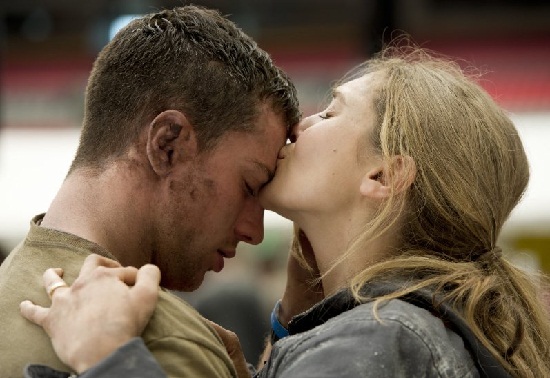 A sweet kiss between siblings Elle and Ford Brody.

The underutilized actors. If you're an actor in Godzilla and your name isn't Bryan Cranston, chances are you won't be remembered when it's all over.

The first smackdown where nothing happens. Thanks to director Gareth Edwards' masterful buildup, we moviegoers are all stoked and salivating for that moment when Godzilla will finally face off against the two MUTOs. That moment takes place about 100 minutes into the movie, as the sun sets in San Francisco. Godzilla and one MUTO see each other, and ATTACK. To create more suspense and prolong the audience's anticipation, Edwards then cuts away to show what the puny humans are doing to counter the monster threat. The action then shifts back to the monsters many minutes later ...we know this because it's now dark. But guess what? Godzilla and his adversary don't seem to have made any progress in their mano a mano. It's like they went back to their dressing rooms when the camera cut away from them after showing them lunge at one another.

Godzilla is currently showing in cinemas.

Godzilla Bryan Cranston Godzilla2014 Ken Watanabe Aarontaylor-johnson Elizabetholsen
Your Guide to Thriving in This Strange New World
Staying
In? What to watch, what to eat, and where to shop from home
OR
Heading
Out? What you need to know to stay safe when heading out