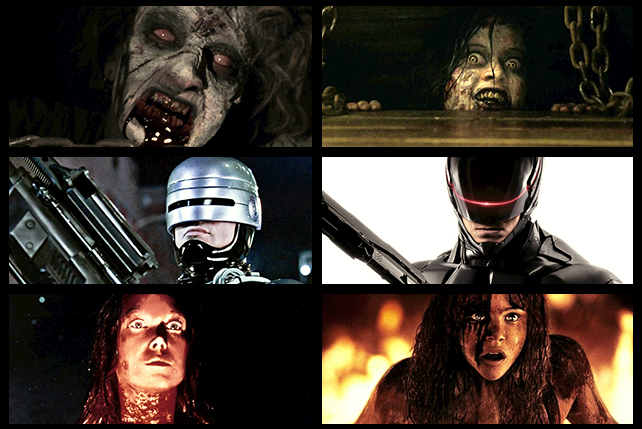 10 Movies and Their Remakes: Which is Better?

Total Recall, Carrie, and Robocop-are the original films always better than the remakes? 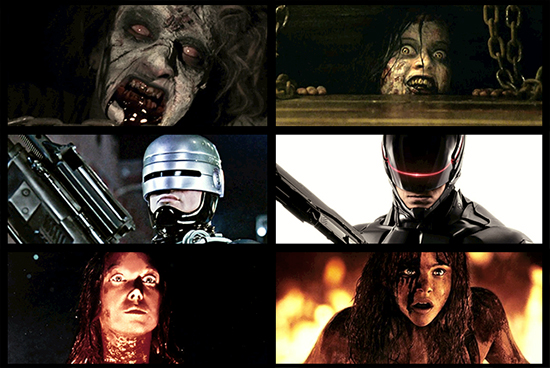 (SPOT.ph) Did you like Peter Jackson’s take on King Kong? Did you feel like The Amazing Spider-Man was a completely unnecessary reboot? Hollywood studios are remaking films left and right, but although they receive a lot of flak for it, they do come up with stuff like Ocean’s Eleven...which you have to admit was pretty good.

We’re listing 10 remakes to test Hollywood’s batting average on recreating the magic of a great film. Are all originals better? Let’s find out! 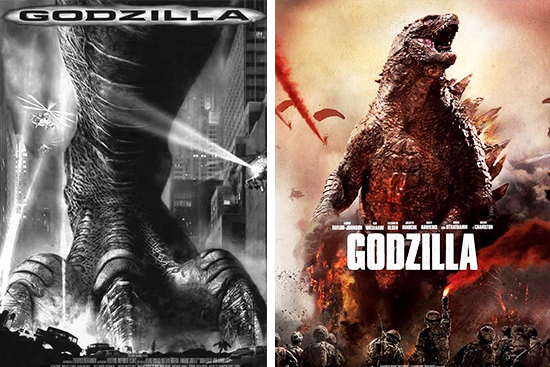 Additional Notes: Both films are adaptations of the original Japanese character, Gojira (ゴジラ).

The 1998 version consciously departed from the original Japanese franchise, which probably made some sense during preproduction, but the cast and crew soon found themselves with Golden Raspberries after everyone saw what they did to the "beloved" monster. Godzilla was a lot slimmer in the first US version, shaped more like a T-Rex who likes going out for a swim. Its main gripe against humanity? We're messing with its eggs. Not even Matthew Broderick's boyish charms could save this film.

Bigger and with a rounder bottom, Godzilla stomped its way back to Hollywood. This time, they paid an homage to what Gojira is all about-a gigantic creature that the audience will see very little of during the first half of the movie. The cast got an upgrade too, with the very pretty Aaron Taylor-Johnson taking the lead (you might remember him as Count Vronsky, the dude Anna Karenina left her husband for...or that nerdy-buff guy from Kick-Ass). Godzilla reclaimed his title as the King of Monsters and fulfills his destiny as humanity's punishment (because we're such dicks to nature).

Winner: The remake (of the adaptation), for quite obvious reasons. Virtually everything about the remake is better-from the effects to the story. 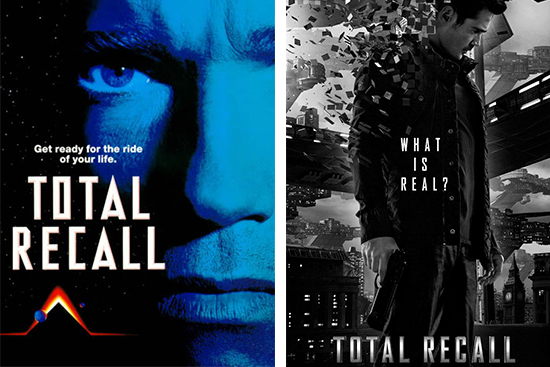 Additional Notes: Both films are adaptations of Philip K. Dick's short story, We Can Remember It for You Wholesale.

A seemingly ordinary construction worker plays the memory game and tries not to lose. Arnold Schwarzenegger stars as Douglas Quaid, who discovers that he has a much more interesting other life as a secret agent! The movie is somewhere between campy and serious (alien with three boobs is campy, complications of life in Mars is serious), but Verhoeven handles the material gracefully. Iconic scenes include Douglas Quaid's costume malfunction and Vilos Cohaagen's death sequence on the surface of Mars.

The first thing you need to know about this remake is that it does not involve Mars. They did away with the campiness of special effects and focused more on the serious themes of memory loss, identity, and political mumbo-jumbo. The deviation earned it a few thumbs up from critics, but the lack of humor made fans of the old film feel left out. Hardcore science-fiction fans make up the majority of the remake's defenders.

Winner: It should be a tie, but for recall, the original defeats the remake. Wiseman's version isn't bad-it's just not as memorable as the first. 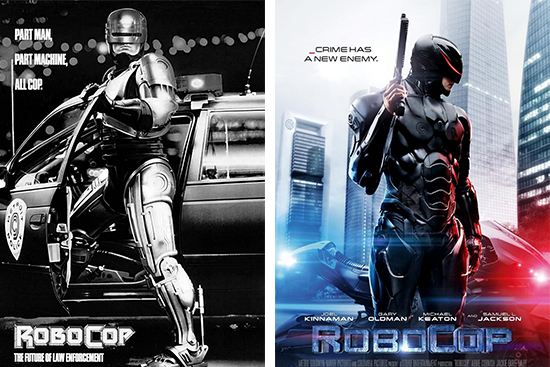 It's campy but ultraviolent-a very Verhoeven signature in film-although it's still hard to understand how something that involves so much death was marketed to children. RoboCop blew a lot of people's minds with its daring portrayal of corruption, and the seemingly ridiculous "part man, part machine, all cop" premise became an iconic character.

This movie has Gary Oldman and he makes all the difference. The remake involves less violence and inserts an enormous amount of humanity into the story. Fans of the franchise will never admit it, but the themes of corruption, gentrification, and media bias were handled with more depth in the remake.

Winner: The remake, because the plot was more cohesive. (Admit it.) 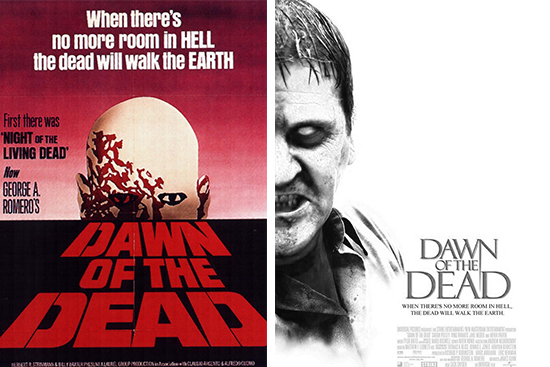 Original: Released in 1978, directed by George A. Romero

Zombies! Raaa. Much slower than the running ones we've grown accustomed to, George A. Romero's second Living Dead film received praise from critics for showing what humans do to each other, even in the face of possible extinction.

The only thing that the remake has over the original is special effects. That's about it.

Winner: Despite having somewhat laughable makeup, the original film offers more insight-making it a clear winner. 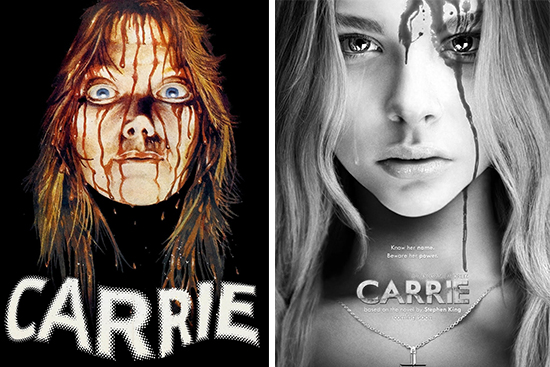 Sissy Spacek's eyes during that prom sequence? Genuinely frightening. Everything about the film screams dated, but somehow, that just adds to its creepiness. By now, almost everyone knows the ending (even the promotional materials for the film gives it away), but it’s still strangely exhilirating to see Carrie unleasing her wrath.

The remake is a little more faithful to the book than the first Carrie film, but it lacks the peculiar vibe that De Palma's adaptation exuded. Too much of the kinks were ironed out and the story played out as a bland tale of revenge.

Winner: Although both are good films, Sissy Spacek will scare you more than Chloë Grace Moretz. "Hit Girl" is just a little too pretty to be scary (further evidence: Let Me In, an adaptation of Let the Right One In). 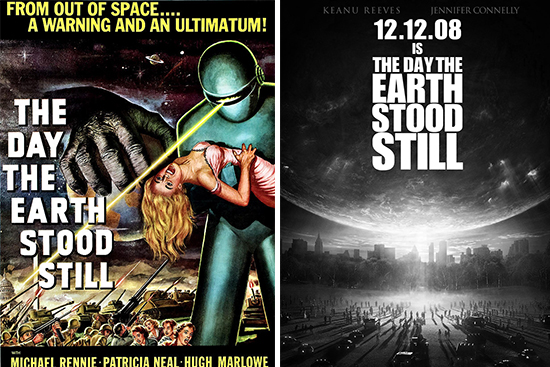 6. The Day the Earth Stood Still

Additional Notes: Both films are adaptations of Harry Bates' short story, Farewell to the Master.

Aliens invade earth! Well, no, not really. Instead of an invasion, a humanoid visitor warns the human race that they need to stop being such violent creatures, for their own benefit. The rest of the universe is bothered by the destructive tendencies of men and views the species as a threat that needs to be eliminated. Yikes. The movie features two iconic sci-fi characters, the alien Klaatu and his robot, Gort.

This one has Keanu Reeves, who attempted to make Klaatu more human-a clear folly on his and the screenwriters' behalf. Where the original script sends a chilling message about how we're going to implode if we don't stop being such...humans, the remake tells a wishy-washy "humanity isn't all that bad" story.

Winner: For boldly calling out humanity's failures, the original wins this fight. The remake is terrible. 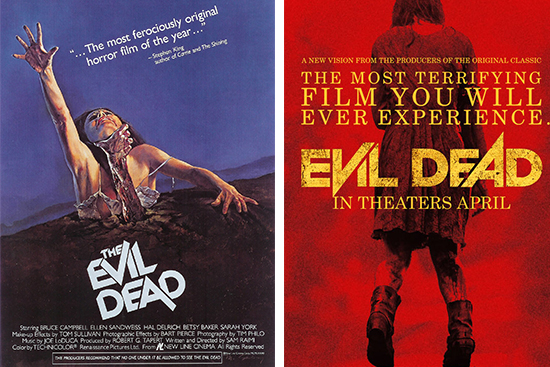 Original: The Evil Dead, released in 1981, directed by Sam Raimi

Oh, Ash Williams. You're one of the most awesome heroes in all of violent-horror cinema. When you picked up that chainsaw, we cheered for you. When you had a fight with your own arm, we fought with you (in spirit). Sam Raimi's original trilogy has aged well, with the superb prosthetics still pretty disgusting even by today's standards.

Oh...dear. Much like Wiseman's dissent from Verhoeven's campiness in Total Recall, Alvarez opted not to mimic Raimi's humor. Instead, the remake assaults the audience with incredibly disconcerting images of gore, including a scene with a nail gun and a woman mutilating her own face. We could tell you everything that happened in the 92-minute running time and you'd still feel unprepared for the film. Just the memory of it makes us shudder.

Winner: It's a tie! This is a reasonable conclusion, since Raimi handpicked Alvarez to reboot his series anyway. 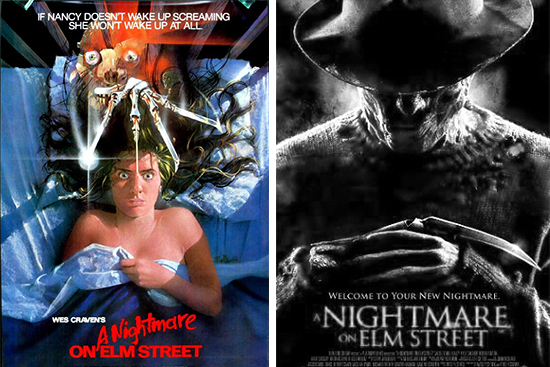 8. A Nightmare on Elm Street

Johnny Depp, before he was dirty. You can actually see his face here, without any make-up obstructing the view. But more importantly: Freddy Krueger. He didn't give people nightmares-he made people afraid of sleep. What a predicament. Craven's commentary on puberty and parenting problems earned him praise from critics and the lack of a humanizing history for Freddy Krueger sealed his place as one of cinema's few true psychos.

Freddy Krueger, child molester! It adds another layer of creepy to the character and brought him back to the realm of sincerely scary (as opposed to the joke he has become in his later years). Played by Jackie Earle Haley (Rorschach, Watchmen), the mass murderer didn't utter a single funny one-liner in the remake and was back in the business of being scary. Unfortunately, the remake had one too many twists ("Freddy's a good guy!" and then, "Oh no, wait, he's not!") and offered nothing new to the franchise and its fans. 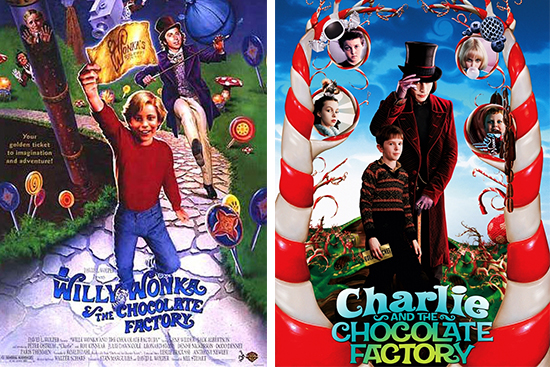 9.  Charlie and the Chocolate Factory

Additional Notes: Both films are adaptations of Roald Dahl's novel, Charlie and the Chocolate Factory.

It deviated from the novel (this didn't sit well with Roald Dahl) and was initially a commercial disappointment, but the film has acquired a modest cult following...mostly because of Gene Wilder's trippy interpretation of Willy Wonka.

Remake: Charlie and the Chocolate Factory, released in 2005, directed by Tim Burton

The reaction is somewhat mixed, but thanks to loyal fans of the Depp and Burton combo, the film enjoyed moderate success. Freddie Highmore made for quite an adorable Charlie Bucket...and the rest of the cast, especially Deep Roy, were all quite memorable too.

Winner: The Dahls, including the daughter of the author, Lucy, favored the remake. But Gene Wilder was amazing! This one is a tie. 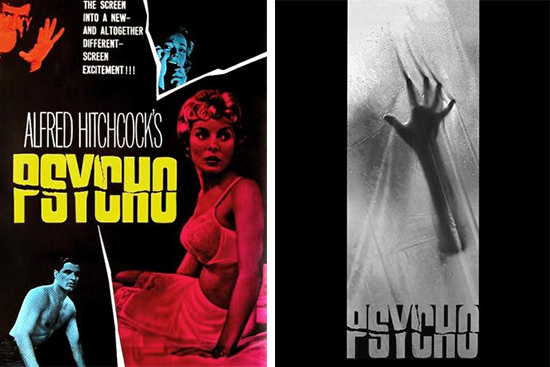 One of the most famous sequences in a shower, Marion Crane's demise is also one of the most memorable deaths in cinema. Hitchcock meticulously worked on the details of the film, hiding the twist from the audience as long as possible. The film pushed boundaries (some silly ones, including being the first mainstream film where a toilet being flushed can be seen) and turned almost everyone involved in it into stars. It also has the most LSS-inducing score. Eek! Eek! Eek!

This film is an updated but almost shot-for-shot remake of the ’60s classic. People were baffled when it came out, questioning the point of this "homage." It was a critical and commercial bomb, but Van Sant shrugged off the criticism, saying that it was all an experiment. He told the New York Times that he wanted to prove that "you can't copy a film." And he did.

Movies Remakes Godzilla Robocop Carrie Totalrecall
Your Guide to Thriving in This Strange New World
Staying
In? What to watch, what to eat, and where to shop from home
OR
Heading
Out? What you need to know to stay safe when heading out